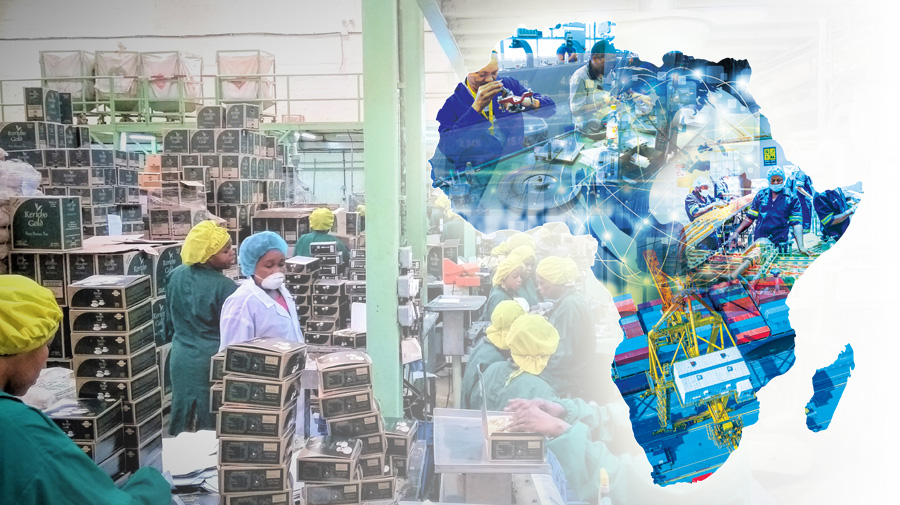 Intra-African trade is the average export and import activities among African countries. According to the African Development Bank, trade between African countries has the greatest potential for building sustainable economic development and regional integration. And yet, while trade might be the path to development, the statistics in Africa aren’t too impressive. Intra-Africa trade hovered at around 15.2% in the period 2015–2017, while comparative figures for America, Asia, Europe and Australia were respectively, 47.4%, 61.1%, 67.1% and 7.2%. Nonetheless, Africa, along with Asia, is the only region with a rising trend in intra-regional trade since 2008.

Regional trade integration remains a strategic objective for intra-Africa trade yet. But despite some efforts in reducing tariffs within regional communities, the African market is still very fragmented. A series of non-tariff and regulatory barriers continue to raise the cost of transactions and create restraints in the movement of goods, services, people and capital across borders throughout Africa. These barriers continue to limit the growth of intra-regional trade in Africa.

To further elaborate on the dismal nature of this situation, the Economic Commission for Africa (ECA) once quoted: “the reality on the ground is that transport costs in Africa are still among the world’s highest. For example, shipping a car from Japan to Abidjan costs US$1,500 (including insurance); shipping the same car from Addis Ababa to Abidjan would cost US$5,000.” This illustrates the high cost of transportation in Africa, mostly due to the inadequacy of rail and road networks that were built to convey primary goods to the ports by old institutions during the colonial era. Due to the inadequate nature of trade routes, much of the continent remains unconnected, thereby creating a high cost of cross-border business transactions. This unconnected nature of the continent demonstrates the need for institutional reformations that promote the connectedness of African countries.

Why we need reforms

Regional integration that exclusively emphasizes the removal of tariff and non-tariff barriers, by itself, is unable to fulfil the obligations of promoting intra-Africa trade but should be accompanied by progressive economic structures such as; the acceleration of institutional transformation, the building of productive capacities and the unleashing of the potential of the private sector. Without developing these economic structures, African countries will remain unable to develop the economic capacity needed to drive effective intra-African trade.

The establishment of the African Continental Free Trade Area (AfCFTA) indicates advancement in Africa’s journey to forming an integrated market. This process will culminate in the realization of an African economic community, in accordance with the Abuja treaty. This realization process will create unpleasant short-term modification costs, yet with long term benefits that outweigh the costs in the African Continental Free Trade Area. Such short term costs are; temporary job losses from shrinking economic sectors that require redeployment towards expanding sectors and lost tariffs to governments that rely on domestic resources. Moreover, long-term economic benefits will emerge from unleashing the potentials of regional value chains to stimulate industrialization, promote technological sophistication, boost economic growth and create decent jobs in the formal sector.

Traditional trade theory suggests that free trade areas provide for multiple formations, and eventual spread of trade; creating a net positive effect on economic welfare in the region (Viner’s theory). When goods move freely across African borders, there will be an increase in competitive pressure amongst regional industries and new opportunities for task-based production focused on global markets can be created. This opportunity can help export-oriented industries learn how to enter more distant foreign markets, find international suppliers and customers, and build great markets.

It is, therefore, imperative that both African governments and Africa’s development partners empower African regional organizations to lead and generate coherent regional development strategies that support trans-border developments and resolve collective actions amongst member states. With effective regional integration, African industries can get the necessary support from regional institutions to promote a “made-in-Africa” brand in the global market.