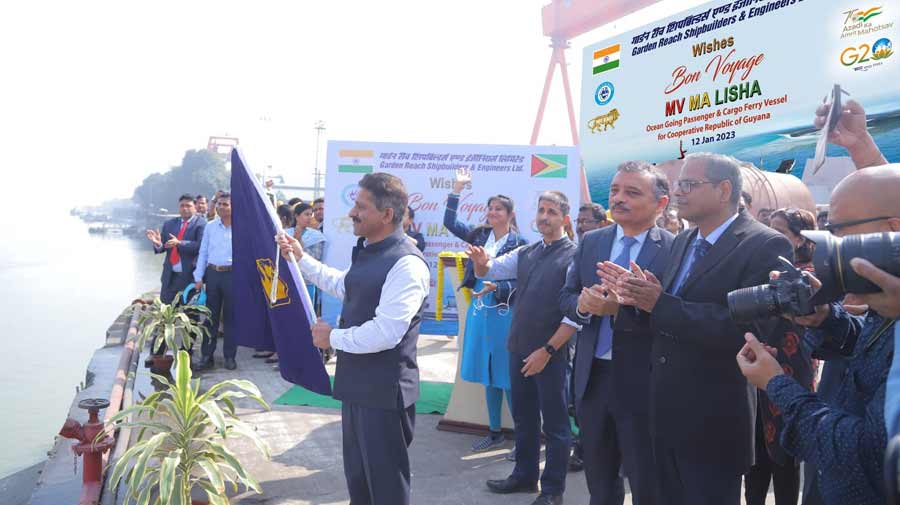 Closely following the Ship’s Commissioning Ceremony, Cmde P R Hari IN (Retd), Chairman and Managing Director, GRSE, flagged-off ‘MV Ma Lisha’, a Passenger-cum-Cargo Ocean Going Ferry built by the shipyard for the Cooperative Republic of Guyana. This is the first such ship built for exports to a Latin American country by any Defence Public Sector shipyard. The MV Ma Lisha, designed and built by GRSE, will move towards Chennai and once at Chennai, she will be loaded onto a semi-submersible vessel MV Sun Rise for her long voyage to Guyana. ICGS Kamla Devi is officially the fifth and last vessel of the series of FPVs designed and built by GRSE as per the specifications of the Indian Coast Guard. GRSE is the only Indian shipyard to achieve the unique distinction of delivering 100 warships and this ship is the 108th warship to be delivered by GRSE since 1960 when it became a Defence Public Sector Undertaking. GRSE is also the first shipyard to export a warship the Offshore Patrol Vessel MCGS Barracuda to Mauritius back in 2014.

ICGS Kamla Devi is 48.9 meters long and 7.5 meters wide with a displacement of 308 Tons. With three engines and water jets, she is capable of a top speed of 34 knots and an endurance of over 1,500 nautical miles. She also has an Integrated Bridge System and is fitted with a 40/60 gun as the main armament. The ship has advanced habitability features with fully air-conditioned accommodations for 35 personnel. Like her sister ships, ICGS Kamla Devi will patrol the seas and carry out anti-smuggling, anti-poaching and search and rescue operations as and when required.

In his address during the Commissioning of ICGS Kamla Devi, Cmde Hari, Chairman and Managing Director, GRSE, thanked the ICG for providing an opportunity to conduct the event within the premises of the shipyard that built the ship. He also added that today being the birth anniversary of Swami Vivekananda, is perhaps the most auspicious day for a ship to be commissioned into active service. Cmde Hari also stated that so far GRSE has delivered 36 ships to the ICG and the shipyard is fully seized of the aspirations of the ICG in terms of fleet expansion and expressed his confidence that GRSE would be a major partner in the growth plans of ICG.

DG Pathania ICG, in his address, stated that the ship is being commissioned at a very opportune time to meet the formidable challenges that emanate from the sea. Complementing the design of the ship, he added that its highly ergonomic state-of-the-art equipment adds to the prowess of ICG’s capabilities for undertaking a multifaceted task as defined by the Coast Guard mandate. He also expressed his sincere appreciation to team GRSE Kolkata, for the remarkable effort towards the delivery of the ship within the contracted timeline.

On 13 Jan 21, GRSE and T&HD, Government of Guyana signed the contract for the construction of the Ocean-Going Vessel. The Shipyard bagged this prestigious export contract through competitive bidding. The ship was launched on 15 Jun 2022 by Mrs Joan Edghill the spouse of Hon’ble Bishop Juan Anthony Edghill, Minister of Public Works, the Cooperative Republic of Guyana and within six months GRSE achieved the ‘Technical Acceptance’ of the vessel on 16 Dec 22. The 70 m long vessel with a displacement of 1700 Tonnes is propelled by two diesel Engines and Twin Disc Gear Boxes to achieve a maximum speed of 15 Knots. The ship has been designed by the GRSE in-house design team and can accommodate 294 passengers (including 14 crew members) along with 14 cars, 02 trucks, and 14 containers & cargo. The vessel shall operate in the coastal and riverine area of the Northwest District of Guyana. The Indian-built vessel plying in Guyana would herald better ties between the two nations.

During the Flag off Ceremony of the Ocean-Going Passenger & Cargo Ferry Vessel for the Cooperative Republic of Guyana, Cmde PR Hari, IN (Retd,), CMD GRSE mentioned that the project is very unique as compared to other projects where the shipyard has adopted a unique strategy by partnering with a smaller shipyard by evolving an effective PPP model. He complimented the Design, Quality Assurance and Project Management teams for their stellar efforts in ensuring the timely completion of the project.

A few months ago, GRSE became the only defence shipyard in the country to receive the Raksha Mantri Award 2022 for designing the most silent ship for the Indian Navy for Anti-Submarine Warfare operations. Earlier, we received the Defence Minister’s Award for Excellence for In-house Design Effort for the Offshore Patrol Vessel exported to Mauritius and ‘Best Performing Defence Shipyard of India’ for Four Years in a row.

GRSE is on a growth path, pursuing its vision to be globally acknowledged as the ‘Best Shipyard in India’ and reaffirming its motto “In Pursuit of Excellence and Quality in Shipbuilding” while upholding the Atmanirbharta pledge.