G-20 Presidency: Can India reverse the Discontentment with Multilateralism 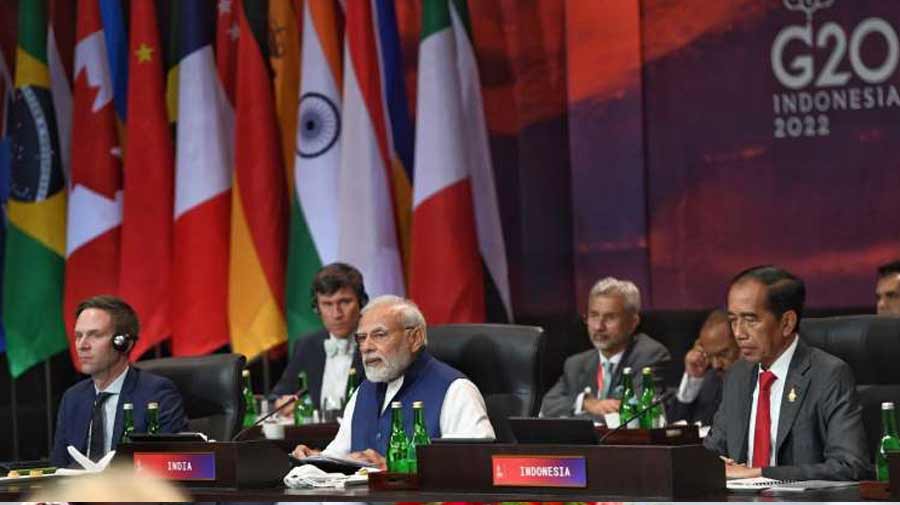 G 20 Presidency will be an opportunity for India to reinstate the dwindling faith in multilateral frameworks. Apart from steering the economic and financial ills of the world through the unfinished project of recovery from the pandemic, India is also being looked upon as a peacemaker between the belligerent camps of the Russia Ukraine war.

“Vasudhaiva Kutumbakam” is the quintessence of India’s slogan for the G20 which is encapsulated by “One Earth, One Family, One Future”. Symbolically, mother earth resting on the lotus flower represents India’s aspiration to transcend boundaries of all kinds and aim for humanity’s collective good.

Although the G 20 is not a grouping to address global security issues, but with the UN failing as the prime security provider, platforms like the G20 are being looked upon with hope. The UN, the world’s largest multilateral organisation, has not been able to reform the Security Council. Likely solutions to world conflicts are choked by the “veto impasse”. Inefficacy of the UN system has majorly contributed to the waning of multilateralism world over.

The second factor that has contributed to the decline of multilateralism is the changing global order itself that is characterised by a rising multipolarity. How are these two linked?

Multipolarity describes the distribution of power in the international system. Highs and lows aside, it has been the age of the unipolar world after the end of the cold war in 1991. But around the turn of the century when the US dominance on the global order was challenged by non state actors and more specifically by the financial crises of 2008, the world has been witnessing a rise of other power centres. The rise of China is clearly the most significant challenger to US pre eminence but so is the rise of regional power blocks like the European Union, the ASEAN, the BRICS etc. that have been playing an important role in shaping the values and outcomes of the international order. The return of Russian dominance in East Europe has fundamentally affected transatlantic ties. The war in Ukraine has forced the European Union to systematically build a more robust European security architecture to fend for itself and protect its economic interests.

In financial terms, a key characteristic of the multipolar world is that economic and financial market trends are becoming less US-centric and more multipolar in nature. A report by Morgan Stanley described that a multipolar world is already driving changes in correlations for industrial production cycles, global commodity prices, and bond and equity market returns.

However, there is a potent caveat. The multipolar world is more prone to clashes and conflict in the absence of effective multilateralism. The way out is to strengthen the weakened role of multilateral institutions. UN Secretary-General Antonio Guterres has famously argued that “multipolarity without multilateralism is just anarchy.” While Guterres’s intentions may be genuine, UN cannot fit the bill anymore. It requires a strong credible leader to successfully navigate the collective interests of all.

India’s presidency of the G 20 is focused on enriching multilateral initiatives that deliver on the collective interests and concerns of the Global South by forging consensus with the developed world.

In a historic first, the G20 Troika after 1 December 2022 will comprise of developing countries for two successive years- in 2023 with India, Indonesia and Brazil and in 2024 with Brazil, India and South Africa.

It is, therefore, indeed a moment for the Global South to set the tone for G20 issues. It is also a moment for regional groupings to seek greater economic convergence on sustainable developmental goals.

Disruption in food supply chains has triggered a surge in costs of living. As a result, the prices of grains, staple cereals, oilseeds, and fertilizers are skyrocketing beyond control and annual global inflation has risen to 6.7 per cent this year. India’s presidency of the G20 will be focused on these issues. Differences over energy diversification and the emerging challenges in trade and technology will also need reconciliation by a credible player like India. Policy coherence in macroeconomics and trade shall be a key ponderable.  As the world brainstorms over global commons, the G20 led by India shall be focusing on global health architecture, sustainable energy transition, and digital transformation. India will also get an opportunity to push its initiatives for clean energy partnerships and green transitions, especially solar, wind and hydrogen, in coordination with partners like Japan, US and the EU.

G20 has failed to coordinate policies around the global health architecture. Coordination in ensuring equitable access to vaccines and pharmaceuticals has been highlighted time and again. However, a wide gap remains in terms of global production and distribution of Covid vaccines and diagnostics among advanced and emerging and low-income economies. Similarly, there is a considerable difference of opinion on a variety of issues from Climate Change and WTO reform that India would try to solve multilaterally and come up with solutions that are accepted by all.

G 20 may not be the perfect multilateral forum with all the answers to global ills. But it is a powerful, rapid response crisis management group with a unique size and flexible structure.

If used optimally, it can deliver on several objectives that promise collective good. India’s presidency is coming at a unique moment in history. Today, India is known to shape important conversations not only for itself but from a position of a responsible and credible global player as well. With a worldview rooted in multilateral collective action, G 20 under India could infuse a new hope in a world marred by divisions and conflicts.