Fiji’s election and India’s stake in the region 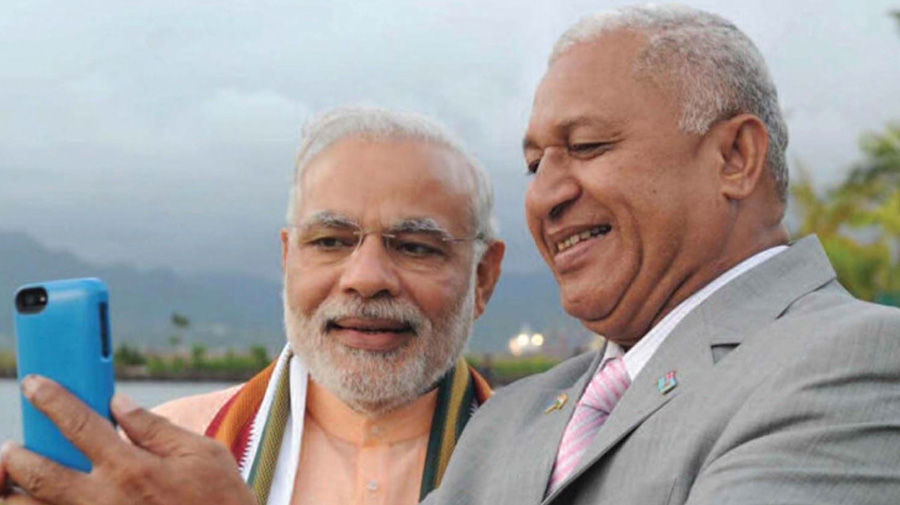 The outcome of the Fijian elections will have a profound effect on how India will revisit its strategic approach to the South Pacific in general and in Pacific Islands in particular.

At present, there is no clear winner in the Fiji elections which means there will be a chance of political instability in the island elections.

India has good relations with the present incumbent Fijian government however it may change with profound strategic cooperation with China. The election in the tiny Asia Pacific island is closely being watched by China, the United States and India, as the results could have long-term effects for all three nations. It is also left to be seen if these elections bring some stability after years of political upheaval.

In recent years, China has been committing more and more money in the region, particularly in the form of loans. It has also established a strong foothold in the country — presently, there are around 10,000 Chinese living there, a Confucius Centre located at the regional University of the South Pacific, as well as the presence of Chinese state media in the capital city.

Meanwhile, Fiji is a country which lacks skilled labour for its economic advancement, especially in areas like hospitality, medicine and information technology. India is far advanced in terms of technology and it will help facilitate that technological impact in Fiji in the upcoming years.

India will revisit the scope of the diplomatic missions in the South Pacific region and promote developmental activities there. The Look East policy will be extended to cover the South Pacific Ocean in general and Fiji, in particular, to effectively deal with China’s increased interest

After Fiji was expelled from the Pacific Islands Forum, China encouraged it to be an active participant in the Melanesian Spearhead Group and even provided funds for the establishment of its secretariat. It’s expected that Fiji in the upcoming years will be what Singapore became in South East Asia. Fiji will act as a connecting point between the Australasian and the South American countries.

On the other hand, as India wishes to extend its influence in the Pacific Islands and South Pacific, it will develop it both in the Polynesian and Melanesian countries. To start with, earlier the Cook Islands were accredited by Indian High Commission based in Fiji. It’s understood that Fiji is the hub of the Melanesian country.

In the above context, India understands and the mental horizon has expanded and with worthwhile interest has included the Cook Islands within the ambit of New Zealand which has prominence in the Polynesian Group of countries.

India’s reach towards the Cook Islands in particular is interesting and it’s also a game changer. It’s a game changer for India if trying to reach all of the Pacific Island countries through the PIF may prove to be futile.

Further, reaching the Polynesian countries all by having one Diplomatic mission based in a Melanesian country might not be all that advisable. In that context, India also understands that Melanesian countries have extra luggage of Indonesian. Indonesian is in fact active participant in the affairs of the MSG. India has a complicated relationship with Indonesia in many facets.

India’s maritime profile includes Indonesia as an active partner strategic partner. However, India might be compelled to take a stand on Indonesia’s complicated relationship with West Papua.

West Papua’s voices are actively heard in both the PIF and MSG. In fact, Fiji itself has been at times embarrassed by Indonesia’s position towards West Papua.

In that context, India might be compelled to navigate a complex diplomatic manoeuvring and balancing its position towards Indonesian human rights stance on West Papua and also expanding its diplomatic reach further in the Pacific Islands.

Therefore, by adopting a flexible approach New Delhi has in fact scored high in politico-diplomatic manoeuvring.

Also, India understands by appointing Henry Puna the former Cook Island Prime Minister as PIF’s President; the Polynesians have scored high in the diplomatic game in the region.

Therefore, logically India understands that it can reach further into the region through its firm diplomatic routings based in New Zealand. This comes at a time when after the appointment of Henry Puna, the Micronesian countries have largely moved towards forming another block and this will complicate New Delhi’s interest in the Pacific Islands.

The Samoan election and further political drama was largely condemned by many Polynesian countries including the Cook Islands. These incidents are all looked at with interest from New Delhi. On the hand, coming back to the Fijian political situation it can be argued that India played a pivotal part in developing the constitution.

Coming to Fiji’s constitution, the legalities involved in that has got passed as Fiji interim Attorney General, Aiyaz Sayed-Khaiyum himself releasing the final version of the country’s new constitution.

The constitution which is a 98-page document which is available to the public on the internet is half the size of the Yash Ghai drafted Constitution which was presented to Fiji’s President on December 21, 2012 by the chair himself.

The new constitution was different in many ways, as unlike the provisions of the last constitution under which the last elected government Fiji had a Leader of the Opposition with one other member of his party and he himself had won his seat by a mere thousand votes. All these will be a thing of the past.

There are no provisions for specially reserved seats for anyone and in that context, it offers a perfect level playing field for candidates irrespective of their ethnicity.

As per the provisions of the September 2013 constitution, the elected parliament will have 50 Members of Parliament elected from a single national constituency – a daring electoral innovation for Fiji. The elected Parliament will be the supreme body for legislation and governance. The President elected by the Parliament is also the Commander-in-Chief of the Fiji Military Forces which includes both its army and navy.

The constitution provides a genuinely strong position for the Leader of the Opposition to be respected as the alternative Prime Minister of the nation. Despite the provisions of the fairness of Fiji’s constitution and which is now welcomed by countries ranging from India to Britain and even New Zealand, it has got some critics from other matured democracies in the South Pacific.

It’s to be noted that Fiji just benefited from the third wave of democracy in 1970 and so unlike the first waves to which the western nations benefited lacks time and so has the interference of outside power which hinders building an effective nation-state.

So far, Fiji has got three constitutions first in 1970, second in 1987 and third in 1997 which were reviewed culminating in the new constitution.

Unlike the earlier constitutions, which were under scrutiny for ethnic-related issues, the will to the present constitution came when present Prime Minister Frank Bainimarama and then Head of the Interim Military Government staged a ‘counter-coup’ to establish a functioning state in Fiji in 2006. The move had the support of the local Indians who in a way were fed up with the past politicians and looked up to the military to perform the internal executive function.

The above support in a way was one of the reasons why Frank Bainimarama has been able to continue in office and enable Fiji to function as a state despite external pressures from the regional forums and other countries in the South Pacific. This initiative on a positive note will culminate in having a stable constitutional democracy next year after the elections.

In conclusion, Fiji having culturally a rich past but a fragile near past will look for a bright spot in the future. It can be argued despite some tough challenges it has come a long way in promoting itself as a destination in the South Pacific to which India will also lend its helping hand after the elections.