Diplomatist > Regions > CIS > Home Featured > The Summit of the Organization of Turkic states will take place in Samarkand, Uzbekistan

The Summit of the Organization of Turkic states will take place in Samarkand, Uzbekistan 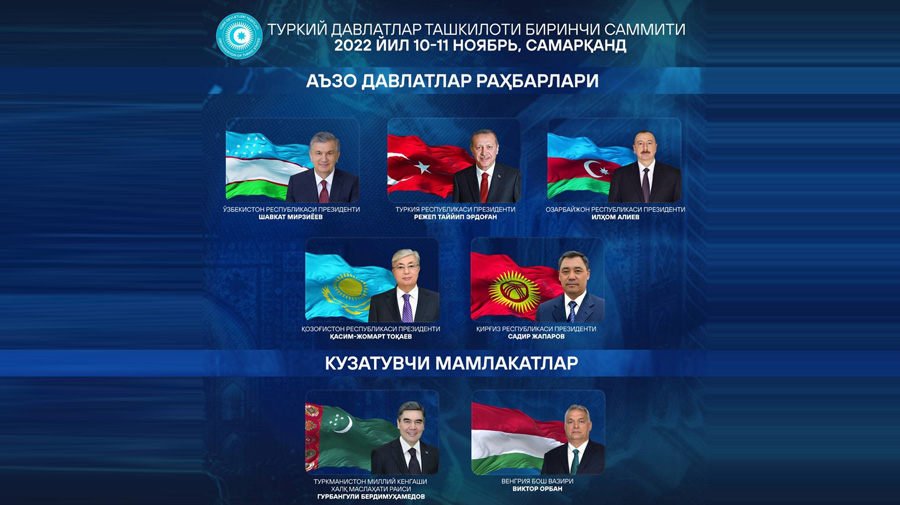 It is expected that the event will be attended by the heads of 5 member states of the Organization – Uzbekistan, Türkiye, Azerbaijan, Kazakhstan, Kyrgyzstan, and 2 observer states – Turkmenistan and Hungary.

The agenda provides for the discussion of issues of further accelerating cooperation in trade, economic, transport, culture and tourism sectors, as well as an exchange of views on international and regional issues. It is planned that more than 10 documents will be submitted for signature at the Samarkand Summit. The main document, the Declaration of the Samarkand Summit of the Organization of Turkic States, will embody the member states’ positions on the most important regional and global problems. Joint approaches were identified to ensure regional stability, security and sustainable economic development, strengthen transport links, and deepen cultural dialogue.

Following the summit, the chairmanship in the Organization for one year will pass from Türkiye to Uzbekistan. As part of the event, several cultural programs and the organization of bilateral meetings are planned to be held in Samarkand.

In today’s difficult situation, when the world is rapidly changing, cooperation between countries is becoming more pragmatic and dynamic. Regional organizations are replacing international organizations of a universal nature. Recently, many countries have given preference to collaboration within the framework of regional structures.

Most of these organizations create the most effective platform for cooperation between countries, taking into account national interests. One of them is the Organization of Turkic States.

There were three significant changes in the history of this organization. In 1992, a summit of Turkic-speaking states was convened, which was the first step towards the integration of the countries of the Turkic world. From 1992 to 2009, nine summits were held, and following the last summit, the Nakhchivan Agreement on the establishment of the Cooperation Council of Turkic Speaking States (Turkic Council) was signed. And in 2021, it was renamed the Organization of Turkic States (OTS). The upcoming summit in Samarkand is the first OTS summit and is of great interest. Today, the OTS unites five countries – Azerbaijan, Kazakhstan, Kyrgyzstan, Türkiye, Uzbekistan. Two more states – Turkmenistan and Hungary – have the status of observers. About 160 million people live in these countries, which is more than 2 percent of the world’s population. These countries account for more than 3 percent of global GDP at purchasing power parity.

The uniqueness of the OTS is expressed in the presence of multifaceted areas of cooperation in this organization. In particular, according to Article 2 of the Nakhchivan Agreement, issues of strengthening and maintaining peace and security, as well as political, trade and economic, law enforcement, environmental, cultural, scientific and technical, military-technical, educational, energy, development of effective regional and bilateral cooperation in transport and credit are among the important goals and objectives of the Organization. In turn, cooperation within the framework of the OTS is aimed at creating favorable conditions for trade and investment, further simplifying customs and transit procedures, as well as enhancing cooperation in science and technology, education, healthcare, culture, youth, sports and tourism, popularizing the great cultural and historical heritage of the Turkic peoples.

Six structures operate under the OTS to achieve these goals. They are the International Organization of Turkic Culture, the Parliamentary Assembly of Turkic States, the International Turkic Academy, the Turkic Culture and Heritage Foundation, the Turkic Chamber of Commerce and Industry, the Representative Office of the OTS in Hungary. Such an organizational structure is aimed at effectively executing the tasks assigned to the OTS.

The economic efficiency of cooperation within the framework of the OTS can be seen in the example of Uzbekistan. In 2021, Uzbekistan, together with the OTS states, carried out trade operations worth $9.3 billion. Their share in Uzbekistan’s foreign trade exceeded 22 percent. In general, compared to 2016, in 2021 the volume of mutual trade turnover increased almost 3 times.

In our opinion, it is advisable to identify the following areas of cooperation as promising areas:

The first direction is the expansion of economic ties and an increase in the volume of mutual trade turnover. Economic issues are the most pressing today. Strengthening of the economy should cover the implementation of joint projects, improvement of infrastructure and other important measures. This goal is in line with the strategic document “Turkic World Vision 2040” adopted at the 8th Summit last year. This document demonstrates the importance of creating favorable conditions in the OTS countries, taking into account economic integration.

Within the framework of this direction, it is promising to create an Investment Fund and a Development Bank under the OTS. Such projects will assist countries in coordinating their activities and managing investments more effectively. From the point of view of trade cooperation, attention should be paid to the removal of economic barriers to trade along the East-West corridors through the Caspian Sea. In our opinion, the phased implementation of the Turkic Corridor is important, within which it is desirable to simplify and harmonize customs procedures. Work in this direction has begun. In November 2021, a pilot project “Digital TIR” was launched between Uzbekistan and Kazakhstan, and in March this project also covered Kyrgyzstan.

The organization managed to launch the ePermit project between Uzbekistan and Türkiye for the first time in the world, and at the next stage, there is an agreement to implement this project together with Kazakhstan.

In addition, together with the Economic Commission for Europe, work is underway to introduce the eCMR tool in the OTS countries.

In this direction, the expansion of investment projects is of great importance. In particular, the implementation of mutually beneficial investment activities is in the interests of the member countries of the organization, including Uzbekistan. The participating countries of the OTS in 2017-2021 invested $2.5 billion (this is 10 percent of the total foreign investment for the corresponding period) in the economy of Uzbekistan. Of these, more than $1 billion, or 41 percent, were invested in 2021. Starting from 2017, the growth of investments from the CIS countries to Uzbekistan is 30 percent.

The second direction is digital transformation. Today, digitalization is becoming one of the most important areas for the development of any country. Therefore, this issue is most relevant for OTS. The goals in this direction were outlined in the strategic document “Turkic World Vision 2040” in 2021. In particular, the document provides for the creation of interregional digital communications, which will improve the telecommunications infrastructure.

The third direction is strengthening cultural and humanitarian ties. Historically, the peoples of the OTS countries have the same roots. Therefore, the expansion of cultural and humanitarian ties are of particular importance for the OTS countries, in particular, cooperation between education and scientific institutions, academic exchange, and joint cultural events. In this regard, it is necessary to enhance cooperation areas within the organization for the joint development of Turkic culture and art.

In conclusion, we can say that the OTS is a promising regional organization that unites Turkic-speaking countries and has development prospects in many areas. Therefore, for all members of this organization, including Uzbekistan, the strengthening of mutually beneficial cooperation within the framework of the OTS can serve to ensure comprehensive development and stability, increase economic growth and stimulate the development of countries.