India and France in the Indo-Pacific 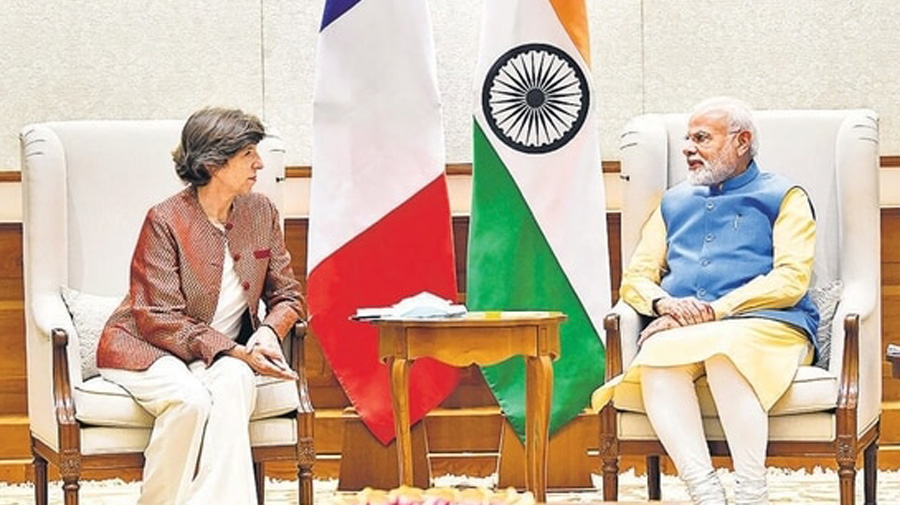 India and France established their strategic partnership in 1998. They have shared mutual concerns on a range of international issues which gave an impetus to their growing bilateral relationship. France has always supported India on various issues, even when India conducted nuclear tests and the entire world was against it.

Today, the world is characterised by crisis and uncertainty. In such circumstances, France’s priority is to promote a multipolar world order based on the ideals of rule of law and it believes that the Indo-Pacific region can play a significant role in this. At present, 93% of France’s Exclusive Economic Zone (EEZs) are present in the region which is also home to around 1.5 million French people (Indo-Pacific Region: a priority for France, 2022). France also recognises the fact that a power shift has been in the process from the Atlantic to the Pacific. The region has gained geopolitical prominence and is leading globalisation today. Therefore, Indo-Pacific is an essential element of French diplomacy with India.

France’s Indo-Pacific Strategy: Past and the Present

President Emmanuel Macron, during his speech in 2018 announced his country’s Indo-Pacific strategy. The seven pillars espoused under this strategy included: settling regional crises; establishing strong partnerships with regional organisations, especially the Association of South East Asian Nations (ASEAN); strengthening France’s partnerships with China; improving bilateral relations with other powers in the region; contributing to to to in forums such as the Indian Ocean Rim Association (IORA); ensuring a presence in regional forums; and a commitment to the promotion of common goods, in collaboration with European Union (EU) -Asia Connectivity Strategy.

This year, France reduced the seven pillars of its Indo-Pacific strategy to four:

During the visit of Ms. Catherine Colona this September, India, and France agreed to set up a trilateral framework ranging from development projects to collectively dealing with global challenges like the Ukraine crisis. One of the three initiatives on which both the countries agreed is the “Partnership for the Indo-Pacific and a rules-based international order” (Press Trust of India, 2022) Under this, the ministers emphasised providing solutions for maritime security, regional cooperation, and healthcare among other. Mr. Jaishankar also acknowledged France as a vital “Indo-Pacific Player”.

Both India and France also issued a joint statement during the visit of Prime Minister Narendra Modi to France, where a great amount of stress was given to the Indo-pacific region. The statement reinforced their commitment to a conflict-free region and deepening of EU-India strategic partnership. Indo-France partnership in the Indo-Pacific region encompasses trade, defense, health and sustainability.

Balance of Power: France is aiming to implement a balance of power. The strategy document highlighted that tensions between US-China, India-China, Taiwan-China, and the South China Sea have made future geopolitical assumptions complex. In such a region, the chances of escalations are high. Ms. Colona also laid great emphasis on the significance of the Indo-Pacific in emerging geopolitics. Acknowledging the mutual concerns of both India and France, she addressed the Chinese threat in the region and decided to expand cooperation in the Indo-Pacific to ensure a balance of power. She also added that both France and India are against a world order where ‘might makes right.

China’s influence: Not only this, France even reinforced its commitment to push for a permanent seat in the UN Security Council. Mr. S. Jaishankar and Ms. Colona also expressed their desire to cooperate in other trilateral mechanisms such as the India-France-Australia and India-France-UAE. France also hosted a one-day Indo-Pacific forum this year where foreign ministers from EU member states met with foreign ministers of the Indo-Pacific region. This event aimed to mitigate the growing influence of China in the region.

Economic Potential: Indo-Pacific region is a great destination for French industries, especially defense. The region is also one of the largest importers of arms in the world. The arms market forms a great part of economic potential. Apart from this, energy, telecommunications, and transportation have a lot of potential for investment and partnerships (Parmar,2022).

Climate Change and Sustainability: The strategy document also highlights the growing vulnerability of island nations in the wake of climate change and emphasises the implementation of maritime cooperation to address it. The French readout also announced that India would be designated as the first “country of honour” for Sea Tech week, a vital international event attracting key blue economy stakeholders. This is a sign of mutual importance that both countries are assigned to the implementation of a blue economy and ocean governance. France also sent an expert to India’s National Institute of Ocean Technology. (Correspondent, 2022)

To conclude, France and the EU as a whole has recognised the importance of India to implement its Indo-Pacific region strategy. India too has been varying Chinese intentions in the maritime domain. Its growing footprint in the Indian Ocean has been a matter of concern. Beijing’s involvement in building ports, and road and rail links in countries like Sri Lanka, has also alarmed India. Scholars point out that these countries are increasingly getting trapped in debt, under Chinese influence. It is therefore in the interest of both France and India to develop an alternative model to China’s hegemony. As a consequence of these interests, India is continuously forging its ties with the US, Japan, and Australia and now France as one of its long-time strategic partners is a ‘natural ally’ (Phalnikar, 2022).

The Indo-Pacific Region: a priority for France. (2022, September). Ministry for Europe and Foreign Affairs. Retrieved September 25, 2022, from https://www.diplomatie.gouv.fr/en/country-files/asia-and-oceania/the-indo-pacific-region-a-priority-for-france/

Ankita
Author is currently serving as the President of India France Bilateral Council under the Women's Indian Chamber of Commerce and Industry. She is a graduate of Political Science from Lady Shri Ram College for Women, University of Delhi. She is also a Diploma holder in International Affairs and Diplomacy. She has been selected for highly prestigious conferences like the Harvard US-India Initiative 2021 and has published multiple papers. She has also been featured in DU Beat 21 under 21 list for her commendable achievements.
Tags:
Share:
Share this...