Ancient India and Ancient Greece: An exploration of the historical connections 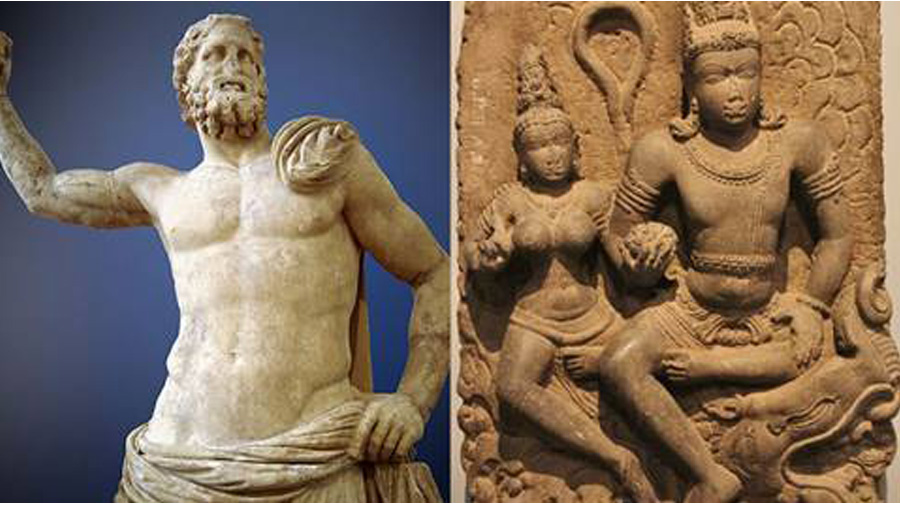 Today we find many similarities between India and Greece. One may say that it all started with the Gods – most Greek Gods lived on Mount Olympus, while Indian counterparts lived on Mount Kailash. Ambrosia in Greek Mythology and Amrita (Nectar) in Hindu Mythology was a drink of the Gods that bestowed immortality on those who drank it. Titan Helios, the Sun God rode a golden chariot across the sky that was pulled by seven bulls and Hindu deity Surya rode his flaming chariot across the sky that was pulled by seven horses. Let us now understand the historical connections between ancient India and ancient Greece.

The Greek expedition towards Persia leads to the advent of Greeks in India during the period from the 6th Century BC to the 5th Century AD. They came to India as merchants and traded to the Malabar Coast of Coromandel. They invaded the Indus and the Ganges, the Plateaus of the Deccan and the Beaches of Gujarat. They introduced industrial techniques, helped in the development of Astronomy and helped in building the great school of Gandhara sculpture. Indian astronomy impressed the Greeks to innovate the Zodiac sign. These inklings can be drawn from classical Indian literature of Mahabharta and Yuga Purana (Muhammad, 1963).

The Gargi Samhita of the Yuga Purana accredits as the mastermind of astronomy to the Greeks as well as the Aryabhata ascribes the Zodiac to the Greeks (Shumaila Firdos, 2017). Under the Greek astronomical tradition, India contributed to giving the name of the days to the week and the precise calculation of the length of a year. Rigveda, written approximately from 1700 to 1100 BC, has astronomical texts which were of interest to the Greek astronomers. Both Indian and Greek civilizations learned from each other and enhanced their scientific progress. The Greek scientists transferred the astronomical approaches into theoretical science.

In the Paitamaha Siddhantas “The detail of Greeks reflects a rather chaotic mix of Aristotelian and Babylonian notions invoked by various early Hellenistic theories that fell into oblivion after Ptolemy. Indian astronomers combined these concepts with other parameters and techniques in their astronomical tradition to produce the cosmological and computational

Aryabhatta the first great mathematician and astronomer introduced to Greeks, the calculation and rotation of the Earth related to the specific stars as twenty-three hours, fifty-six minutes and 4.1 seconds (actual 23:56:4.091) and the length of the year was 365 days 6 hours, 12 minutes 30 seconds was just 3 minutes 20 seconds out of the length of the year. This calculation is called of the sidereal year.

The discoveries of ancient Greece have contributed to astronomy in a big way. Anaxagoras (510-428 B.C) explained for the first time that the Moon shines due to the reflected sunlight. The Earth spins are attributed to Philolaus.

However, it was with the invasion of Alexander on India that we associate the role of the Greeks in India. Historians have mentioned that at the time of the invasion of India through the Passes of the Hindu Kush, Alexander came to know that a number of Greeks from Bactria had already established in the fertile mountains that overlooked the valley of the Indus. The historical literature also mentions that Bactria Greeks ruled the parts of India which were unknown to Alexander.

The arrival of earlier Greeks in India took place approximately two centuries before Alexander came to India. Their route of travel remained along the trade routes linking India, Persia, and Ionian cities of Asia Minor. Historians suggest that these journeys were glorified through expedition tales of the Greek gods Dionysus and Heracles. The glorified legendary tales of Greek expedition to India inspired Alexander to come to India in search of the great Ocean which he believed brought the world to an end somewhere beyond the Hindu Kush (Shumaila Firdos, 2017).

The validation of claim that Indo-Greek interaction took place long before the military campaign of Alexander can be verified through ancient Greek and Sanskrit literature. Sanskrit literature suggests these people as formidable warriors and conversant with the knowledge of science that was strange to indigenous people (Gauranga Nath, 1920).

Historical narrations of Indo-Greek interaction in ancient times are found in the classical Indian literature of Yuga Purana, Mahabharata and Buddhist literature. Greeks were called ‘Yavanas’ in ancient India. The military campaign of the Greeks mentioning their resistance against Sketa in Oudh, and annexing of Panchalas between the Ganges and the Jumna are elaborated in the Yuga Purana. However, their exact stay in Pataliputra is not known.

A play written by Kalidasa, ‘Malavikagnimitra’ expresses the Greeks’ military actions in north central India shortly before the birth of Christ (Shumaila Firdos, 2017). Yavana King, Bhagadatta, is mentioned in the Mahabharata. The Buddhist text, the ‘Milindapanha’ i.e., Questions of Milinda, mentions King Menander, a successor of the Greco-Bactrian king Demetrius who conquered large parts of northern India. Milindapanha is a philosophical dispute about Buddhism, between Milinda and the Buddhist sage Nagasena.

During the Ashoka reign, stupas were built all over India showing emblems such as a wheel, an empty throne, a pair of footprints, a pipal tree etc., which show the Greek influence on Indian sculpture which continued till the Gupta period. The Greeks are very famous for their innovative and anthropomorphic representation of the Buddha in Indian sculpture. The Greek initiation of sculpting the Buddha in human form matured and it became a major part of Buddhist iconography (Shumaila Firdos, 2017).

The Gandhara School of art and sculpture flourished in the lower Kabul valley and upper Indus side around the area of Peshawar and Mathura. Most Indian dynamic regimes regard that the presentation of Buddha images originated at Mathura, South of Delhi.

During the White Huns dynasty under their King Mihirakula, the tradition of Greek-o-Buddhist art in India was brought to an abrupt end. Monasteries were destroyed, monks were massacred and their bodies were left under the debris of their chapels. The sites of the former Greek cities were abandoned, their sculptures destroyed and the artists either killed or dispersed. And this brought an end to the Greek influence. However, a vestige survived in one Indian region where the Greeks had never ruled, i.e., in Kashmir until the tenth century A.D. Temples with Corinthian pillars were still being built in a degenerated Gandhara style (Shumaila Firdos, 2017).

The coins of Kanishka’s epoch are considered legends in Greek script and describe Greek Theology. Consequently, coins put up with legends in Bactrian, and the Kushana’s Iranian Language and Greek religious beliefs were substituted by corresponding Iranic ones. The modified Greek script was written on all Kushan coins that represented the words of Kushan and Kanishka (Allan J, 1936).

The Greek influence on Indian art, culture and philosophy cannot be ignored. With roots going as deep as 2500 years ago, one can only imagine the extent of the impact it has on both the countries, viz., India and Greece. Ranging from astronomy to mathematics, from art to sculpture, one can hardly assess where the influence of one stops on the other. Both civilizations have rich heritage and unique aspects which have added value to each other.

Allan J, A. (1936). Catalogue of Indian Coins In the British Museum, Coins of Ancient India,. London.