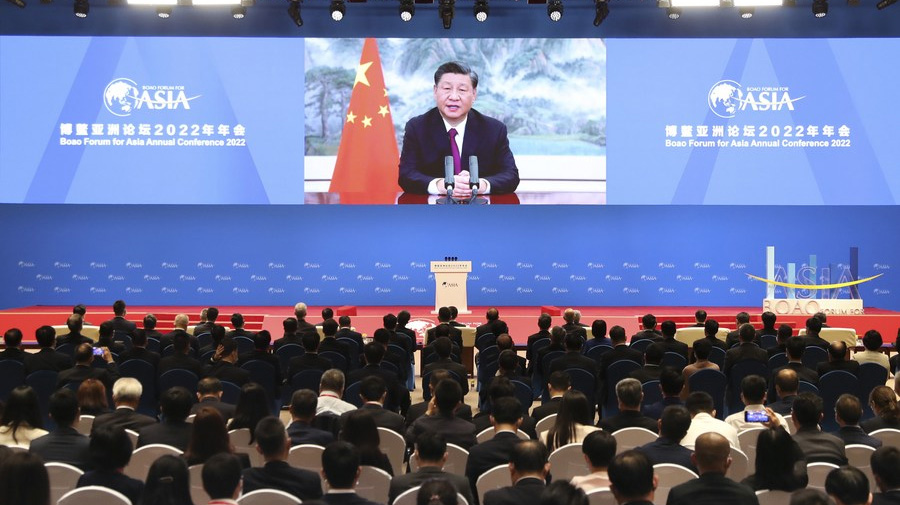 Charity begins at home: The true meaning of this quote has been revealed to the world by Chinese President Xi Jinping. Xi stated at the Boao Asia Forum in April 2021 that there is a need for a “Global Security Initiative,” and for the first time outside of the Russia-Ukraine crisis, he argued for Indivisible Security Principle.

Chinese President Xi Jinping introduced the Global Security Policy at the Boao Asia Forum in April 2021. According to the policy, ‘no state shall strengthen its own security at the expense of others.’ The policy is intended to counter the Indo-Pacific strategy and the Quadrilateral Agreement on Development (QUAD). It will stand for common, comprehensive, cooperative, and long-term security, rejecting bloc antagonism and group politics, and opposing unilateralism. Furthermore, the initiative’s goal is to protect the Indivisible Security Principle.

Like Xi’s other great ideas in the context of the world, which include the Belt and Road initiative and the Global Development Initiative, the global security strategy focuses more on general principles than specifics. According to China’s state media, “Global Security Initiative is a policy that is for the welfare of the entire world that contributes Chinese solutions and wisdom to address the world’s security challenge.

The idea of Indivisible Security was first coined in the year 1975 when the Helsinki Accord was signed at Conference on Security and Co-operation in Europe. The European Union and its member states expressed their willingness to uphold the status quo and safeguard peace by establishing the principle of equal and indivisible security. resulted in the formation of the Organization for Security and Co-operation in Europe (OSCE) According to this, Europe’s security should be considered as a whole. The recent situation of the Russia-Ukraine conflict prompted us to recall the Indivisible Security Initiative. The only reason for the conflict was Ukraine’s attempt to ensure its security at the expense of jeopardizing Russia’s security, which the indivisible security principle wholly opposes. Russian President Vladimir Putin emphasizes the Indivisible Holistic Security Principle. Beijing which was supporting Moscow on this principle has now mentioned the same outside the ambit of this conflict for the first time.

Global Security Initiative In The Context Of Russia And Ukraine

Countries present in the Eurasian region are landlocked and it is impossible to create a buffer zone as various members of NATO such as Estonia, Latvia, and the Baltic States share their borders with Russia. This leaves no zone which isn’t the alliance of the U.S. and west or is east i.e. Russia itself. Ukraine joining NATO will be like inviting the biggest competitors of Russia in power politics to have their nuclear weapons at their disposal on Russian borders. So, it’s the need of the hour to have an indivisible security system. This helps to prevent Russia’s security apprehensions and will also strike a balance between west and east.

A Fair Security Architecture is impossible as there is no regulating authority at the world level. UN breaths from the pockets of the U.S. which makes its stands and directions questionable; the P5 countries are in a race for power amongst themselves. The representation of third-world countries is negligible. This power race is played on various tracks such as that of defense, trade, economy, etc. and with the emergence of Russia’s invasion of Ukraine, it has also come to the combat field.

The Theory of Global Security Dilemma is brewing across this line which states that, when the increase in one state’s security leads other states to fear for their own security and in this context, it is related to NATO (North Atlantic Treaty Organization), QUAD (Quadrilateral Security Dialogue, includes, USA, India, Japan and Australia), AUKUS (Trilateral Security Pact between Australia, UK and USA)  on one side and CSTO (Collective Security Treaty Organization), SCO (Shanghai Cooperation Organization) on other side has fractured the world in two halves and countries such as India which holds a stake at both ends are in a position of dilemma. They are under pressure to choose a side. The citizens of the world could only sit across the shore and see how these countries navigate their ships in these heavy waters.

Beijing’s foreign policy starts focusing more on the idea of the Global Security Initiative introduced by the Chinese President. This made us clear that, through this new introduction to foreign policy, China seeks to use the Ukraine Crisis as an opportunity to push against U.S. dominated international security order. In light of China’s strategy, the United States must take the Global Security Initiative seriously both for its potential significance to the tenets that underpin European and Transatlantic security cooperation as well as for its implications for China’s pursuit of so-called core security interests, particularly in the Taiwan Strait.

China And The Indivisible Security Principle

China’s proposal for the Global Security Initiative and its guiding principles are motivated by the continuous, multiple crises occurring throughout the world. These crises include the downfall of economies due to the COVID-19 pandemic, and Russia’s invasion of Ukraine inflating commodity prices, and causing worldwide concerns about food and energy security. China desires to lead the world by upholding its national interests and incorporating the idea of a global security initiative into its foreign policy. This will help it establish its position as a rising superpower.

The United States and its allies, as well as China’s neighbors, are fearful of China’s dominant position as a world leader and are worried about their economy and security as a consequence of Xi’s new proposal.

Countries like the Philippines and Vietnam believe that China is not following the rules laid down in the theory of indivisible security principle. They asserted that China must actively negotiate maritime boundaries and grant access to some South China Sea resources, primarily fish and minerals, to adjoining coastal governments.

Along with China, India is also a rising superpower. In light of this, China must observe how the Global Security Initiative affects nations like India. Due to the significant border conflicts between India and China, India needs to have a clear understanding of how the indivisible security principle should be used in order to preserve relations between the two countries. And further, this indivisible security principle is applicable to Pakistan as well.

By proposing the concept of the global security initiative, China is attempting to prove that it has innovative ideas that are useful to the entire world.  Since the globe is currently experiencing a multidimensional crisis, China has developed a strategic proposal that would give it a chance to take the lead on the international stage. Contrarily, China is aware that it will not be able to take the lead in the world by itself and that it will require the assistance of other powerful nations, including those in Africa, Russia, and India, in order to carry out the plans for the Global Security Initiative.

However, the idea of the Global Security Initiative will eventually lead to the globe being bipolar with China and the USA as its two superpowers which may create a war-like situation in the entire world.