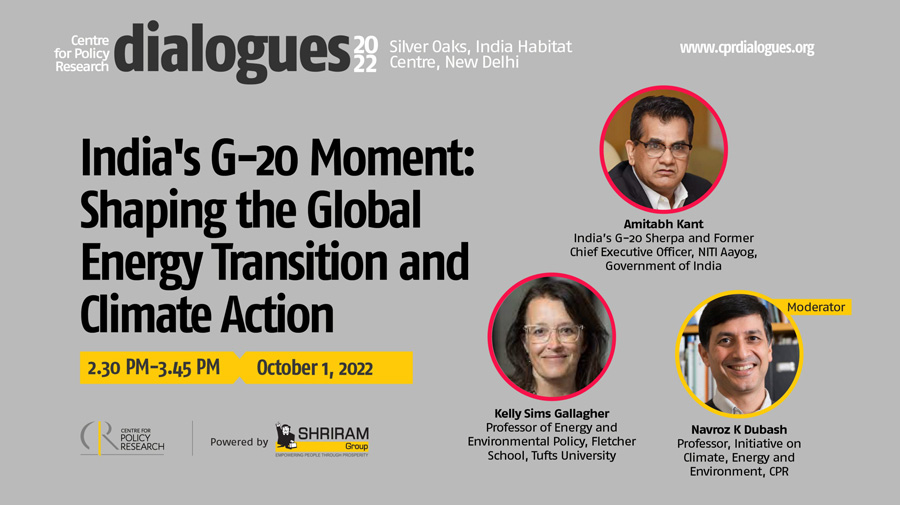 Kelly Sims Galagher, Professor of Energy and Environmental Policy, Fletcher School, Tufts University and Amitabh Kant, Former CEO, NITI Aayog and G-20 Sherpa, seemed to be poles apart when it came to who should lead the climate action. Kant was of the view that the development route taken by the West had been the major cause of the release of greenhouse gases and ultimately climate change.

Kelly, on the other hand, said that multilateral development was a no-brainer for her but she saw hope in the other players too; the developing world also had an agency.

The agenda of this session at Dialogues, a policy convention organised by the Centre for Policy Research at India Habitat Centre, Delhi, was, “India’s G-20 Moment: Shaping the Global Energy Transition and Climate Action”.

Kant accused that now that it was developed, the West wanted the developing nations to follow a green course. He blamed it for greenwashing their own paths. According to him, India as a nation is climatically and entrepreneurially blessed, and all we need now for sustainable urbanisation and development is financing. His open view was that he did “not expect any progress from the developed world”.

Kelly called G-20 the “right constellation of countries”, being the right platform to address the climate debate, even more so than the COP conferences. But she said that G-20 had largely been focused on stopping things. Whether it was fossil fuels or gender injustice, G-20 was about the negatives. Kelly opined that it should instead focus on what needed to be done, invest in the right technology, and channel climate finance in the right direction.

In the above debate, Kelly and Kant are addressing the same issue, but with different stances. I call this the Kelly-Kant Divide.

In a standard debate, we usually have these two players: Kelly and Kant. Kant usually is the person who points out the problems in the current systems and institutions and throws light on what is going wrong. He is very critical and openly accusatory, and not afraid of being so.

Kelly, pole-apart, is the person who takes cognizance of what is wrong but wants more focus on what needs to be done. She wants less stress on the negative, and more on new ideas and actions.

What is the way out? We must recognise that problem-finding and innovation do not work in isolation. The most prudent and logical way probably is that Kelly and Kant pay more attention to each other and work together in the same lab. Innovation isn’t rightly done unless there is a right assessment of the problem. And just an assessment of the problem without adapting and developing is also just part of the solution.

If Kelly and Kant come together, they “Kant” be stopped from making a real change.

Inderpal Singh
Author is a student of Political Science at St. Stephen's College, University of Delhi
Tags:
Share:
Share this...