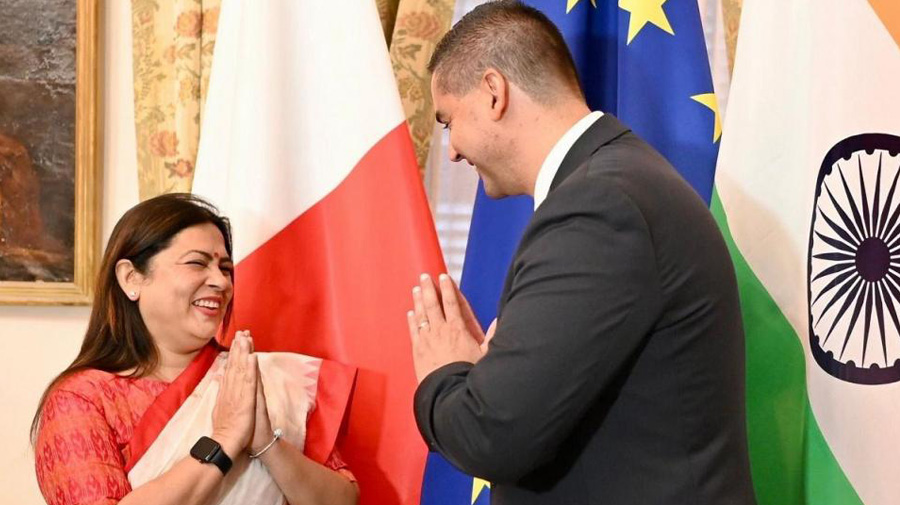 Malta and India’s political ties date back to the times before the two became independent countries. Being British colonies earlier, India and Malta have long cherished good ties before independence and as members of the Commonwealth, India and Malta share a common heritage. Malta continues to showcase a great extent of significance to the Commonwealth besides being a part of the European Union (EU) and India views Malta as one of the most trusted partners within the EU. Also, India is regarded as a fundamental strategic ally for the EU, with both cooperating on regional and international issues. Thus, both Malta and India have been looking to advance their partnership further by bolstering the traditional bonds of goodwill. In recent years, there has also been a gradual enhancement of ties between the countries. Similarly, the two countries as per the United Nations (UN) trade agreement meet at least once yearly to discuss the scientific, economic, technological, and industrial trade besides other areas such as culture.

Presently, Malta and India are focusing on specific areas such as education, tourism, film production, Information and Communication Technology (ICT), shipping, financial services, and manufacturing such as pharmaceutical and healthcare. Both countries have also signed three Memorandums of Understanding (MoU) in the field of diplomatic training, maritime cooperation and tourism cooperation. The bilateral trade between Malta and India has also drastically continued to rise where the significant exports from India include petroleum goods, whereas the principal exports from Malta include professional instruments, electrical machinery and electronic goods. Today, India is known as the “Pharmacy of the world” and being one of the primary sources of affordable generic drugs in the world, Malta should consider cooperating with India in affordable, quality healthcare facilities and importantly, also in advanced collaboration in Ayurveda and yoga.

In the diplomatic domain, both countries established diplomatic ties in 1965. Malta’s foreign policy further seeks on harnessing its geopolitical pertinence to maximize economic and political benefits. The following diplomatic ties were founded soon after the independence of Malta and India further views Malta as one of the most trusted partners within the EU. Also, India has continually been the emphasis of Malta’s foreign policy. In 2007, Malta opened a High Commission in New Delhi and has honorary consulates in Chennai, Mumbai and Kolkata. India likewise has opened a High Commission in Malta in 2018. Nevertheless, to advance diplomatic ties, the Indian foreign policy should consider giving special importance to small nations including Malta to enrich the cooperation on the strategic, economic, military and diplomatic front.

In the cultural area, Malta and India signed a cultural agreement in 1992. The High Commission has organized several cultural events such as food and film festivals, performances of Indian cultural troops and yoga day too. The Indian Council of Cultural Relations (ICCR) has further presented a statue of Mahatma Gandhi in Malta. Lately, Malta has been looking forward to strengthening the cultural partnership and cooperation between both countries. According to the Ministry of External Affairs (MEA), on the cultural front, a new start has been made in recent times with Sanskrit grammar courses being taught and an Indian film also being shot in Malta. Being in the central Mediterranean Sea, Malta is also home to thousands of Indians who trace their origins in Malta from the 1890s. The Indian diaspora is mostly involved in the food industry and textile business. The existence of the Indian diaspora in Malta is because British India had sent thousands of Indian troops to Malta in 1878. Also, the British had taken several Maltese to India.

On the economic front, India over the last decade has worked to incorporate itself into the international economy driven by its economic growth, emerging as a global actor. Lately, Malta has also focused its particular attention on contemporary emerging economies including India. The economies of Malta and India are technology-based and complementary. Both countries are going through strong shifts despite the disparity in size. India and Malta both have a vision for the future apart from having dynamic economies. Over the years, the economic ties of India with Malta have grown stronger with a yearly bilateral trade reaching nearly $350 million in 2017. The two countries to further boost political and trade cooperation started the Malta-India Mixed Commission on Economic, Industrial and Scientific Cooperation. Also, in 1995, the broad-based Double Taxation Agreement (DTA) between Malta and India came into effect. Trade relations between the two countries have been increasing and both the countries are attempting to look for opportunities in the health sector, knowledge-based industries and Indian companies additionally consider Malta as a very suitable platform to invest and operate in. Likewise, the easier facilitation of visas enables people-to-people communication and trade. Therefore, both countries should function towards promoting the effortless mobility of professionals on both sides.

India and Malta’s ties are increasing at a continuous rate and if they work jointly both can evolve at a quicker pace. The bilateral ties have continued to evolve positively over the last few years, despite the restrictions of the coronavirus pandemic. Lastly, India and Malta ought to strengthen the ties with outlying more substantive collaboration in the scientific, economic, development, human resource and technical areas such as the industrial revolution 4.0.