Il Canto degli Italiani: (The Song of the Italians) 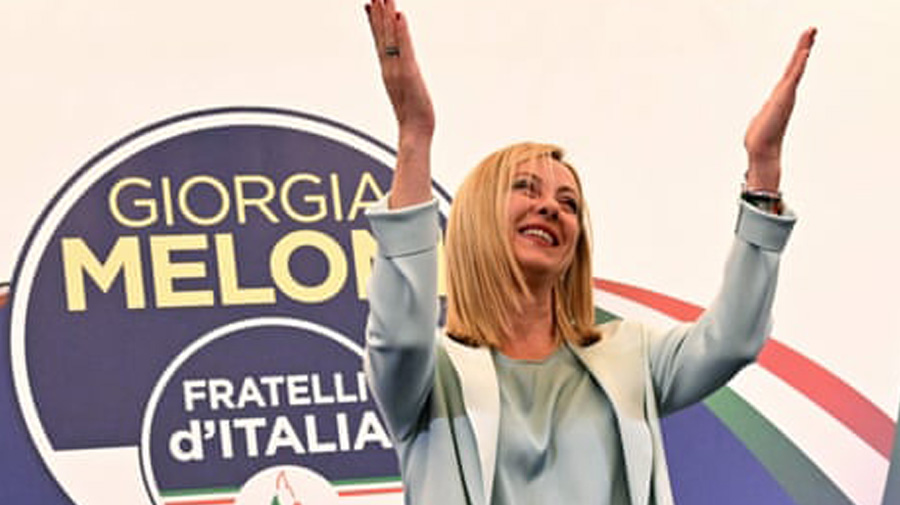 The victory of Giorgia Meloni on Sunday was seen across European circles as the beginning of the end of democracy in Italy. Many commentators were deeply concerned at the rise of someone they believe to be a ‘neo-fascist’ to the helm of one of the most important nations in the European Union. It is pertinent to note that there was no grave fascist undertones within Italian society. It was pure political opportunism and a vacancy in the opposition space that led to this victory. However, if the European Union insists on haranguing or censuring the incoming Italian government, then they would be laying the foundation for their own destruction.

On the 28th of October, 1922, 30,000 men dressed in the black garb of the Squadristi marched upon the Eternal City holding it under siege. Within the walls of this ancient metropolis, King Victor Emmanuel III, fearful of potential civil war and vastly overestimating the might of the Blackshirts, handed over power to the waiting arms of Benito Mussolini. With this transfer, the King laid the foundation for much of the carnage that was to come within 2 decades. While he did not know it yet, his act of legitimising the fascist movement as a political force capable of administration, set the seeds of a Beer Hall Putsch six hundred miles away.

The rise and fall of Benito Mussolini is coterminous with the situation of the Italian State as a whole. Once seen as one of the major powers and the Big Four of the European community, Italy has undergone a decade of instability, inflation, economic mismanagement and political deadlock. To put into perspective how volatile the political situation is, over the past 77 years, Italy has seen 70 separate governments come to power. It was to move past the era of instability and deadlock that Mario Draghi was chosen to lead a National Unity government of a big tent coalition of left and right wing-parties during the pandemic.

Initially, the overriding national necessity allowed these parties to work together under Draghi with an effective vaccine rollout, political stability and economic recovery. However, with the situation stabilised, the multitude of political parties who formed the Unity government no longer felt the necessity of coalition-based coexistence and fell back on their ideological roots. The Ukraine war further exacerbated these divisions. Even allies of the government, LEGA and the Five Star Movement were also accused of being soft on Russia.

The Five Star Movement of former Prime Minister Guisseppe Conte is an anti-establishment umbrella entity with an amalgamation of right- to left-wing ideologues. The party underwent a leadership crisis in the backdrop of the Russian invasion between its pro-Ukraine and NATO-sceptic factions. Conte, long seen as soft on Russia, was cynical towards the efforts of NATO powers in sending arms shipments to Ukraine, calling it a ‘regression’ and the beginning of an arms race. Suffice it to say, his political allies were none too content with him openly defying the prime minister’s foreign policy.

The activities of the burgeoning pro-Ukraine and pro-NATO factions culminated in a split within the Five Star Movement. The then foreign minister of the Draghi government, Luigi Di Maio left the Five Star movement and formed his own political entity, severely denting the party. The reliability of what was left of the Five Star Movement under Conte was called into question. Today they trail at 4th place after LEGA with just 15 percent of the vote and a meagre 52 seats— a far cry from their 2018 triumph of 227 seats and 32 percent of the vote.

LEGA or the Northern League, once a veritable powerhouse in conservative politics, has slowly seen its foundation erode as well. Its association with the Draghi government has left its electorate viewing it as becoming more centrist and compromising. With 53 percent of the voters choosing to close their nation off to immigrants, the electorate mood is already set. However, over the past year, Salvini, its leader and one of the main icons of the Italian conservative movement, had to cut deals, make compromises and endorse policies and leaders he once lambasted so as to ensure the continuity of the National Unity Government. Owing to such political, ideological and economic settlements with his alliance partners, LEGA, which once commanded 125 seats in 2018 and polled 34 percent in the 2019 European Parliamentary elections, now finished the night with a dismal 66 seats and 8.7 percent vote. Salvini now plays second fiddle to the maverick, Giorgia Meloni.

Next on the chopping block is Silvio Berlusconi and his centre-right Forza Italia. Emerging into the political scene 28 years ago, Silvio Berlusconi, otherwise known as Il Cavaliere, had been one of the towering figures in Italian politics for decades. Berlusconi led his party, Forza Italia to victory first in 1994, then again in 2001 and in 2008 and became Prime Minister 4 times. tIn all honesty, one could even argue that the current rise of Meloni partly happened due to the actions of Berlusconi. It was Berlusconi who normalised the mainstreaming of the far right when he brought them into his ruling coalitions on various occasions.. His decision to support Mario Draghi, along with the compromises his party made, created a vacuum in the opposition. This disillusioned many of his supporters and endangered his position. In 2013, he commanded 125 seats and around 30 percent of the vote. This fell to 104 seats and 14 percent of the vote in 2018. However, in 2022, he had garnered only 8 percent of the vote with just 45 seats, placing him as the 5th largest party. He now attempts to desperately ingratiate himself as an avuncular guide for Giorgia Meloni.

The dark horse of this election is the FdI or the Fratelli d’Italia under the leadership of Giorgia Meloni. Her victory coinciding with the centenary anniversary of Mussolini’s march, Meloni is arguably one of the most controversial right-wing politicians in recent Italian memory. Victor Orban in Hungary, Le Pen and the polemicist Eric Zemmour in France and the Law and Justice Party of Poland can clearly be seen as her ilk. A member of the neo-fascist Italian Social Movement (MSI) in her youth, Meloni has created a space for modernising the torrid and dark legacy Italy suffers from. Her reverential comments on Mussolini and supposed admiration for the fallen dictator only aggravates the concerns raised about her leadership.

As earlier stated, the decision of LEGA and Forza Italia to join with the National Unity government of Mario Draghi left the opposition space completely vacant. LEGA, which once was an ardent critic of the left, found itself working in tandem with their allies in this government. While they did leave this National Unity Government and now are in an alliance with the FdL, the damage was done. Italy found herself with the FdL being the only voice of opposition and the spokesperson for the large conservative bloc who now lay leaderless after Salvini’s and Berlusconi’s blunders.

Maloni capitalised on this opportunity by hijacking the anti-immigration rhetoric of Salvini and the tax cut promise of Berlusconi. The FdL has effectively cannibalised their vote share and now emerged as the sole pillar upon which the conservative movement of Italy rests. From 2 percent of the vote and 9 seats in 2013, to 4 percent and 32 in 2018, the FdI now commands an impressive 119 seats and 26 percent vote share.

After decades of waiting in the shadows, the descendants of Mussolini have finally emerged to once again take their place at the heart of Rome. This election only cements what one can conclude to be a decisive shift of the Italian electorate towards the Right in Italy over the last decade. While, the FdI might claim to have completely repudiated its fascist roots, the shadow of Il Duce still looms over the peninsula.

In a European Union bereft of leadership since the exit of the venerable Angela Merkel, the results of Sunday’s election are a harbinger of the chaos that is to come. Facing the greatest economic crisis since its inception, the EU is tottering. Nomura, a Japanese investment bank, had stated that the EU Economy will continue to contract over 2022, face stagflation, endure recessions and decline by around 1.7 percent in its GDP. There is also a growing energy crisis across the continent. Factories shutting down, heaters turning off, and stores shutting down are just a sample of the looming winter with the propensity to adversely affect hundreds of millions across the continent. Reports estimate around a quarter of the population of Bulgaria have no access to heating facilities. The worst part of this would be the corresponding rise in energy prices. Italy faces a 94 percent hike in energy rates and a 134 percent increase in gas prices. Adding to this, Eurostat reported that around 12 million Italians are on the brink of falling below the poverty line in the coming months.

A rudderless ship, a kaleidoscopic political landscape with a weakening economic situation has now become the hallmark of the EU. Making matters worse, the repudiation of the primacy of EU law by Poland has set alarm bells ringing in Brussels. The Hungarian support for Poland made the situation tense. Amid concerns over the “rule of law” and ‘corruption’, the  European Commission has now decided to freeze the 7 billion euro recovery package that Hungary was due. One could assume that this is a measure by the Union to punish Hungary for its open defiance.

Maloni, while raising her support for Victor Orban and his Hungarian government, has conspicuously abandoned her Euro-scepticism. This is primarily due to the fact that Italy is set to receive around 191 billion dollars as a COVID recovery package from the Union. The money is owed out of a system known as Recovery and Resilience Facility (RRF). Nations will be requested to present their individual plans for overcoming COVID, following which, once approved by the European Commission (EC), will be allocated a part of the total funds entitled. The remaining amount will be transferred in installments conditional upon the  fulfilment of milestones and targets agreed upon between the European Commission and the respective nation. Meloni wishes to amend the ‘milestones’ agreed between the EC and the Draghi government. A breakdown of talks between the 2 parties can result in an asinine decision by the EC to freeze the money owed to Italy, as is done now to Hungary. This would play right into the hands of the far right and inflame the anti-EU sentiment in a beleaguered Italian populace.

The European Union dangles on a precipice. Its principle of legal primacy is in question, its economic situation is in chaos and the political landscape is bereft of leadership. If the Union pursues a harsher policy with Italy, the very survival of the EU as a long-term project is at risk. The populace of Europe is precariously slipping further to the right. The elections in France and Germany are a testament to the same. From Poland, Hungary, Sweden, France, Germany and now Italy, the dark shadow which finally fell in 1945 is once again awakening. Ethnic identity, jus sanguinis and a return towards cultural nationalism are the new symbols of pride for the continent.

While so far there has not been any direct threats towards democracy other than in Hungary, one can never be complacent. When we see Melanchon in France or Orban in Hungary, one realises the fragility of democracy, a dream that must be cherished and protected. The freedom that Europe today enjoys, borne out of blood, must never be squandered. Millions marched to certain death, against the twin monsters of communism and fascism, to preserve the liberty that they enjoy today. Guarding it, against all forms of political extremism, left or right, is the need of the hour.

“Freedom is like air: you realise its value only when you miss it.”

Nived Koladi Mootheri
Author considers himself a pragmatist and an individual who has an avid interest in international affairs. He co-founded a blog for International Affairs called the ILSC TNNLU.
Tags:
Share:
Share this...