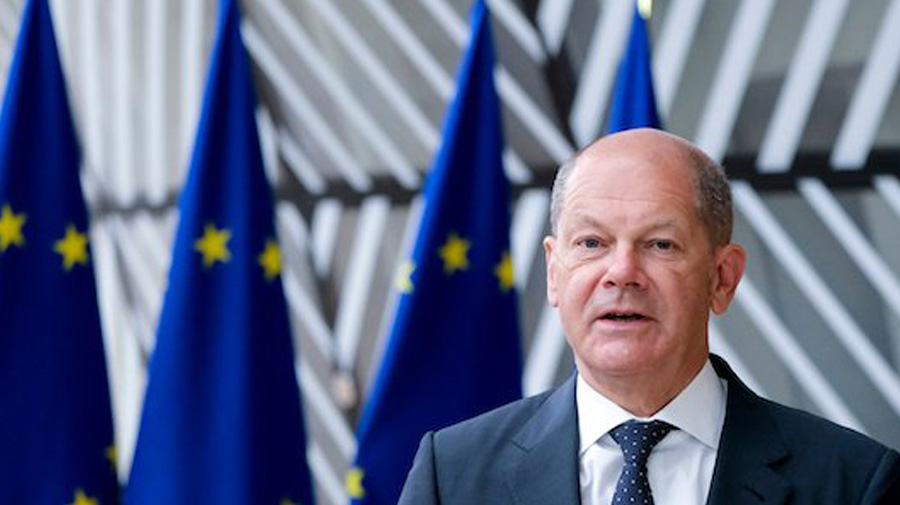 German Chancellor Olaf Scholz recently paid his first visit to the Gulf countries on 24 September in a quest to seek alternative sources of gas as tensions with Russian supplies continue to mount in Europe. A sizable business delegation accompanied him on the trip where Scholz met the Saudi crown prince, visited United Arab Emirates (UAE) and also Qatar.
With this visit, the German Chancellor has joined those western leaders who are seen as softening their attitude toward Saudi Arabia regarding the controversy around the Jamal Khashoggi murder case. The murder, at the Saudi consulate in Istanbul in 2018, led to a diplomatic crisis between Riyadh and the West, and the crown prince was largely isolated on the international stage.

Being Europe’s largest economy, Germany needs to secure new oil and gas supplies, but at the same time, it doesn’t want to be seen as soft on human rights. Therefore, the German Chancellor’s visit is being called a diplomatic balancing act. Even though human rights abuses are a major issue in the region, Germany would like to steer clear of placing undue emphasis on them while exploring energy supply options in the Gulf. Berlin is also on the lookout for sources of green hydrogen production using renewable energies that it may hope to source from the Gulf.

Saudi Arabia, although, an oil-producing state, aims to be the largest natural gas exporter by 2030 owing to its massive natural gas reserves. From that perspective, Scholz’s visit to the region is being seen as a timely endeavour indeed.

Germany and UAE have intensified their cooperation in the energy sector as Federal Economics Ministers Robert Habeck visited the Gulf in March this year. UAE is an attractive partner in energy trade both for supplying natural gas to Berlin as well as to enhance joint collaboration in hydrogen research and production. Habeck’s visit ensured that German firms would sign five memoranda of understanding with the UAE concerning hydrogen research and development.

Therefore, it is no surprise that it was in UAE that Scholz’s visit proved most fruitful and markedly added to the groundwork laid during Habeck’s visit.  The latest outcome has resulted in the German multinational energy company RWE signing a deal with Abu Dhabi National Oil Company (ADNOC) to deliver liquefied natural gas to Europe’s largest economy by the end of this year. It is to be noted that the cargo to be delivered this year by ADNOC will be 137,000 cubic metres of LNG and will be the first LNG to be supplied to the German gas market via the floating LNG import terminal at Brunsbüttel near Hamburg. A floating import terminal Brunsbüttel FSRU, was proposed in February this year in the wake of the European gas crisis and Russia’s war in Ukraine.

ADNOC further reserved an unspecified number of LNG cargoes for Germany in 2023. The deal with Abu Dhabi also includes a memorandum of understanding for a multi-year supplies of LNG. Germany’s two new planned floating LNG terminals will eventually be able to receive up to 12.5 billion cubic meters of LNG a year, equivalent to about 13% of the country’s gas consumption in 2021.

This marks an important milestone in building LNG supply infrastructure in Germany and setting up more diversified gas supplies from the globe. Berlin hopes that more deals on similar lines as with Abu Dhabi for LNG will help ease the skyrocketing prices of energy.

The European industrial giant has been desperately investing in floating LNG terminals to cut down its dependence on cheap natural gas from Russia that came directly to Europe through a network of gas pipelines. Because of cost-effectiveness, resilience in energy supply chains was not accounted for earlier and as a result, Germany did not invest in LNG terminals in time. This, however, has changed ever since gas supplies to Europe have been weaponised by Russia and abruptly suspended to ramp up pressure on European economic stature. The supplies of gas from Russia have been dwindling across the major pipelines already and Moscow closed the Nord Stream 1 pipeline “indefinitely” in early September after previously halting gas flow to Europe on several occasions.

It is also to be noted that while countries like France made use of their coastlines, kept the energy imports diversified and set up enough LNG terminals, landlocked countries like Germany had little option but to resort to cheap pipeline gas. The German government is currently determining the best locations for floating terminals. Wilhelmshaven, Brunsbüttel, and Rostock are among the ports being considered in the region. Scholz’s government is already ramping up efforts to build LNG terminals. In a few months alone, his government is working to deliver to the country its fifth floating LNG terminal by the end of this year.

A shocking, unprecedented turn in gas pipeline politics came two days after Scholz embarked on his trip to the Gulf. On 26 September, mysterious ruptures were spotted in Nord Stream 1 and 2 pipelines in the Baltic Sea with no credible explanation of what led to these ruptures. While sabotage appears to be the most credible explanation so far, the four massive ruptures and a tremendous amount of natural gas spillage into the Baltic Sea ever since has closed the prospects of gas flowing through the Nord Streams to Europe again.

The accident (or sabotage) has revealed the vulnerability of the critical infrastructure in Europe. The European Union is rushing to ramp up its energy infrastructure security and countries like Norway have already started deploying military capabilities to protect their oil and gas installations.

In such volatile circumstances with all time high inflation in the Eurozone, it is even more cardinal for an economic powerhouse like Germany to seek and cement a diversified basket of energy imports along with timely investments in renewable energy as well. The current reach out to the Gulf States is an attempt for the same.