Inter-Religious Dialogues are Critical to the Post-Pandemic Recovery 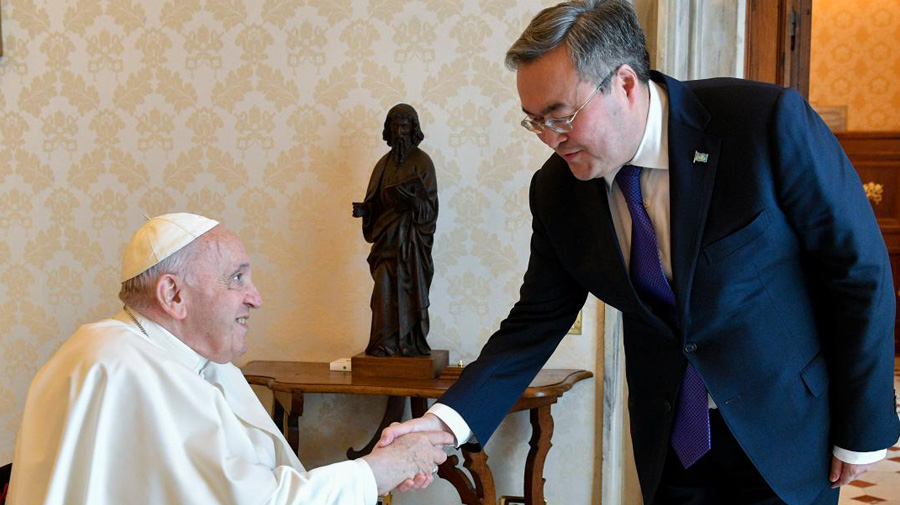 Kazakhstan, a multi-ethnic and multi-religious state, has a diverse population of 19.2 million people with over 3,200 places of worship and roughly 4,000 religious organisations. The country also has a diverse society that includes Kazakh, Russian, Uzbek, Ukrainian, Uyghur, Tatar, German, and others. Despite the fact that Islam is the most widely practiced religion (approximately 70%), people of all faiths live in peace, protected by Kazakhstan’s Constitution, which guarantees the right and freedom to practice any religion or belief. President Kassym-Jomart Tokayev noted at the 74th UN General Assembly in 2019 that Kazakhstan has evolved into a prominent center for interreligious dialogue over the years. Against this context, the Republic of Kazakhstan hosted the Seventh Congress of the Leaders of the World and Traditional Religions on 14-15 September 2022

Former Kazakh President Nursultan Nazarbayev spearheaded this programme to stimulate dialogue and discussion between other religions, ethnicities, and civilizations. The VII Congress was held at a time when the world is still recovering from the COVID-19 pandemic and dealing with the aftermath of the Ukrainian conflict. The theme of the VII congress was “The Role of World Religious Leaders in Spiritual and Social Development in the Post-Pandemic Period”. Since religious leaders have the ability to influence political outcomes, their importance in politics cannot be understated. But for it to happen, there has to be harmony amongst the many religions. In this way, Congress has provided the leaders of the many faiths with a crucial platform for dialogue and consensus on problems and concerns affecting humanity.

One of the distinctive features of this Congress is the high level of participation. In comparison to the 17 delegations from the 23 countries that attended the first Congress, more than 100 delegates from 50 different countries attended the VII Congress. The most significant speaker of Congress was Pope Francis, the Head of the Catholic Church. The congress also included representation from various religions such as Islam, Christianity, Bahai, Hinduism, Jainism, Judaism, Zoroastrianism, Taoism, Shintoism, Buddhism, and other religions. The opening and closing ceremonies of the Congress were attended by Kazakh President Kassym-Jomart Tokayev, who also delivered his remarks.

Hinduism needs equal participation in the Congress of World Leaders and Traditional Religions since it is one of the major religions in the world. Even if the Hindu faith was represented in the VII Congress, India still needs to participate at a high level. In Hinduism, the unity and peace of all religions are emphasised. Swami Vivekananda introduced his speech at the World’s Parliament of Religions in Chicago in 1893 with the phrase “Sisters and Brothers of America,” much as Pope Francis did at the VII Congress by addressing the audience as “brothers and sisters.” This illustrates how Hinduism has consistently made an effort to promote religious tolerance. Buddhism also had minimal representation in Congress. As a result, their high-level participation can offer significance to the VIII Congress of World and Traditional Religions, which will be held in Astana, Kazakhstan, in 2025.

The relevance of common values in human spiritual and social development was emphasised during the VII Congress. The religious leaders stressed the need of preventing and resolving conflicts based on racial, religious, and cultural differences as well as combating intolerance and hate speech. The significance of education and spirituality for one’s own and interreligious growth, as well as the role and rights of women in society, were also emphasised. In his opening remarks, Kazakh President Tokayev emphasised the need for human solidarity in order to establish a new system of global security. He also emphasised that one of the key goals of the Congress of Leaders of World and Traditional Religions is to advance humanism as a philosophy and to uphold eternal spiritual truths.

A shared and humanitarian strategy is required to address the global issues of the post-pandemic world, such as climate change, poverty and famine, organised crime, terrorism, and narcotics. There is an increase in the number of migrants and refugees who require humanitarian help and protection as a result of these crises and criticised the emergence of hotspots of interstate and international conflict around the world. The leaders also agreed that in order to address the challenges facing the modern world, it is crucial for spiritual and political leaders to work together.

President Tokayev declared that “power politics” and “hate speech,” both of which lead to the mutual alienation of nations, the breakdown of governments, and the worsening of international relations, had been jointly rejected by all religious leaders. It is more important than ever to make use of religion’s power to promote peace and to organise spiritual leaders’ efforts in the interest of long-term stability. According to the president of Kazakhstan, these fundamental ideas must be reflected not only in the spiritual world but also in local socioeconomic growth and international politics. He was referring to the development of a tension hotspot that impacts not only the participating countries but also those who are not directly involved. He also takes into account the necessity of interfaith cooperation to promote moral values that are eroding as a result of digitalization. Though he also underlined the usefulness of digital domains.

Kazakhstan has developed into a focal point for interreligious, intercultural, and inter-civilizational discourse and interaction as a multi-religious and multiethnic state. Through the Congress of the Leaders of World and Traditional Religions, Astana has significantly contributed to the development of a crucial forum for conflict prevention. It is essential that the Congress of World and Traditional Religions take more decisive action to improve interreligious, intercultural, and inter-civilizational cooperation in order to deter violence and foster peace. Interaction and conversation between diverse cultural, religious, and civilizational groups may eventually help resolve international disputes, if not immediately and Kazakhstan has a bigger role to play in this regard.