At the UNGA Session, India is the Buzz Word 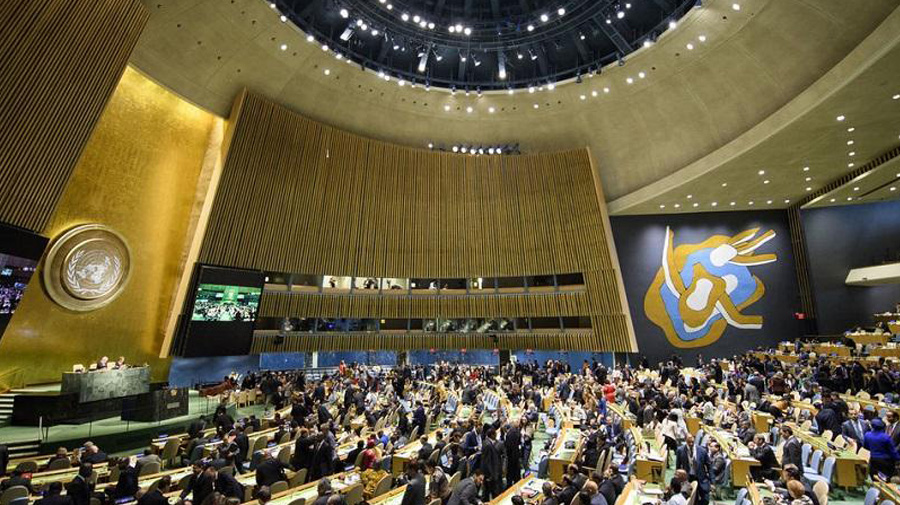 PM Modi during his bilateral meeting with President Putin at the SCO Summit on 15thSeptember 2022, while reiterating a close and strong relationship, stated “today’s era is not of war”. The statement caught the attention of news headlines and overshadowed many more things that happened at the Summit. However, when French President Emmanuel Macron and the US National Security Adviser drew the attention of the world to PM Modi’s statement, the entire global community has taken note of it.  French President during his speech at the ongoing session of the United Nations General Assembly said, “Narendra Modi, the Prime Minister of India was right when he said the time is not for war. It is not for revenge against the West, or for opposing the West against the East”. On the same day, US National Security Adviser Jake Sullivan said in a news conference, “I think what Prime Minister Modi said – a statement of principle on behalf of what he believes is right and just – was very much welcomed by the United States.”

This is however not the first time that India’s position on the world stage has caught attention. In the past eight years, the current government has specifically focused on getting India to its rightful place on the globe and its efforts are slowly bearing fruits. PM Modi has been rated as the most popular leader more than once in global surveys. Most recently, India overtook the UK to emerge as the fifth largest economy in the world. India’s digital economy, especially the UPI is the topic of appreciation in global economic circles and is being adopted in many countries. India’s fight against Covid-19 including developing its own vaccine and administering almost 100 Crore vaccines by December 2021, too was applauded globally.

Earlier too, a number of initiatives announced by India have been adopted globally. In his speech at the UN General assembly in Sept 2014, PM Modihighlighted the importance of Yoga stating, “Yoga embodies unity of mind and body; thought and action; restraint and fulfillment; harmony between man and nature; a holistic approach to health and wellbeing” and called for adopting an ‘International Yoga Day”. The UN responded promptly and in its resolution on 11th December 2014, declared the adoption of 21st June each year as the International Yoga Day. Another initiative which India shepherded was the establishment of the International Solar Alliance (ISA). Speaking at the launch of ISA on November 30, 2015 in Paris, on the side-lines of the 21st Conference of Parties (CoP-21) to the United Nations Framework Convention on Climate Change, PM Modi highlighted the uniqueness of the Sun as a source of endless energy and said “Since ancient times, different civilizations have given a special place to Sun. In the Indian tradition, Sun is the source of all forms of energy. As Rig Veda says, Sun God is the Soul of all beings, moving and non-moving. Today, when the energy sources and excesses of our industrial age have put our planet in peril, the world must turn to Sun to power our future”. Once again, the idea was welcomed globally and in a short span of time, over a hundredcountries have signed and ratified the ISA charter with the US being the most recent to ratify it on 17th September 2022, having joined it earlier in November 2021.

The ongoing Russia-Ukraine war too has highlighted India’s rising global prominence. The war in Ukraine in the Indian context is not only about its stand on the conflict but also the overall discourse of its foreign policy. Despite strong and persistent pressures from the West to sanction and denounce Russia, India held its ground and refused to bow to external pressures. As the war progressed, the stature of New Delhi as the ‘go-to capital’ has grown. The number and profile of foreign dignitaries lining up to visit New Delhi has grown by the day. India has been frequently requested by nations to use the good rapport that PM Modi enjoys with President Putin to end the war in Ukraine. Major in-visits to Delhi and interactions (online) include the PM of Japan, Nepal,Mauritius, and Bangladesh interaction (virtually) with the PM of Australia and Israel, visits of foreign ministers of China, Russia, UK, Austria, Greece and Mexico, Oman’s Defence Minister, US Deputy National Security Advisor, Foreign and Security Policy Advisor of Germany and EU Special Envoy on Indo-Pacific.

In all such interactions and other meetings/occasions, India has made its stand transparent and exposed the hypocrisy of many others. While addressing a joint news conference after the conclusion of the 2+2 ministerial in Washington in April, Dr S Jaishankar told a reporter when asked about India’s oil purchase from Russia “We do buy some energy, which is necessary for our energy security. But I suspect looking at the figures, probably our total purchases for the month would be less than what Europe does in an afternoon.” Speaking in the Lok Sabha earlier on 07th April, he stated “If India has chosen a side, it is the side of peace”, which perfectly sums up the outlook of India’s foreign policy direction.WhenPM Modi makes a clarion call for India to emerge as ‘Vishwa Guru” or a Global teacher/leader in all fields, it drives India towards excellence and achievement of high goals, but it also makes the world sit up and ‘take noteof what India has to say’. PM Modi’s speech at the UN General Assembly in 2019 where he stated, “We are citizens of a country that has given the message of peace, Buddha to the world and not wars”, represented the deep philosophy of India’s outlook towards other countries in the world. India may not yet be a permanent member of the UN Security Council, but the weight it carries is no less.