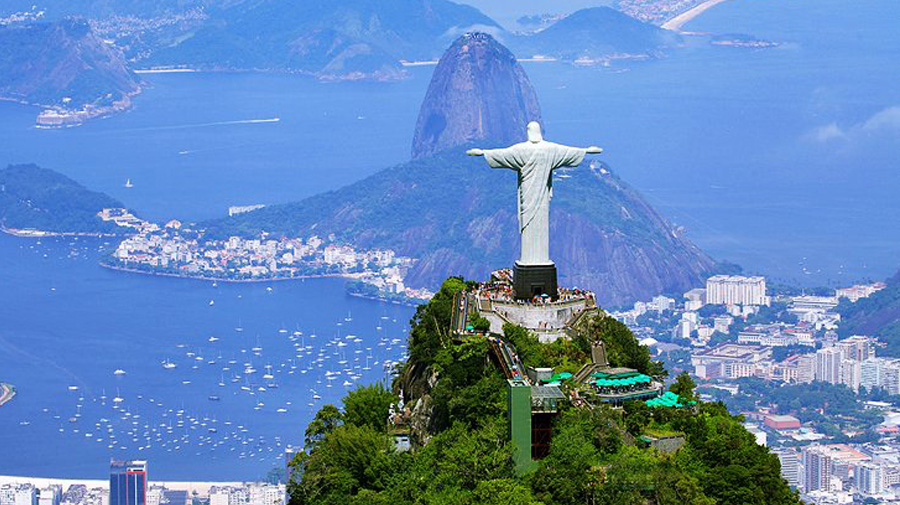 Brazil, a country with almost two and half times of the landmass but with a population of less than that of UP, has been the centre of tourist attraction in the modern world. With a coastline of around 7,400 km and spanned in two time zone Brazil can cater to the touristic needs of all types of tourists from historical and religious to ecological and nature tourism. In 2019, more than 65 lakh tourists landed on the Brazilian soil. This number dwindled in next two years due to the Covid pandemic but is again picking up in the current year.

The first and the foremost attraction for a tourist is Rio de Janeiro, the erstwhile capital of Brazil. Situated on the south eastern coast of Brazil and in the state of the same name, the city of Rio de Janeiro is world famous for its fun, frolic and vivacious nature which engulfs any tourist. The Copacabana and Ipanema beaches with pristine white sand are always full of sea lovers throughout the day. However, the biggest attraction of the statue of Christ, the Redeemer and the Sugar Loaf are the must for any tourist. Located on top of the 709 metres high mountain Corcovado, this 30-meter high stone statue of the Christ with his arms outstretched to embrace the sufferers, also houses a church where marriages are solemnized. The journey to the statue is covered by a funicular train which chugs its way up from the bottom of the mountain through the Tujica National Park, thus giving the tourists a glimpse of Rio’s extensive fauna and flora. Another place worth visit is Pao de Sucor or the Sugar Loaf, a nearby 394 metres high hilltop in shape of a bread loaf and connected through the cable car. It gives the tourists a 360 degree’ view of the town of Rio.

The best annual tourist attraction, however, is the Rio Carnival in February. The typical Rio carnival parade is filled with revelers, floats, and adornments from more than 200 samba schools  located in Rio which vie for attraction in a parade held on Sambadromo, a road stretch of 700 meters. These schools prepare for the event throughout the year and some schools spend as much as one million US Dollars for this annual parade. This spectacular show sometimes consists of 3-4,000 participants per school. Tourists from all over the world rush to attend this ‘once in a life time opportunity’. Rio is a vibrant city which never sleeps like Mumbai. The nights in Rio are always young with the bars, cafes and dance clubs functioning round the clock. Besides Rio, the carnivals are also organised in Sao Paulo and Salvador but not at as grand level as in Rio.  A burning proof of turning a disadvantage into an opportunity is “slum tour” organised by tour operators in collaboration with the notorious slumlords where otherwise a civilian (or often a police force) would dread to enter due to the organised crimes prevalent in these favellas (slums).

The biggest attractions in Brazil for the nature-lovers are the Iguasu falls and the Amazon Rain Forests. Iguasu falls is formed by the river of the same name at the tri-junction of Brazil, Argentina and Uruguay.  It is higher than Niagara and wider than Victoria falls as its longest drop is 82 meters and flow of water is 1753 m3 per second. In fact, the Iguasu river falls in 247 streams here and the boats can take the tourists right under the biggest drop.

In the north western province of Amazonas of Brazil, lies the Amazon Rain Forest, the largest bio-diverse tropical forest in the world. More than 55% of this huge forest of around 55 lakh km2 is in the Brazilian Amazonas. The Amazon represents over half of the planet‘s remaining rainforests, and comprises the largest and most biodiverse tract of tropical rainforest in the world, with an estimated 390 billion individual trees divided into 16,000 species. More than 2000 species of birds and mammals have been found there so far. More than 3 crore people of 350 different ethnic groups live in the Amazon Forest but a number of them are on the verge of extinction due to the encroachment of the so called “Civilised World”. Near Manaus is the Jau National Park for the tourists interested in flora and fauna. About 20 km from Manaus, is a place called “Encontro de Aguas” (meeting point of the waters) where two rivers Rio Negro (the black river) and Rio Solinois (the silty river) converge to form River Amazon the second largest river in the world after Nil River. The most astounding fact is that from there, the two rivers flow side by side with their water distinct for about 8 kms before their water becomes indistinguishable. Boat safaris are organised there and besides many exotic plants and animals, one can spot anacondas if one is lucky.

Brasilia, the capital of Brazil, can prove to be very interesting for the tourists interested in architecture and art. Like Chandigarh, Brasilia is also a planned city build in 1960 by the famous Brazilian Architect Oscar Niemeyer and landscaper Robert Burle Marx. The city is built like an aircraft with the main body housing the government and the wings and tutelage form residences, The parliament building, the ministries and above all, the most beautiful cathedral are the classic example of modern architecture.

Sao Paulo: The largest city in south America and second largest in Americas after New York, is principally the commercial capital of Brazil and accounts for more than one third of the country’s GDP. But it too has its share of architecture, music and arts. This city, boasting to have the biggest number of skyscrapers in the world after New York as well as largest fleet of private helicopters after New York, has many museums, art galleries, graffiti paintings and yes- soccer stadia as soccer is the national game of Brazil. The Pecambu stadium in Sao Paulo houses a museum of football with more that 10,000 interactive pictures, 3D presentations and films to keep a football buff engaged throughout the day. Unlike China towns found in many countries, Sao Paulo has a Japanese town where one can get almost everything from Japan. A unique feature of Sao Paulo is the numbering system of its houses. Buildings/independent houses in Sao Paulo are not numbered in the simple numerical order like anywhere else. The number of any house or building denotes its exact distance in metres from the beginning of the particular street the property is on. So, if the first house (no.1) on the left side of the street has a boundary of 20 meters, the next house will be numbered 21 and not 2 or 3! And the third house will be numbered 32 if the boundary of the second house is 11 metres. Though it might initially seem a bit confusing, scientifically it is correct as it tells the exact distance one has to travel from the beginning of the street to reach the destination.

Besides the above, there are many attractive places like old capitals, churches, cathedrals, art galleries etc to be seen in Brazil depending on time available.

Rio de Janeiro, Sao Paulo and Brasilia are well connected with all American and European nations and with non- stop flights to the Middle East.

One last word of caution! As Rio de Janeiro and Sao Paulo are known for armed robberies on roads, it is always better not to be conspicuous by appearance or flaunt opulence. In its advisory to visiting Indians, the Indian Consulate in Sao Paulo used to advise to keep small money always in the upper pocket of your vest/jacket for the robbers at road intersections where hold ups were normal due to traffic jams. But as the saying goes- it is safe everywhere until it happens to you.

Amb. J.K. Tripathi
Author is a retired officer of the Indian Foreign Service with 33 years of experience in Diplomacy. He was also the Consul General of India in Sao Paulo, Brazil.
Tags:
Share:
Share this...