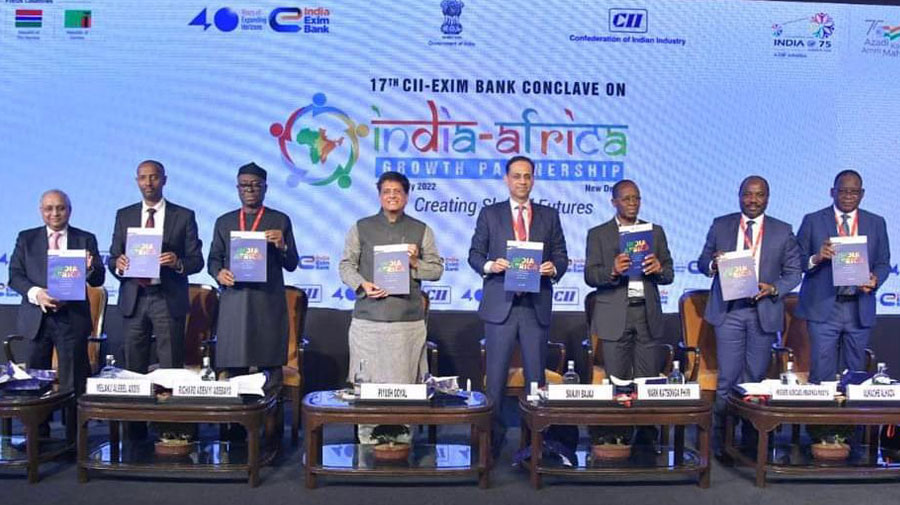 The recent turbulence – whether it is the Covid pandemic or the knock-on effects of the Ukraine conflict hold lessons for everyone. All nations, big and small, have become more aware of their vulnerabilities and external exposures. After the Covid pandemic, the 17th edition of the CII-EXIM Bank Conclave on India-Africa Growth Partnerships

was the first such high-level investment meet in Delhi.

Ministers from several African nations were in the capital for this key two-day investment meet. The Conclave was inaugurated by the Indian Trade Minister Piyush Goyal.

The conclave was represented by forty high-level ministers from 17 countries, including Cameroon, Burkina Faso, Eswatini, Republic of the Congo, Ethiopia, Gabon, Equatorial Guinea, Ghana, Niger, Malawi, Mauritius, Sudan, Namibia, Nigeria and Sierra Leone. Over the years, the Conclave has emerged as one of the largest congregations of senior ministers, policymakers and business leaders from Africa and India, cutting across sectors, and played a pivotal role in encouraging Indian companies to establish and grow their footprint in Africa. The conclave, besides helping take India’s private sector into African nations, “brings together African ministers with their experienced Indian counterparts in informal meetings instead of ministerial meetings.

This year’s conclave focused on infrastructure development and trade finance, education and training, agriculture and food processing, consultancy services, and healthcare in addition to other areas where Indian companies have steadily increased their presence over the years in Africa.

The trade between India and African countries has been pretty balanced with exports of trade and services of about $40 billion and imports of $49 billion, Commerce and Industry Minister Mr. Piyush Goyal said while speaking at the inaugural session.

Goyal identified four major focus areas for the India-Africa partnership: solar power, military exchanges in the context of the security of the Indian Ocean, physical and digital infrastructure, health care, pharma and vaccines, and start-up ecosystem.

However, Minister of External Affairs, Dr. Jaishankar highlighted the digital shift during the pandemic. He said, “in terms of responses, the actual potential of digital delivery was demonstrated during the pandemic in different domains as well. It is therefore worth considering how India and Africa can make the triad of health, digital and green growth the focus of collaboration. This is as much a business opportunity as it is a public policy.”

During his address at the Special Plenary of the 17th CII-EXIM Bank Conclave on the India-Africa Growth Partnership, MEA, Dr. Jaishankar said, “this edition would contribute to generating a buzz in the business communities of India and Africa for our mutual benefit.”

Trade between the African subcontinent and India increased from $7.2 billion in 2001 to $59.9 billion in 2017, making India the continent’s fourth-largest national trading partner, according to Exim Bank and the African Export-Import Bank (Afriexim Bank).

Trade with India accounted for more than 6.4 percent of total African trade in 2017. Data from the Ministry of Commerce and Industry show bilateral trade between India and the 48 countries of sub-Saharan Africa was valued at $46.82 billion in 2020-21, down from $55.70 billion in 2019-20. India has a negative trade balance with sub-Saharan Africa, the Ministry figures show.

Earlier on May 25, on the occasion of Africa Day, a statement was issued by the Ministry of External Affairs (MEA), that mentioned how African nations have benefited from India’s Duty Free Tariff Preference (DFTP) scheme which provides duty-free access to 98.2 percent of India’s total tariff lines. “Lines of Credit (LoCs) worth $12.26 billion have so far been extended to African countries, making them the second-largest recipient of India’s concessional loans”, the MEA said.

Besides all economic and trade relationships, India has also always stood by its friends in times of need by extending support in the form of Humanitarian Assistance and Disaster Relief (HADR), often as a first responder.

Historically, India and Africa have longstanding, historic trade and economic linkages which go back into the recesses of time. Whether it is commerce, culture or mobility, there are truly historical linkages that give Indo-Africa contemporary partnership a strong sense of comfort.

However, over the years, Indian enterprises have also invested in energy, healthcare, and agriculture sectors, as well as the business of diamond cutting and polishing, in Namibia. Analysts expect these sectors to grow over the next few years.

According to the study, there is a huge trade complementarity between India and Africa. India’s total trade with Africa stood at $82.5 billion in 2021, recording the highest level witnessed by both regions. Bridging gaps in trade finance could unlock the latent export potential of India and Africa and could increase the share in global export participation of both regions.

This is the time when India needs to be dynamic in its engagements in Africa and address the changing needs of the continent while emphasising the huge opportunity the African Continental Free Trade Area agreement presents for India.

Dr. M Shahid Siddiqui
Author is a promising media and development professional with great skills and knowledge in the digital media and social development sector. He is also a campaigner for Human Rights, added to his amazing work as a journalist.
Tags:
Share:
Share this...