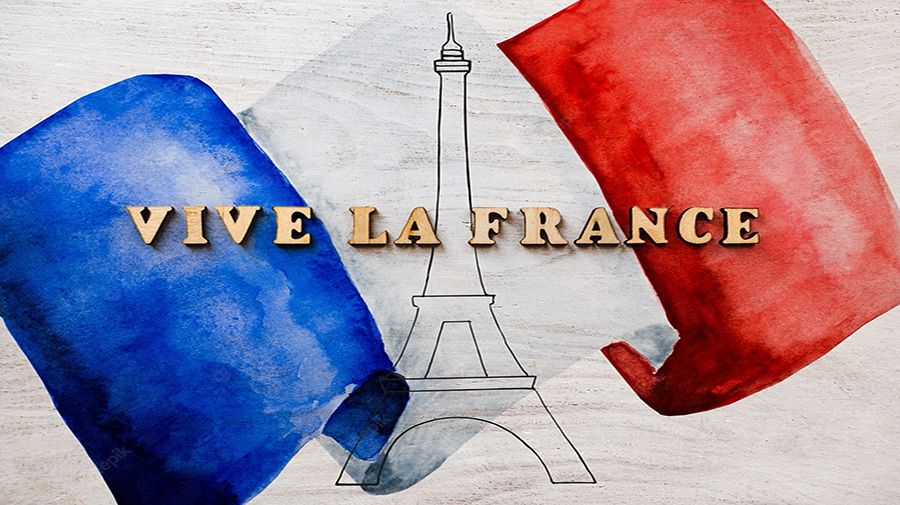 France, the nation of Louis the 14th, Napoleon Bonaparte, Charles De Gaulle and now Emmanuel Macron. The land of the Bourbons and the Bonapartes had seen a plethora of republics rise and fall over the centuries. Their collapse was always at the hands of either a disenchanted populace or foreign powers such as the Seventh Coalition, the North German Confederation and Nazi Germany. Despite its turbulent constitutional history, the Republics of France was always known for its moderation in mainstream politics. The nation had long maintained a distinct brand of European socialism and conservatism strictly based on economic concerns alone, leaving aside any ideologies connected with race, ethnicity and religion. The perfect example of this would be the 2002 French Presidential Election between the then President Jacques Chirac and far-right leader, Jean-Marie Le Pen when almost all the political players of the day, regardless of ideology united behind Chirac in order to defeat the far-right demagogue. However, the France of 2002 has just been buried in the wake of the 2022 Legislative Elections.

The recent French legislative elections have gone unnoticed by most of the mainstream media houses other than a few statements regarding its results. Emmanuel Macron’s La République En Marche along with their allies are at 245 seats, 44 short of the majority mark. Opinion polls initially placed the incumbent alliance in a comfortable win, but the months following the presidential election saw this trend shift the other way. Despite all efforts, the president and the prime minister led their party into this election with only a glimmer of hope that their coalition would prevail. For the 4th time in modern French history and for the first time since the 1990s, the French National Assembly will once again see the Cohabitation Era, essentially a period where no coalition has a majority.

With around 245 seats, the post of prime minister is still secure with En Marche, however, Macron will now be hard-pressed in delivering the reforms he envisioned. The key issue will be NUPES. The NUPES is an umbrella alliance of all liberal, left-leaning and socialist parties. They have won 141 seats in the French National Assembly with around 22 percent of the vote. NUPES includes the La France Insoumise of Jean-Luc Mélenchon, the once-mighty Socialist Party, the French Communist Party and the Greens. Adding the 22 other left-leaning victors of the election, the total coalition left of centre has a total of 163 members who are vehemently anti-Macron.

In the aftermath of the presidential election, one thing became clear. The ground of centre-left politics is on the decline. The Socialist Party, founded by the former French president, François Mitterrand had campaigned a few months ago against Macron under the leadership of Anne Hidalgo. However, to the shock of the party faithful, this once juggernaut received just 1 percentage of the vote and was reduced to the 10th place in the election. Facing irrelevance, the Socialist Party are now forced to play second fiddle to Melenchon and his far-left party, La France Insoumise.  The Greens are not so different. They usually maintained the 5th or 6th position in the presidential race since their inception in 2010. However, as with the Socialists, their vote share had been ever-shrinking, forcing them to tie their fate to Melenchon.

On the other side is Les Republicans, the party of Nicholas Sarkozy, founded upon the principles of General Charles De Gaulle. It is one among the long line of moderate centre-right parties that had usually dominated the French conservative vote base. Les Republicans had contested the presidential election a few months ago under the leadership of Valerie Pecresse, a leader dubbed the French Merkel and Thatcher. However, the party won just 4 percent of the vote and came in just above the Green Party. In this election, they lost more than half its seats from 2017 winning only 61, with its votes collapsing to just 10 percent. Most opinion polls and political pundits had initially pegged the party as edging over and winning more than the National Rally with the results being the exact opposite. This is an astounding fall from grace for a party that had 20 percent of the vote in 2017 and whose predecessors once held the presidency.

The dark horse of this election is the National Rally under Marine Le Pen who has succeeded in winning 15 percent of the vote. Their electoral success is a political earthquake in the making. The party is led by Jordan Bardella, their acting president as the Prime Ministerial candidate. They went from a meagre 0.35 percentage votes and 2 seats in 2012 to 1.39 percent vote and 8 seats in 2017 and finally to around 15 percent of the vote in 2022 and 89 seats in the French National Assembly. Le Pen is undoubtedly on the rise. Her brand of politics seems to have finally begun resonating with the beleaguered populace who now perceive the moderate parties as too servile and supine to bring about any decent change.

This election should not be written off as another French legislative election with a left-right tussle for dominance. Nor should this election be disregarded as merely a setback for Emmanuel Macron which would ‘force him to compromise’. This election is a sign of the events soon to unfold across Europe in the coming decade. Melenchon broke from the Socialists to form the Left Party which he left in 2016 to found the La France Insoumise. While socialism and socialist parties were always popular in France, Melenchon is not your average moderate socialist leader. Many pollsters categorically place him as the face of the far-left movement in France. He was also the candidate of the Left Front in the 2012 presidential election. By all accounts, he is a radical far-left firebrand who has sworn to oppose Macron on all his policies, backed the yellow-vest protests against economic inequality, supported the lowering of the retirement age to 60 and the reimposition of wealth tax on the rich and major companies. Malenchon has even made his position clear that he is ready to break with the European Union if his policies are blocked by them.

Marine Le Pen, on the other hand, is someone diametrically opposed to Melenchon yet similar in character. The daughter of Jean-Marie Le Pen, Marine Le Pen also supported the yellow-vest protests, supported the lowering of the retirement age to 60 and is famous for her position against the EU-France relationship. She also supports small businesses, tax cuts and privatisation. Long seen as an opponent of the immigration policies of France, Le Pen had been vocal in opposing the influx of Muslim immigrants in the aftermath of the Syrian Civil War. She had only hardened her position following further immigration from Sub-Saharan Africa.

While she did not categorically call for any expulsion of immigrants in her 2022 presidential election, her policies are always framed in such a way that they give preference to the French people in matters of social housing, welfare and jobs while cutting benefits to immigrants. Aiding her is the far-right polemicist Eric Zemmour who believes in the controversial ‘Replacement theory’ that Muslims are seeking to replace the indigenous french people and make the nation an Islamic state. Headscarf bans, limiting immigration, and constitutional reforms to eradicate radical Islam are but some of the policies of the far-right resonating with the French electorate.

What we are seeing is the death of traditional conservatism and socialism that had dominated the french republic for over 70 years. Despite jumping on the Melenchon bandwagon, the socialists still manage to be the only party in the alliance to actually lose seats when compared to the last election. Despite uniting behind Melenchon, the entire left-wing umbrella of the socialists, communists, greens and other similar parties could only garner around 22 percent of the vote. Contrast that with the 2012 election where the combined vote share of these parties came to a whopping 57.7 percent and 331 seats divided between them. With Macron shifting his coalition further to the right, the era of Socialist France seems at an end.

The space for moderate parties is now shrinking. No more will the socialists, greens and conservatives hold such sway over the electorate. What we are seeing is in fact a seismic shift of the French voters to either side of the political spectrum. Two sides of a coin, incompatible with the other. Union workers, blue and white-collar workers who once formed the foundation of centre-left coalitions are now leaving their socialist parties in droves. The death of traditionally moderate parties is part of a larger trend across Europe.  In their desperation, moderates such as the Socialist Party and the Greens have aligned themselves with the Trotskyist Melenchon only to further legitimise his credentials as a mainstream politician. Indeed, Malenchon’s victory might even embolden the radical left and we could see a resurgence of Marxist Leninism. The woeful underestimation of the far-left ideology will cost the Socialists and the Greens dear.

The Syriza alliance, the opposition in Greece, is a classic example of a far-left alternative to traditional parties. Their antipathy toward capitalism along with their Marxist-Leninist and Stalinist leanings is not something that must be understated or whitewashed. They present an inherent danger to the capitalist and globalised vision of the modern democratic World Order. This is also coinciding with the rise of far-right, nationalistic and to an extent even ethnocentric political entities on the continent. We can see this in the rise of the Law and Justice party in Poland, Fidesz in Hungary, the Revival party in Bulgaria, the Party for Freedom in the Netherlands and the famous Alternative for Deutschland in Germany. The entry of the 89 National Rally members into the French National Assembly is eerily coterminous with the historic entrance of the 83 AfD members into the German Bundestag in 2021.

Furthermore, as the voting electorate shifts further to either side, a third group emerges, the abstained vote. More and more people are abstaining from voting in elections. Even now in the 2022 legislative elections, more than half the electorate abstained with only 46 percent turnout recorded. While low turnouts are not in itself a matter of concern in France but coupled with the seismic shifts to either end of the spectrum, they will only yield better results for Malenchon and Le Pen. This is because their die-hard supporters are always expected to vote for their leaders and parties irrespective of electoral success. This leaves little doubt that the future of France now swings on a pendulum.

The last time any nation in Europe faced such a vertical partition of society into rival socio-political institutional orders was in the aftermath of the Great Depression. In the tragedy that followed, who could have guessed that such polarisation would lead to 12 years of darkness. Few would guess, fewer would listen and fewer still would act on such terrible premonitions.

This is not just the demise of socialism in France but the moderate space in Europe as a whole. France has begun its precipitous fall into violence, populism and possible left-wing extremism. Undoubtedly, in such a scenario, faced with the possibility of communism and Stalinist violence, the National Rally under Le Pen would very well be the better of two evils. The battle for the French National Assembly has ended, and the War for France has only just begun.

Nived Koladi Mootheri
Author considers himself a pragmatist and an individual who has an avid interest in international affairs. He co-founded a blog for International Affairs called the ILSC TNNLU.
Tags:
Share:
Share this...