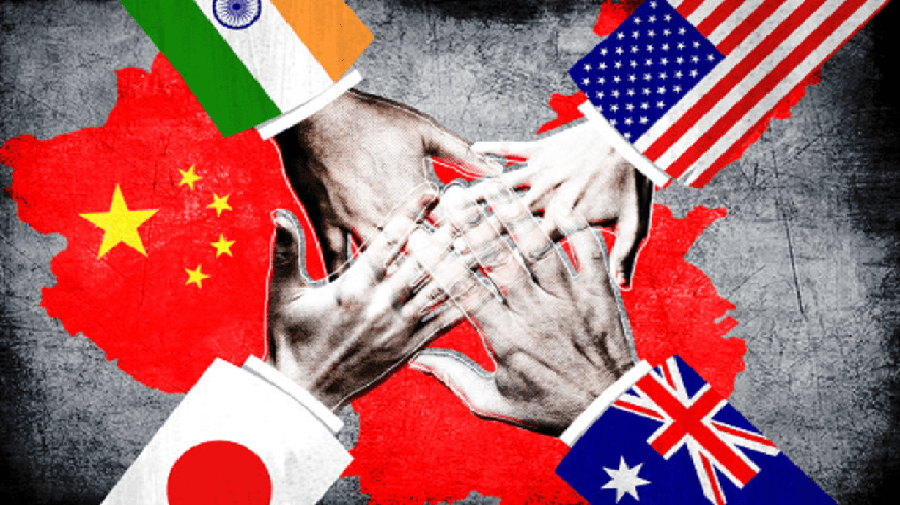 The Indo-Pacific region includes the Indian Ocean, Pacific Ocean and the countries surrounded by both. The economic, political and social development in the region has led to an increase in its prominence and hence it witnessed a geopolitical shift from the North-Atlantic region to the Indo-Pacific region. Though India has a historical relationship with the Indo-Pacific region, recently India has grown its interest in this region.  Since independence India tried to maintain a good relationship with South-East Asian nations. Nehru proposed the Panchasheel strategy and also invited leaders of South-East Asian nations to participate in Asian Relations conferences hosted by India but due to internal disturbances and external disturbances like the India-Pakistan partition, Indo-Pak war and Indo-China war India isolated itself. Because of this isolation, India failed to maintain its position in the region. On the other hand, China made use of this situation and succeeded in gaining the attention of South-East Asian nations. Since 2000 we can observe the increase in the influence of China in the region. This posed severe economic and military implications to the countries in the region.

China surrounded India by developing overseas military bases in Pakistan and Sri Lanka. This causes a major security threat and poses economic implications for India. Modi’s Government in 2016, diverted India’s Strategic approach by replacing Look East Policy with Act East Policy. This replacement is done to make India more action-oriented and has the potential to start bringing its lost attachment with the Countries. Apart, from the changes at the individual level, India started joining hands with other important countries in the region. One such important grouping in the region is QUAD, which India sees as a potential player in maintaining stability in the region. India’s main interest in the region is maintaining security and to increase its influence. Quad can be seen as a major platform which India can use to fulfil its interest

Quadrilateral Security Dialogue (QUAD) is an informal forum which deals with a strategic security dialogue between Australia, India, Japan and USA. With the rise in china’s presence in the Indo-Pacific region, Quad is considered a potential platform to counter China. The earliest framework of QUAD can be observed in 2004 when the above-mentioned four countries formed a “Core Group”

during their joint response to the 2004 tsunami. They together contributed approximately 40000 military personals for rescue operations in majorly affected areas like Indonesia and Sri Lanka. Later in 2007, the “Confluence of the Two Seas” speech by Japanese prime minister Shinzo Abe set up an ideological foundation for the QUAD. In 2008 Australia pulled itself out from the Quad grouping as it affected its relationship with China. With the increase in China’s aggression revival of QUAD was possible. In 2017, Japan announced to propose a top-level dialogue with Australia, India and USA. And this time Japan clearly stated that the intention was to counter Chinese aggression. In 2019 First ministerial-level meeting of the quad was held.

Initially, Quad was more considered as a cooperation between countries rather than a strategic forum. Australia limited QUAD as a construct limited to trade and culture, Whereas India clearly asserted that Quad had “No Security Implication”. At present, Quad has gained prominence in the Indo-Pacific region because of which China is claiming it as a strategy to encounter it. Though, several nations believe that QUAD has the potential to counter China the open acceptance of this opinion is absent. QUAD nations state their vision as maintaining “FREE AND OPEN INDO-PACIFIC”. Though, the Vision is out rightly stated, these countries are open to the strategic minds which can further help them as independent nations as well as diversify grouping objectives which was clearly done in march 2021, when US president Joe Biden hosted the first-ever virtual summit of QUAD leaders followed by the first-ever in-person summit of QUAD leaders.

By realising the visions of QUAD, India can strategically explore the Indo-Pacific region by developing a naval front with the help of member countries. India can also utilise this grouping to counter china’s recent aggression within the borders by influencing the major trade check points in the Indo-Pacific region. As China’s major trade happens through the Indo-pacific Maritime route, hence influencing these trade checkpoints would help in retaliating china’s aggression both in domestic as well as in the Indo-Pacific region. India along with other QUAD nations should try to establish a defined motive by developing an overarching framework with the objective of developing the economic and strategic interests of the members.

China’s debt-trap diplomacy has posed severe implications in the Indo-Pacific region. This diplomacy can be regarded as a threat to the sovereignty and internal security of the victim nations like Sri Lanka. Hence India together with QUAD nations can build up an alternative debt financing model which eventually will help underdeveloped and developing nations in the region.India can take economic advantage of QUAD from five areas (Choudhury, 2021).

Though India sees QUAD as a platform to achieve its interests and objectives, the formation of the AUKUS grouping by Australia, the United Kingdom, and the United States of America might affect the functioning of QUAD. AUKUS is a formal military alliance that promotes security partnerships between English allies excluding India which might possibly affect the balance of power in the region. Whereas on the other hand QUAD largely runs on diplomatic ties. Against this backdrop,  AUKUS can bring opportunities for QUAD member countries like India and Japan in cooperating and collaborating in the exchange of technology and other strategic trades. Therefore, as a whole, any collaboration against Chinese aggression directly or indirectly acts as a net strategic positive for India as well as Japan and can also help QUAD in achieving its objective of “Free and Open Indo- Pacific.”

In the end, through various forms of cooperation and coordination, India can realise its geopolitical interest in the region. It should also enhance its bilateral relations with QUAD nations which can lead to economic advancement and can eventually result in strengthening India’s position globally.

China regards the QUAD grouping as “Asian Nato” and claims that countries involved in the grouping are “Ganging up” against her. However, against these claims, India has always engaged in diplomatic cooperation with China and also focuses on strategic ties with China. India is a member of SCO, BRICS, and RIC which proves that India has never cornered China in Asian politics. India always focuses on Maintaining neutrality and Multipolarity in the Indo-Pacific region, hence it considers QUAD as a platform to maintain the Balance of Power in the region.

Mohan. C. Raja, 2022, Why China is Paranoid about the QUAD, Foreignpolicy.

Tandon. Aakansha, 2021, Difference between QUAD and AUKUS and key commonalities of both alliances, Republicworld.