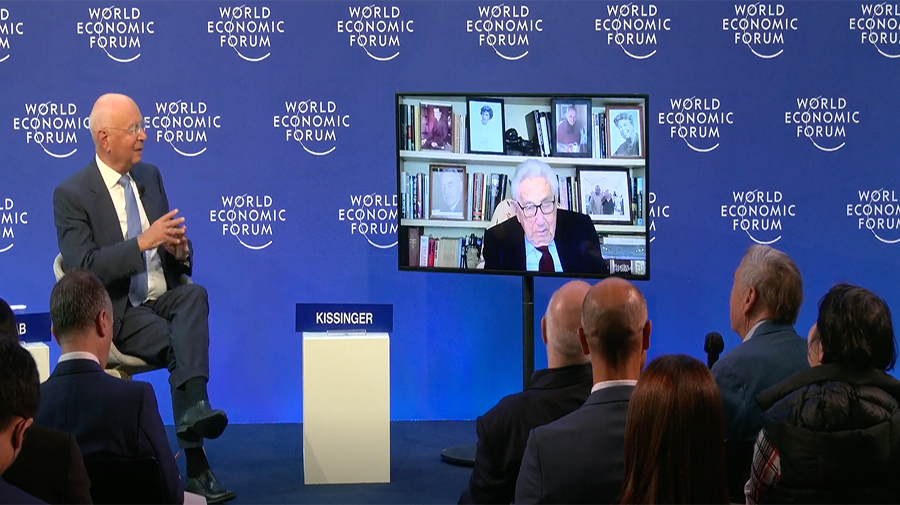 A statesman famous to some and infamous to others, Henry Kissinger, a nonagenarian doyen of diplomacy invites curiosity and criticisms of his global policy posture. I came to know about his name for the first time from my Professor at the University’s IR Theory class like a bolt from the blue. Professor in a nutshell designated Kissinger as a notorious National Security Advisor and Secretary of State whose Foreign and Security Policy decisions under the Presidency of Richard Nixon and Gerald Ford were controversial and fatal to American citizens. We refer to the Vietnam War where American GIs got a huge setback in the Asian Theatre that keeps reminding us of the brutality of guerrilla warfare counter-attacked by superior military forces. Kissinger opens his playbook with remarks and notes that beckon critics to counter-argue if they have ammunition of incisive strategic thought using the global lens. This time in the spring season in Davos 2022, he spoke a little in a husky voice and attracted impatient attention to listen to his analytic version of current trends in International Relations.

Kissinger’s provoking comments on Ukraine-Russia warfare have ruffled some feathers. He said that Ukraine should cede part of its territory to Russia toward a peace compact. “A polarizing high priest of realpolitik,” Kissinger’s Davos remarks were “patently unrealistic” in the case of Ukraine-Russia warfare. He said both parties should come to a diplomatic table talk in two months’ time and if they do not it would be difficult to overcome the conflict. This would redefine Russia’s internal focus and world outlook. Otherwise, it would alienate Russia and alter the European balance of power politics. Russia may align with China and the status quo ante (state of affairs as before) may not prevail if solutions to this conflict are nowhere to be seen or ended. Ukraine would inevitably be adamant about this Kissingerian view and never cave into Russia’s offensive realism. Some were unbelievable that Kissinger is still alive and scoffed at his cosmic justice. On his 99th birthday, he has reached “cosmic transcendence” according to others in comparison to any incumbents in the office of the Chief Executive.

He says Taiwan cannot be the core of negotiations with the US and China. Biden in the Japan Tour of the Quad Meeting expressed that America would intervene militarily if China invades Taiwan, a democratic self-governed island. Kissinger says it should not “by the subterfuge or by a gradual process” develop the Two China solution. Instead, America must

ensure that China exercises the maximum restraint and patience that has been practiced now. Biden’s remark, however, it has been said, has ended the deliberate and long-held tradition of “strategic ambiguity” over the Cross-Straits Questions of Taiwan status. The US has a robust unofficial relationship with Taiwan guided by the Taiwan Relations Act 1979 simultaneously acknowledging One China that governs bilateral and diplomatic relations of America with the PRC. Amid adversarial relations, Kissinger says an avenue to discuss this baffling problem provides a scope of cooperative efforts with the PRC. During his tenure in the White House, Kissinger oversaw the turning points in American Global Policy including an Opening Door of China to the Western World to contemporary balance power politics in a bloc rivalry of America with the erstwhile Soviet Union.

Frank Capell wrote a book entitled Henry Kissinger: a Soviet Agent with pages of 120 in 1992. There are allegations and threatening remarks levelled against this veteran diplomatic expert and some even harassed to kill him. His early years in the US Army stationed in Berlin and many stories tell that he reckons the terms and conditions of power politics and realism in international relations. It is natural and common that people who wield power and engage in dealing in foreign affairs are slandered and accused of being unpatriotic and sold out. But those who serve in internationalism and foreign affairs have to deal with and engage with people who are different. They have to negotiate on a quid pro quo basis and this is the enigma of international relations uneasy to fathom. Even academics and practitioners know there is a gap in policy, rhetoric and reality. A puzzle of subject and object or insiders and outsiders paradox is an open secret. The most interesting thing about IR is to build bridges, not create chasms, promote peace and end wars, foster cooperation and contain conflict, optimize interests and minimize suffering, find common benefits and avoid losses. Policy sedative and politics seductive sound realistic. It is like being a Chef preparing cuisine with varieties of ingredients and serving delicacies to your people. This is the art of serving policies either foreign or domestic.

Finally, Kissinger notes of the geopolitical challenges the world is facing right now are the status of pragmatism and long peace, existing and emerging powers and military technologies. There would be a defining moment of a trajectory in bilateral relations between America and China and its recalibration in world affairs. To take a cue from Kissinger’s essence about history is, that is always, at a turning point, in the evolutionary path despite annals of zigzag or ruptures in human society. Russia-Europe, the Ukraine War, the Middle East divisions,

Iran’s nuclear armament, India and Brazil’s regional power, concomitant economic repercussions and the constantly changing world portend a perpetual transitional phenomenon. These are challenges Kissinger put forward as an analogy that must be overcome to curb an increasingly confrontational and chaotic world.

Kissinger stated that “everything depends, therefore, on some conception of the future” two years of after his assumption of the principal National Security Advisor of the Nixon Administration. He said that America’s foreign policy should proceed from strategic blueprints rather than reactions to discrete events. “Statesmen must make courageous decisions with imperfect, often ambiguous information” (Winston Lord, 2019, Kissinger on Kissinger: Reflections on diplomacy, grand strategy and leadership, New York: St. Martin’s Press, p. 7). In negotiations, America’s point of departure should be “a clear exposition of its needs and an understanding of its interlocutor’s history, culture and goals…The indispensability of American leadership exercise compels American to integrate interests and values – an attempt to reconcile what is considered just with what is considered possible.”

Dr. Kissinger is “a bestselling author, pundit and mentor, a remarkable person grata of savvy, stamina and sway in the gravitas of state of international affairs.” According to Kissinger, statesmanship requires “both the vision to establish long-range goals and the courage to make the often narrowing decisions to move toward them…On strategy, there is the much more exacting challenge of dealing with fateful conjecture.” He further believes that when the scope for action is greatest, the knowledge of the terrain is limited or ambiguous. The more is known, the less the room for manoeuvre. And the more assessment differs from orthodoxy, the more severe the isolation.” This captures some essence of statecraft.

Suffice it to say, there is a plea for the Davos Men to get back to prevent the international system from falling apart. The world is said to be fragmented and needs empowerment by new notions of global connexus, it has been remarked. Professor Samuel P. Huntington in 2004 coined “Davos Men” to those policy analysts, practitioners, or global Sherpas climbing peaks and pinnacles of Policy Mountains who congregate at the Davos Hub. A meeting point of these transnational elites finds a chorus and concert in empowering ideas and analysis to solve pressing problems the world encounters. It converges like a global policy lab where innovative ideas emanate and churn in a mindscape.