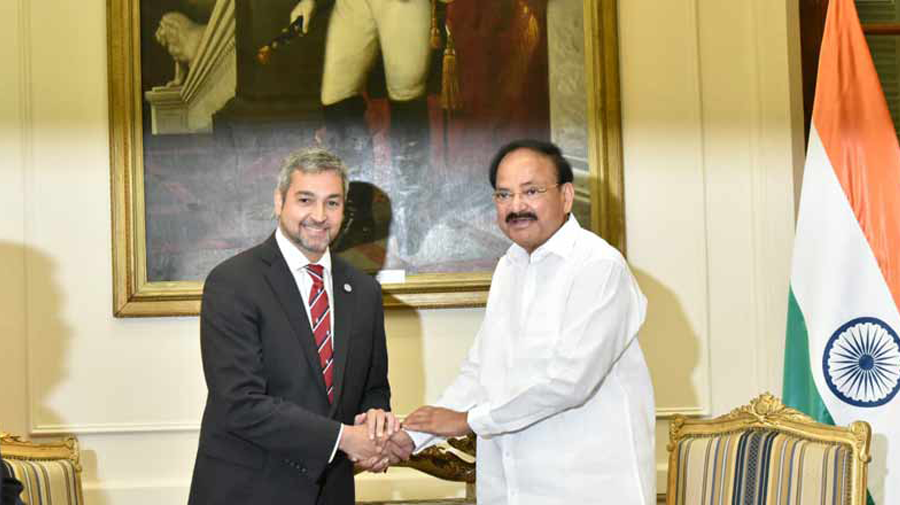 Paraguay, with a population of over seven million, is a small landlocked economy in South America. It is thus duly classified among the landlocked developing countries (LLDCs), most of whom face critical rudimentary economic challenges owing to their geography. The country has an estimated gross domestic product (GDP) of US$ 36.97 billion in 2021, with projections to become a US$ 49.5 billion economy in 2026. Paraguay is a member of the Mercado Comun del Sur (MERCOSUR), a trade bloc that was established by the Treaty of Asuncion in 1991, which also includes Uruguay, Brazil and Argentina. Also, Paraguay is an associate member of another economic congregation called the Andean Community which comprises of Bolivia, Colombia, Peru and Ecuador. Paraguay was once a Spanish colony and gained independence in 1811. In the early 1990s, the country embraced a multi-party democratic system of governance. In 1961, India established diplomatic relations with Paraguay. India-Paraguay engagements has been evolutionary. Some of the potential areas of bilateral cooperation are outlined here.

The bilateral relations in all political, economic and cultural dimensions have remained cordial. The bilateral trade also depicts a gradual growth trajectory, though with intermittent variations. As per the Export Import Data Bank of the Department of Commerce, Government of India, India’s export to Paraguay accounts for US$ 193.18 million in 2021-22, while the import stands at US$ 14.68 million. As compared to 2020-21, the India-Paraguay bilateral trade increased by 17.82% and accounted for US$ 207.86 million in 2021-22, which is 0.02% of India’s global trade. India and MERCOSUR signed a preferential trade agreement in 2004, and it became operational in 2009. Today, the two countries have immense potential to expand economic cooperation in multifarious sectors. Cooperation in mutually developing resilient supply chains and global value chains will help in increasing trade – both bilaterally as well as with MERCOSUR. There is an immense potential for India’s Outward Foreign Direct Investment in Paraguay in sectors such as minerals, and for supporting the Paraguayan micro, small and medium enterprises.

A key sector where India and Paraguay can collaborate and create mutual benefits is agriculture. Paraguay is a major producer and exporter of soybean. Besides, the country also produces wheat, maize, sugarcane, cotton and poultry; and in 2020, agriculture contributed 11.03% to the country’s GDP. India, on the other hand, has a robust agricultural sector that contributes significantly toward production, domestic consumption as well as export of agricultural commodities. The percentage share of gross value added by agriculture and allied sector to India’s economy has increased from 17.6% in 2018-19 to 20.2% in 2020-21. Some of the key areas of agricultural cooperation between India and Paraguay include agricultural equipment and machinery, fertilisers, food processing, horticulture, sustainable farming, agro-tech, and livestock. Indian firms can make investments in most of these sectors in Paraguay specifically, and of course across MERCOSUR too, and engage in cost-efficient production arrangements.

The ongoing pandemic has compelled countries across the globe to seek sustainable healthcare solutions. This is because most developed and developing countries alike faced critical healthcare related challenges during the initial waves of the pandemic. The healthcare system and ancillary infrastructure in Paraguay also remains inadequate. In 2019, the World Bank approved a loan worth US $115 million to Paraguay for enhancing its capacity for medical treatment related to child and maternal health, and chronic diseases. The key components of the healthcare system are the healthcare infrastructure, medical equipment and the pharmaceutical sector. India has an extensive healthcare and pharmaceutical sector with many Indian companies being among the major global players owing to their research and development, cost advantages, and supply chains.

By 2022, it is expected that India’s healthcare market will be worth US$ 372 billion. India was instrumental in manufacturing two vaccines viz. Covishield and Covaxin too, which has been administered widely in India and were also supplied to other countries. Importantly, the Union Budget of India for 2022-23 made an allocation of approximately US$ 11.28 billion to the Ministry of Health and Family Welfare. In Paraguay also, US$ 500 million was allocated to the Ministry of Health. Given the utmost importance and the resource allocations for healthcare in both India and Paraguay, there are several key areas in the healthcare sector where the two countries can collaborate in the future. These include pharmaceutical trade, research and development of generic medicines, co-production of medical kits and equipment, and of course, medical tourism.

Besides agriculture and healthcare, science and technology is a critical area of bilateral cooperation. Paraguay’s National Science, Technology and Innovation Policy aims at increasing the domestic research capabilities leading to the creation of a conducive environment for technology use and innovation. It is projected that by 2030, Paraguay will attain investment in research and development to the tune of 0.50% of GDP. In Paraguay, there are certain accelerators also that are pushing innovation in the field of science and technology.

On the other hand, India has been a hub for science and technology with many innovative programs working in order to support Science and technology across the globe. From policy to research, India has developed significant pragmatic advancements in this area. Thus, huge potential for bilateral (as well as regional at the level of MERCOSUR) cooperation exists in areas such as information technology, e-governance, digital health, industry 4.0, and artificial intelligence. Also, cooperation in sectors such as pharmaceuticals, biotechnology, metals and minerals, oil refining, and agro-tech would also be crucial.

In continuation of the possibilities in science and technology, another significant area is the cooperation in outer space. Paraguay announced the launch of its space program in 2014 and launched its space agency known as Agencia Espacial Del Paraguay (AEP). Lidovino Vielman Diaz, the architect of the space program, set the momentum for the launch of a Paraguayan satellite in the future. It was in 2021 that the AEP deployed a satellite to track a parasite that caused Chagas disease that affected an estimated eight million people in Mexico, and South- and Central America. This deployment was done through the International Space Station. In fact, Chagas disease, a vector-borne transmission, is caused by a protozoan parasite Trypanosoma cruzi, and can be life-threatening. Paraguayan space program thus aims to develop a scientific edge for the country through the use of outer space.

India, on the other hand, has an extensive space programme executed by agencies like the Indian Space Research Organisation (ISRO) that was established in 1969. ISRO has designed the Polar Satellite Launch Vehicle-PSLV which is credited for launching India’s Moon mission, Mars mission, and inter-planetary mission, among others. In October 2021, the Indian Space Association (ISpA) was established to create avenues for private participation in space activities. Today, India’s space economy is valued at Rupees 36,794 Crores, and contributes 0.23% to the country’s GDP. In fact, Paraguay can seek bilateral collaboration in the development and launch of satellites. Also, AEP can collaborate with ISRO to enhance its research capabilities in the area of space science and astronomy.

Finally, it is also imperative that focussed attention be given to enhancing bilateral cooperation, and strengthening the people-to-people connect. Importantly, the first ‘Festival of India’ in Paraguay was organised in November 2009 in the cities of Ciudad del Este and Asuncion. Besides the cultural context, technology remains the mainstay for evolving bilateral cooperation and attaining pragmatic outcomes. Moreover, the cooperation in new and emerging technological paradigms will be a major driver for cooperation between the two countries that stands more than 15,000 kilometres apart.

Dr. Faisal Ahmed
Author is a trade and geopolitical expert, and a Professor of International Business at FORE School of Management, New Delhi

Adarsh Nayan
Author is a student of the international business program at FORE School of Management, New Delhi
Tags:
Share:
Share this...