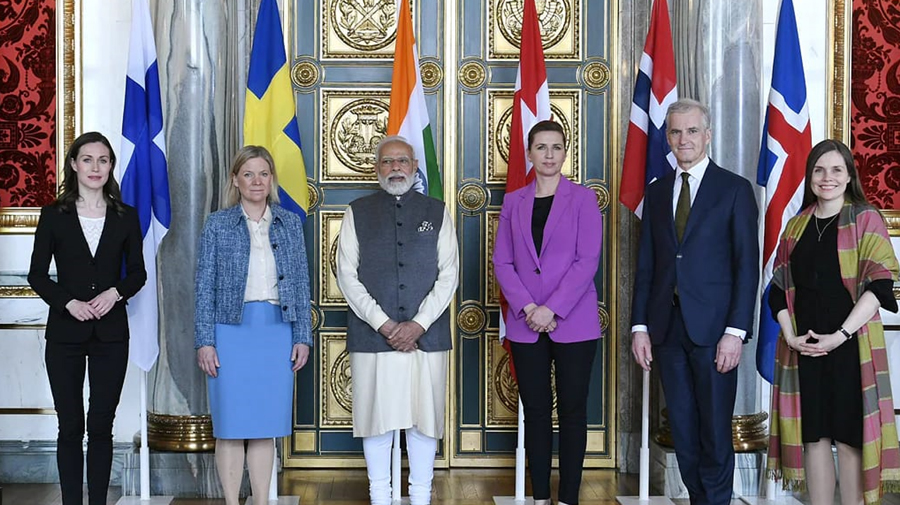 Prime Minister Modi visited Denmark as part of his three-day European tour, which also included Germany and France. He not only discussed bilateral ties with the Danish PM, Mette Frederiksen but also attended the second India-Nordic Summit on May 4. The leaders of all six participating countries jointly discussed the international challenges of tackling climate change, the COVID-19 pandemic, food and energy insecurity, biodiversity loss, the Russia-Ukraine conflict, and other matters requiring cooperation from the international community. The discussion also focused on bilateral issues such as a clean and green partnership, sustainable development, innovation and digital economy, trade and investment, etc. The event marked a key step in furthering India’s relations with the Nordic countries and could lead to a strong future partnership.

Historic relations and a new chapter

Most Nordic countries recognised India’s independence from the British in 1947 itself and established formal diplomatic ties within a few years. However, the Indo-Nordic connection goes back much before India’s independence to the early colonial era. The coastal city of Tranquebar (Tharangambadi) in Tamil Nadu was a trading station and part of the Danish-Norwegian settlements in India right from the 17th century until the British period. It is still home to Danish architecture, of which Fort Dansborg is the most famous. Following India’s independence, Norway was the first to provide assistance to Indian fisheries through a development assistance fund. Similarly, the 1960s brought a rapid wave of Swedish investments to India.

Cooperation in the twenty-first century began with the setting up of the Nordic Centre in India in 2001. It has served as a focal point for Nordic collaboration with New Delhi in research and higher education. There have been more than a dozen official bilateral visits of leaders and top ministers between India and the Nordic nations since then. The interactions have gained further momentum under PM Modi, and a milestone was achieved during his 2018 visit to Stockholm. He became the first prime minister to visit Sweden in more than thirty years, and it also marked the inception of the first India-Nordic Summit, aimed at dialogue and cooperation between India and the five Nordic nations: Denmark, Finland, Iceland, Norway, and Sweden. The only other country to have a joint summit with the Nordic countries is the United States. The relations have since been characterised by multiple recent examples of interaction between India and the Nordic nations, both bilaterally and collectively, including the Danish PM’s 2021 visit; Indian foreign minister Jaishankar’s visits to Finland and Denmark in 2019 and 2021 respectively; the Indo-Nordic-Baltic Conclave in 2020; etc.

Nordic cooperation with India is based on certain key international interests, such as democracy, climate change and the environment, global peace and security, energy, and lastly, bilateral trade and investment. The Nordic countries are highly democratic and all of them feature in the top six most democratic countries in the 2021 Democracy Index. They have always been advocates of democratic values and see India as a potential partner due to its status as the world’s largest democracy. India’s ties with Nordic nations are also based on its strategic interests. China’s non-cooperation with the United Nations Convention on the Law of the Sea (UNCLOS) is a major Indo-Pacific challenge for India. The Nordic support of a rules-based world allows India to cooperate multilaterally on this issue. Furthermore, Nordic countries consider India a major actor in maintaining international security and have repeatedly supported India’s aspirations for a permanent seat on the UN Security Council.

The impact of climate change and global warming on the Nordic countries is high due to their long coastlines and snow cover combined with their proximity to the Arctic circle. India’s large population and rapid development have made it the third largest contributor to greenhouse emissions, and it is therefore in the interest of Nordic countries to negotiate cutting emissions and help them towards cleaner alternatives. India’s Arctic Policy of 2022 has pledged greater participation as an observer in the Arctic Council and is a positive sign for the Nordic nations, all of whom are members of the same. The Nordic countries have also been at the forefront of effective energy transitions and could be of crucial help to India in technology transfer, scientific research, etc. The Nordic Sustainable Solutions mission has also worked in Indian cities and shares features with India’s Smart Cities initiatives. India and Denmark also announced a Green Strategic Partnership during a bilateral virtual summit in 2020. A new avenue for Indian collaboration with Nordic nations could be the blue economy, and PM Modi invited them to invest in the Sagarmala project during the 2022 summit.

Trade, diaspora, and other interests

The Nordic countries are all highly developed and high-income countries with a large scope of collaboration in the fields of technology, manufacturing, etc. The current bilateral trade of goods between Nordic countries and India is $13 billion. This could receive a huge boost as the partnership progresses. The Norwegian Oil fund alone has invested more than $150 billion in India. Also, Sweden has shown interest in collaborations with the Make in India and Digital India initiatives. The current summit also discussed how the process of a Free Trade Agreement between India and the European Union could be hastened. This would be a big boost to India’s economy if it were to materialise soon. Surprisingly, the Indian diaspora in the Nordic countries is limited to a hundred thousand people. Perhaps greater economic relations could lead to higher mobility for Indians in Nordic nations.

India’s outreach to the Nordic nations is not only born out of shared interests but also reflects its efforts to adapt to the changing world order. India’s proactive diplomacy and reaching out to often ignored countries is a sign of realigning its foreign policy towards its aspirations as a major power. India’s Nordic collaboration will help it achieve its sustainable growth and development goals while also supplementing its strategic interests. However, the vision for the engagement clearly goes beyond bilateral relations and is simultaneously aimed at important international challenges. Therefore, Indo-Nordic cooperation should also be seen as a possible channel for future multilateral action.

Dhruv Nilkanth
Author is an international relations student at the Jindal School of International Affairs. He has previously been a research assistant with the Centre for Middle East Studies at the O.P. Jindal Global University and a geopolitical risk intelligence intern at Mitkat Advisory Services. His areas of interest include the Middle East, Indo-Pacific and Europe.
Tags:
Share:
Share this...