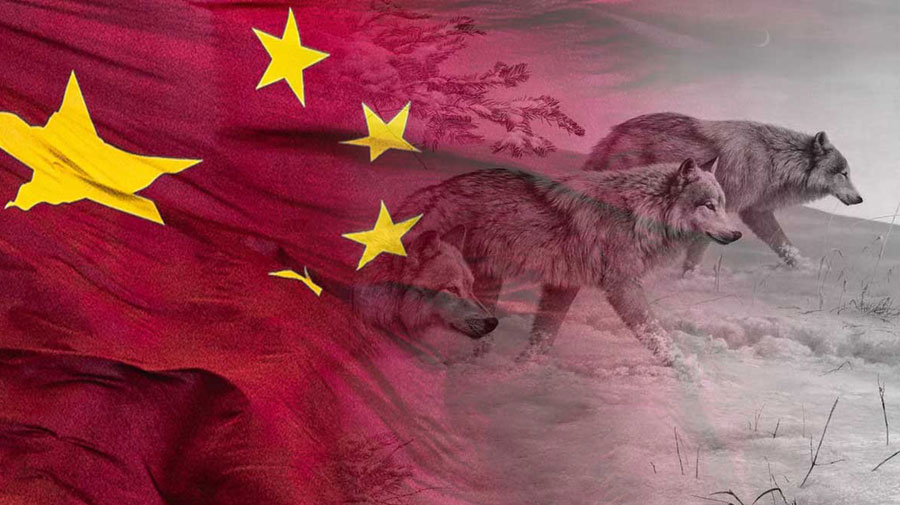 In October 2019, China commemorated 70 years of Communist Party leadership, where Xi Jinping echoed that “there is no force that can shake the status of this great nation. No force can stop the Chinese people and the Chinese nation forging ahead.” This explains volumes about China’s ambitions in the near future and Xi Jinping’s political and diplomatic ambitions in the forthcoming time. The changing character of China’s diplomacy has alerted the international community about Beijing’s ambitions in the near future. With its large economic surplus, massive overcapacity, and economic strength, China has transformed into an emperor-like state.

Beijing’s transitioning public diplomacy of soft power to hard power might be summarised using the terms Panda diplomacy and Wolf-warrior diplomacy respectively. Panda diplomacy may be elucidated as China using its endemic animal as a diplomatic lever.

China began to play a larger role on the international stage after 1978, when former Chinese Premier Deng Xiaoping implemented economic reforms that resulted in a significant change in China’s economy. As China grows more powerful in the 20th century, it is imperative for China to capitalize upon its soft power. China has the ability to boost its appeal to other countries and foreign publics, create trusting connections with other countries, and use an increase in soft power to entice other countries to listen to what it has to say. Soft power in public diplomacy is an important means of generating an effect within the minds of nations.

For many years, these Chinese public diplomacy instruments have been discussed. Many people concluded that Confucius Institutes, language and cultural exchanges, education, and Chinese celebrities abroad were the foundation upon which Chinese soft power could grow internationally, but many overlooked the uniquely powerful soft power resource China has had at its disposal for centuries: the giant panda.

Panda’s strong universal appeal attached to the exclusivity to mainland China makes Panda a unique candidate for animal diplomacy. The giant panda is one of the most highly adored creatures on the globe, which has features that sets it apart from others. This has not gone ignored by China, which has been loaning pandas to foreign countries since 1957, coining the phrase “panda loan”. This loaning of pandas is a Chinese public diplomacy tool and a way to transform their soft power into positive diplomatic outcomes. Formerly, panda diplomacy was hardly a debate in the academic circles, but has caught the attention lately.

China as the only home to the world’s panda population also recognises the importance of its gigantic pandas and has long included them into its foreign policy initiatives. For ages, the Chinese government has given pandas to foreign nations, the first known occurrence being when the Tang Dynasty, gave a pair of pandas to the Japanese emperor in 685 AD. China intends to strengthen its ties with other countries through a strong ideological commitment and a gesture of friendship by sending pandas as a goodwill gesture.

Through panda diplomacy, a foreign public’s interest in China piqued. China may acquire leverage by getting the target countries to listen to what Beijing has to say, making it much simpler to achieve its diplomatic objectives. As a kind of public diplomacy, instrument its efficacy in delivering a welcoming picture of China in the eyes of its target nations, whose perception of China would eventually advance.

In retrospect, China used to freely distribute panda. For example, after the Soviet Union recognised the People’s Republic of China in 1957. Pinging and QiQi, Chinese gigantic Pandas, has been presented as a gift. Similarly, the United States, France, North Korea, Mexico, United Kingdom, Spain, Germany, and Japan have all received Pandas from China. However, owing to the diminishing number of Pandas in the country, China sought to loan them after 1982. Therefore, post 90’s the old methods were replaced by providing the pandas as loans for a period of ten years. This exemplifies how China is promoting its soft power through Panda diplomacy. Panda diplomacy’s efficacy as a one-of-a-kind exhibition of Beijing’s soft power. Panda diplomacy (Fig.1) has taken a new turn since President Xi Jinping took office in 2012.  China has secured loan arrangements and transferred pandas overseas every year post Xi’s assumed the presidency.  This is in line with Xi’s founding of the Belt and Road Initiative (BRI), a flagship programme for the revival of the old silk route, as well as his larger objective of increasing China’s foreign policy footprints. During Xi’s reign, the pinnacle of panda diplomacy corresponds with the high of Chinese investment expenditure overseas.

Today the changing nature of Chinese diplomacy has raised many concerns, China claims as a revisionist power to the most powerful country in the world i.e. USA. Beijing’s departure from speaking softly, observing calmly, keeping a low profile and bade time lies far behind. This depicts a fundamental shift in China’s diplomacy especially during post Covid-19 pandemic. Many strategists name this assertive nature of China as ‘Wolf warrior Diplomacy’

Wolf warrior diplomacy, named after the famous movies, describes as an aggressive style of diplomacy adopted by Chinese diplomats in the 21st century under the leadership of Chinese President Xi Jinping. The use of combative rhetoric by Chinese diplomats, as well as the plenipotentiary’s greater readiness to refute critiques of China and pursue controversy in interviews and on social media, characterise Wolf Warrior diplomacy. The term has got into the wind since 2020, during the Covid-19 pandemic.

The major feature of wolf warrior diplomacy inculcates three fundamentals as a new brand of foreign policy. Firstly, extreme nationalism, which means the plenipotentiary, will defend the Chinese ruling political at any cost. Some events manifest it not just via confrontational words but also through aggressive acts. A Chinese coastguard ship, for example, is said to have sunken a Vietnamese fishing boat in the Paracel Islands in early April. In response to Vietnam’s protests, China’s foreign ministry stated that Vietnam’s claims to the territory are “illegal.” The Chinese Ministry of Natural Resources and the Ministry of Civil Affairs then announced the designation of 80 islands, reefs, seamounts, shoals, and ridges in the South China Sea on April 19, prompting outrage from rival claims. In 1983, China was the latest country to name islands and other physical features in the South China Sea. The Galwan conflict in eastern Ladakh, in which Indian and Chinese forces were immersed in an aggressive melee, is another example of Beijing’s aggressive activities in which Beijing claims external sovereignty and goes to great measures to achieve its wolf warrior diplomacy.

Secondly, telling a story remains another important theme in China’s aggressive parlance. The Chinese think that the portrayal of China by the western world is highly biased which is frequently tinged with ideological and racial overtones. This element of wolf warrior diplomacy is a part of an aggressive endeavour to paint a constructive image of what the west has created. The aggressive narrative of China is a result of the criticisms that Beijing is facing after the mishandling of the Covid-19 pandemic at a very initial stage and concealing the virus’s human-to-human transmission and above all failing to share all relevant facts with the international community. This is how the Chinese diplomatic community portrays the Chinese in a positive light.

Finally, during the Covid-19 outbreak, the most common theme in Beijing was to put an end to anti-Chinese sentiments around the world. It is mostly built on a counter narrative idiolect, which is a paradigm shift from the traditional method of restraining speech and keeping dignity to an aggressive mind-set of the leaders. This outlines how Chinese diplomats are waging a high-handed and frequently aggressive effort to preserve China’s national interests.

Victor Hugo, a French poet and novelist, once remarked, “Nothing can stop an idea whose time has come,” Today’s China has been substituted into an emperor like state with a belligerent verbose. Beijing wants to take the position of the US as the primary architect of a new security system. These revisionist goals aren’t hidden, and they don’t come as an element of surprise.

But we make perceptions upon the past and present evidences. Beijing’s retirement from conventional and traditional phraseology to more decisive, bold and authoritative rhetoric is the current China which the entire world is observing. A powerful China should be more confident and must be receptive to constructive criticisms. Moreover, a nation claiming big power status should remain modest and gracious as a nation proud of its great historical civilization. It should also have the fortitude to confess its poor management of the coronavirus right away and hold those responsible, accountable. The Chinese government should enhance the process that encourages local authorities to submit public health alarms quickly and efficiently, rather than hindering them.

Bringing back the old Panda diplomacy with soft overtones in parlance and in practice is the need of the hour. An eye for an eye approach on the contrary, will produce only a blind world.

Nichole Ballawar
Author is a Senior Visiting Faculty member at Nagpur's Government Law College. He has also served as a Research Associate at the Centre for Air Power Studies (CAPS) as a Defence Analyst for Janes. He has also worked as a China Research Assistant for the Ministry of External Affairs and as an Intern for the United Nations Development Program. He collaborated with organizations such as NIICE, The Diplomatist, and 9dashline, among others, and produced a number of research publications. He has written several essays on China, nuclear nonproliferation, and arms control.
Tags:
Share:
Share this...