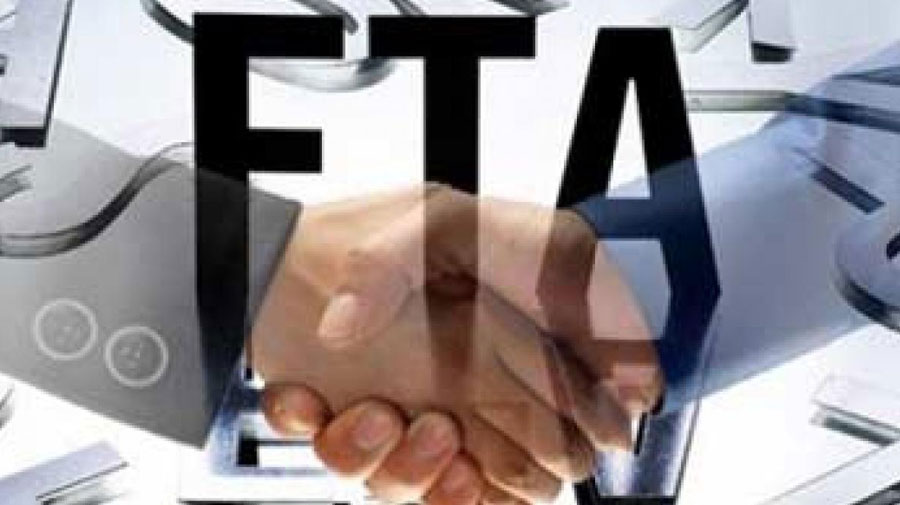 FTAs (Free Trade Agreements) are arrangements between two or more countries to come to a consensus on reducing or eliminating tariff rates and trade barriers between them. These agreements can extend to goods, services, as well as intellectual property rights, investments, and so on. FTAs aid countries in fostering a stronger and smoother relationship when it comes to trade and profits.

According to the Press Information Bureau, India has signed ten FTAs with various countries, for various purposes. This includes, but is not limited to, an FTA with Bhutan on trade and commerce, the SAFTA (South Asian Free Trade Area) Agreement with South Asian nations, the FTA with Singapore called the CECA (Comprehensive Economic Cooperation Agreement), with ASEAN, Japan, Malaysia, and many others. Apart from this, a plethora of our FTAs are going through negotiations, or are likely to commence discussion in a few months. This includes FTAs with the UAE, Israel, Australia, UK, EU, Canada, and others.

The recent withdrawal of India’s place from the RCEP with the ASEAN raised several questions about its strategy when it comes to global trade cooperation. This was coupled with the fact that at the beginning of the COVID-19 economic slowdown, the government urged citizens to opt for local brands and goods as opposed to imported ones.  However, before this could be explored further, the government went back to its stance of economic cooperation at the turn of the economy upwards. It began its negotiations on almost seven FTAs with the countries mentioned earlier. It is yet to begin its negotiations with Canada.

Several reasons could be attributed to this paradigm shift in the attitude toward FTAs. The rise of tensions between India and China, as well as between China and several other countries, has made countries turn a corner with resuming or restarting negotiations with India. For both India and China, geopolitical considerations play an important role in determining business engagements. For India, the dependency on China for imports came as a concern after the COVID-19 tensions, resulting in the Make In India wave as well. This has also motivated India to distribute this reliance with other nations as well.

The recent India-UAE CEPA is an important strategy in bolstering India’s engagement with other nations on e-commerce. While this has been undertaken in earlier agreements, they have been limited to the WTO requirements. In the UAE FTA, chapters on IPR, digital trade, and so on, have been included. This is a step forward for India, especially after its withdrawal from the RCEP due to concerns about provisions of e-commerce and digital trade. This is the first time India has included such a provision on digital trade in an FTA, which will be coupled with regulatory standards as well. The clauses on digital trade and e-commerce are also being discussed with the EU, Australia, the UK, and Canada.

Since India joined the FTA arena quite late, and has been very cautious of its agreements, it stands at a tariff disadvantage as compared to most other nations. This is due to its lack of FTAs with more developed economics like the EU. While discussions have taken place, they have been unsuccessful for the most part. It is estimated that upcoming FTAs with countries like Australia, the UK, and the EU will be broader in scope and focus more on trade integration. This exposes India to a slew of untapped potential areas of cooperation, and is quite a big opportunity for Indian businesses at the international level.

With the EU-India FTA, climate change and the environmental perspective will also be included in the negotiations, along with medicine and food and beverage. Similarly, with the USA-India FTA, greater emphasis is likely to be placed on labour, poverty, immigration, and so on. It is highly likely that these agreements will only add to India’s knowledge sharing as well.

A compelling argument of an untapped region for FTAs with India is that of the African Union. The AfCFTA (African Countries Free Trade Area) ensures that the countries of the African continent have a common market to carry out their trade. The potential of the FTA is still being debated upon, with current investments dominantly involving the extractive industries. However, growth prospects may attract other investment opportunities in agriculture, food, and the service sector.

India and the African Union enjoy a cordial trade partnership. Ten countries in Africa make up for 60 percent of India’s total trade with the Union. While there is immense potential here, a proper agreement might be a long way from home, due to issues like infrastructure, limited market knowledge, language barriers, limited financial capacities, and so on. Despite this, India has collaborated with Africa on issues such as information technologies, education, digital infrastructures, and so on. It can be asserted that India’s trade priorities could align with Africa’s in the near future, if the foundations are set earlier, and resources are tapped into from both sides.

In the larger scheme of things, India’s strategy is, and will undergo, a significant change in the coming decades, if not years. The need to combat China’s influence in the trade sphere, along with the efforts to bolster trade relations with other key nations of the world, is a motivating factor in India’s approach towards FTAs. FTAs will enable greater access to raw materials from countries with rich resource banks, like Australia, New Zealand, South Africa, USA, Canada, and many others. Apart from these nations, India also needs to re-evaluate its stance on all its other FTAs, or revisit some of the provisions for the same, so as to ensure they are in confluence with India’s current trade aspirations. This will include placing greater emphasis on technology sharing and transfer, among other novel things.