The Future of Ukrainian Refugees 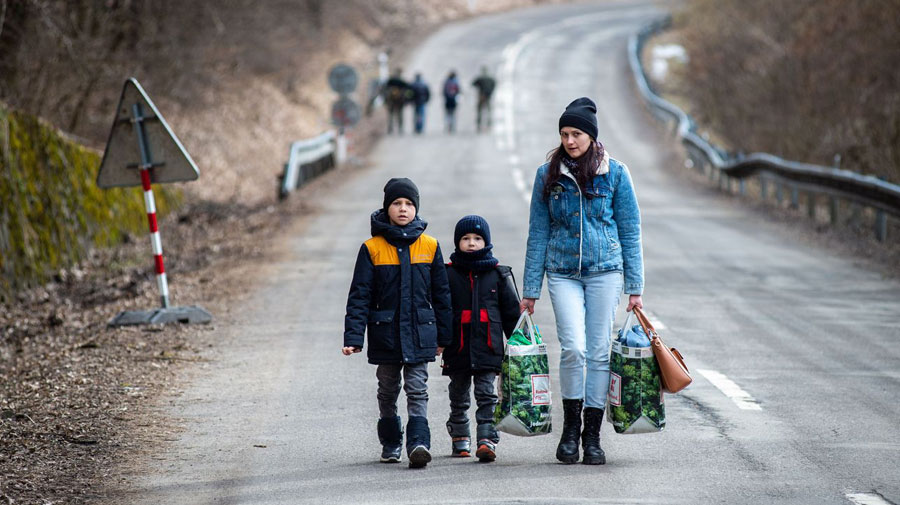 According to UNHRC,  a minimum of 82.4 million people around the world have been forced to flee their homes and among them, 26.4 million are refugees. Millions of such stateless people are denied a nationality and lack access to basic human rights such as health care, education, and employment. Adding to these numbers are the Ukrainians who have become refugees in their own country and continent. Millions of Ukrainian citizens have been forced to flee their homes and settle in nearby European countries, with a future so bleak and life so miserable.

In the ongoing refugee crisis that started in late February, more than 3 million people have left Ukraine and more than 6.5 million are believed to be displaced within the country. A report from VOX says, the refugees are arriving in the host countries in crammed-full trains, by car, and even on foot after walking for dozens of miles. Waiting in long lines at the borders and bringing whatever they could fit in their suitcases, those who could afford it have found their own accommodations, but others are staying in government-run shelters, hotels, churches etc.

The international community has for now opened their arms to welcome the refugees and Ukrainians currently do not compulsorily require any official documents in order to take refuge elsewhere in Europe. But they have been asked to at least take some documented proof of them being Ukrainian citizens and birth certificates of their child and other medical certificates to incorporate them better. While Europe has permitted the Ukrainians shelter, food and work for at least three years in 27 countries across the continent, the plight of leaving one’s own house is irreplaceable.

In the UK, the government has launched its “Homes for Ukraine” scheme under which the UK citizens can host Ukrainians in their own homes for a minimum of 6 months. For this, the host households will be offered a tax-free payment of £350 a month for up to 12 months, regardless of how many individuals they support. Poland, which is currently receiving the influx of refugees in the highest numbers, has asked for monetary help in order to host the refugees better. Moldova, with the largest concentration of refugees per capita, has also appealed for help in all means to deal with the still arriving large number of refugees.

Even though the housing issue of the refugees is being taken care of by the rest of the European countries, their attitudes towards the refugees are bound to change with depleting resources. The host countries are bearing the brunt of refugees now itself and in years to come, they will start becoming a burden to the hosts due to scarcity of all kinds be it jobs, houses, educational institutions and so on. Thus, providing them a shelter is a short-term initiative and cannot be called a long-term fruitful solution.

As the Refugee population will increase in number after some years, the fear of becoming a minority in their own land looms large among the host countries. Lack of resources and employment and better living conditions bring with it an immense number of issues like an increase in crime rates. People from the host countries fear losing their cultural values and identities. These are some of the long-term challenges which the hosts need to foresee when allowing access to homes and resources to refugees.

And the biggest challenge here is for the government and administration of the host countries to secure the interests and concerns of their own citizens as well as not let the refugees feel any different or discriminated against. If the government is unable to provide the required physical and emotional security to the refugees, this will simply add to the trauma that they are going through due to the crisis. At the same time, if the government is unable to secure the concerns of their own people, it might lead to clashes between the hosts and the refugees leading to more chaos.

To avoid such chaos and maintain long-term social stability, the onus is on the government and the administration to keep a check on the refugees, update policies and benefits with time, and invest more and more for their infrastructure and better living conditions. Measures like these will help maintain social stability and at the same time prevent anti-refugee sentiments among the host countries.

Another major challenge for the Ukrainians looms large in the form of racism and perceived discrimination as by the legal terms only Ukrainian “citizens” with at least some citizenship proof and documents are being given asylum and basic amenities in the host countries. This leaves behind a large chunk of Africans and Ukrainian immigrants who have fled other countries and been living in Ukraine for a long time. People who have work permits or students from other countries residing in Ukraine for further studies have been facing the same issue as other European countries are for now giving priority only to legal Ukrainian citizens first. Since the numbers are in millions, the possibility of homelessness among Ukrainian immigrants looms large.

Ukrainian refugees may not be able to return home for years now and in such a situation these challenges will turn out to be major blockers in peacekeeping and peace building. The UN says it is trying to offer all possible assistance to Ukraine in terms of setting up a Ukraine Humanitarian Fund under which it has requested a preliminary $550.6 million from member states as well as short term assistance like providing food, beds or transit points to the displaced. Besides this, various NGOs have also turned up in order to help the displaced and the distressed but all this solutioning will not cater to the long-term challenges that are looming large in this Ukrainian refugee crisis.

Ukrainians want to return home soon but looking at the current crisis situation, this seems like an impossible task. In such a situation, it is very difficult to determine what the future holds for the Ukrainian citizens. The only way their future can be made a little more secure is through better policy orientation, better aid and assistance and the feeling of oneness that only the host countries can bring about for these displaced and distressed refugees.