Ukraine Dilemma: Caught between the Bear and the Eagle 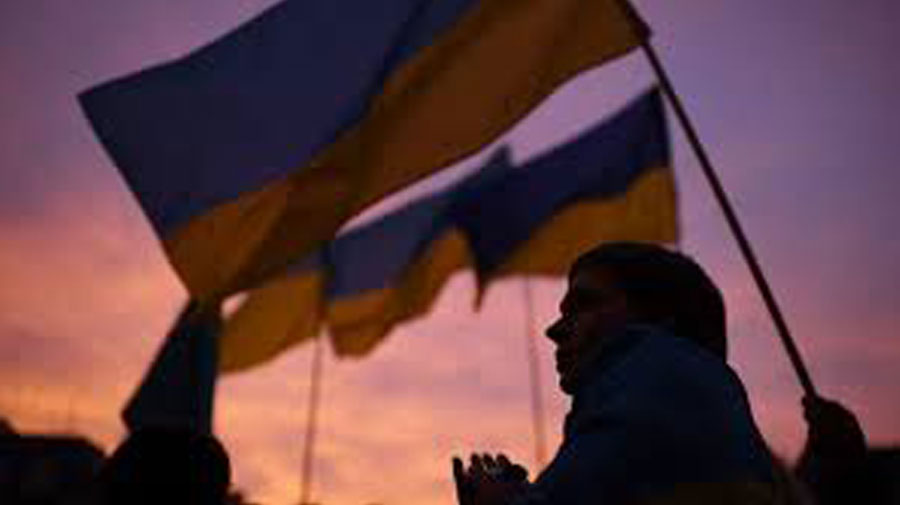 By now, the world knows about Ukraine well, thanks to the uncalled-for aggression by Russia on its territory, both for historical and strategic reasons. However, brushing up on some of the basic facts about Ukraine will help us to understand the issue in its proper setting. One cannot but appreciate the young actor-turned-politician Volodymyr Zelenskyy, the current President of Ukraine using the world media, of course with the tacit support of the US and the Western (including NATO) nations to tarnish the image of the Russian President Vladimir Putin.

The twin objectives of the US are to expand its influence on Ukraine under the holy pretext of saving democracy and human rights, which it had violated many times in Asia and Latin America in past decades; and secondly, to prevent the ‘evil empire of Russia’ expanding any further. As far as the Ukraine President is concerned, he is a secular Jew from the eastern city of Kryvy Rih who is now fighting for freedom of his country from the influence of Russia, thereby aspiring to go down in the history as a champion of the western model of democracy in eastern Europe in close proximity to Russia! Russia, on the other hand, has already annexed Crimea in the south and Luhansk and Donetsk in the east. Culturally, Russia and Ukraine share visible commonalities.

Ukraine, as we all know, is the second-largest country in Europe by area next to Russia. Ukraine shares borders with Russia, Belarus, Poland, Slovakia, Hungary, Romania and Moldova. The country has nearly 44 million (approx.) people making it the eighth-most populous country in Europe. The country has 77.8% Ukrainians and about 17.3% of ethnic Russians. Its Presidential form of democratically elected government enjoys the majority of 72% voting in favor, is headed by an uncompromising actor-turned-politician Zelenskyy with adequate political skills. His legitimate ambition for self-determination has unfortunately brought the war to the door of his country putting the lives of more than 1.5 million people including helpless women and children at stake, as refugees seeking protection in the neighboring countries such as Poland, Hungary and Romania and another 10 million (approx.) men and women between the age of 18 to 60, to serve as soldiers to fight in an otherwise avoidable war in the interests of property and the lives of the Ukraine people. Diplomacy, rather than conflict, must have been chosen as a possible course of action to save Ukraine. The International Court of Justice has ordered Russia to stop aggression as it sees no merit in Russian aggression.

Many scholars in the US, with whom I interacted recently, are keen to support the American form of Democracy and the influence of the capitalist system not only in Ukraine but all over the world to make American business and American power predominant in the so-called multipolar world.  In these efforts, both the Republicans and the Democrats in the US Congress are on the same page. American, Russian and Ukraine peoples, on the other hand, are disillusioned the crisis and want to lead a peaceful life in their home country, particularly after the  Pandemic took its toll destabilizing their economic and social fabric.

US President Joe Biden, celebrating his not-so-impressive one year of his Presidency, only helped to expose the visible weakness and inherent confusion of his administration both at home and in their foreign policy postures. At home, his administration could not control spiraling inflation, growing unemployment, the influx of illegal immigration from the Southern border and from Afghanistan bringing in more refugees into US, and the domestic violence due to lack of a firm ‘Gun policy’.  While democrats articulate the policies to “Build Back Better” America, as the Republicans claimed earlier to make “America Great Again” neither of these high-sounding rhetoric have had any requisite impact on the lives of the common people of America. In the sphere of foreign policy, US had witnessed a Hamletian dilemma whether to go for war or when to halt! Russian authoritarian regimes had no such compulsions in their domestic or foreign policies.

During the Cold war, the global powers initiated geopolitical bipolar areas of influence with the Soviet Union on the other side heading towards ‘eyeball to eyeball’ confrontations with the possible threat of using their nuclear capabilities to realize their objectives. They were the same powers who affirmed during the formation of the UN that they “are determined to save the succeeding generations from the scourge of war…” (UN Charter) an irony of sorts!

With the disintegration of the Soviet Union in 1991, many of its erstwhile territories claimed their independence, and Russia, Belarus and Ukraine mutually recognized their independence and became Commonwealth of Independent States (CIS). One would have thought that the Cold War fears and apprehensions had ended albeit temporarily.

But the mindset for hegemonic dominance was deeply rooted and reflected in their policy formulations and their allies, leading to peace breaking rather than peacemaking. This also provided them with an opportunity to show their strength or powerful “machismo”!  Ukraine and its people are the recent victims of the power game. The Budapest agreement promised by Russia in 1994 was violated by Putin’s Russia with impunity by aggressing the territory of Ukraine in 2014 and now 2022. Ukraine felt betrayed both by US, Russia and the Western (including NATO) powers. The Minsk agreement signed in 2014 and 2015 to end the war also failed.

US and its allies like UK and France, as expected, utilized this opportunity to mudslinging Russia and if possible isolate Russia and make it appear as an untouchable nation in international politics so that US could realize its long lost dream of being the most powerful nation as envisioned by Prof Francis Fukuyama in his otherwise ‘famous’ book “The End of History and the Last Man” (1992). The so-called post-Cold war did not witness a Unipolar world as predicted by Prof. Francis Fukuyama but gave rise to an economic and trade-related multipolar globalized world. Ukraine conflicts appear as a black spot in the desire for the peaceful coexistence of nations.

While the leaders appear ever ready to voice their aggressive rhetoric and a combat attitude, their people yearned for peace and economic stability. Common citizens in these conflict zones have been worst affected. Men, women, children – millions of them lost their life and livelihood and they were worst affected. They lost their properties, relatives, friends- and the scar cannot be erased for generations to come.

The First non-elected President of the United States, George Washington, gave wise advice to his countrymen. In his farewell address in 1796, while outlining his foreign policy recommendations, he said no nation should get involved in “permanent inveterate antipathies against particular Nations” or to get “a passionate attachment of one Nation for another”. The first, he argued would lead to an unnecessary war, while the second could lead to unwise treaty concessions. In fact, he echoed the principles of Non-Alignment (NAM) much before it was evolved as a post-world war policy prescription by the third world countries in the 60s!

India, which had suffered under the European colonization and the Imperialists forces, had always chosen a middle path, upholding its own National interest. The recent action of our Prime Minister Modi on the Russia-Ukraine crisis is very much in line with our traditional posture of benevolent neutrality. It’s worth recalling what Pandit Nehru, the first Prime minister of India articulated as a cabinet member of the interim government of India in 1946, which seem to echo George Washington’s farewell address. In a radio broadcast in 1946, Pandit ji said, “we propose, as far as possible, to keep away from the power politics of groups(of nations) aligned against one another, which have led to two world wars in the past and which may again lead to disasters (maybe) on an even wider scale…”. The establishment of the UN was done precisely to ‘prevent unnecessary and mindless wars’. Chapter VI of the UN Charter unequivocally emphasizes the ‘peaceful settlement of disputes’ before resorting to any sort of military action.  International law prohibits the use of unilateral military action except for verifiable self defense actions. India’s foreign minister, Dr Jayashankar could easily comprehend the situation and the power game being played  using Ukraine’s desire “as a pawn.”

Without recalling the policy of NAM which had been welcomed by several countries in Asia, Africa and Latin America, Prime Minister Modi understandably took to highlight the humanitarian crises and the plight of 18,000 Indian students stranded in Ukraine, out of more than 1.1 million Indian students studying abroad.

India’s Permanent Representative to the UN, Ambassador T.S. Tirumurti was however very candid in the UNSC when he called for restraining from “all sides” and reasserted that the issue could only be resolved through “diplomatic dialogue”. Now we see countries like Israel, Turkey and even China are ready to play the role of mediators before the crises gets out of hand leading to an unpredictable outcome. India, South Africa, Brazil along with France, Germany and the eastern European nations bordering Ukraine can make efforts to defuse tensions in the region. The UN Secretary-General, in his authority, can and should dispatch his special envoy to be part of the team and talk to both parties in conflict and insist on an immediate ceasefire and then work on confidence-building measures. We all know that both Russia and US and NATO have their fingers in the Ukraine pie, leading to the present conflicts. But it is high time they realize their great duty to preserve international peace and security and prevent and protect human resources of the region. The world has started facing economic problems created by the pandemic situation in the last two years, now this war has further added a heavy burden on the economic livelihood of innocent peoples of the developing and less developed nations. Our finance minister, Reserve Bank Governor and other international experts have already predicted the economic downturn because of this war and the pandemic situation.

It is time for warring nations to return to the table and declare an unconditional ceasefire. Ukraine has earned the sympathy of the nations, also their support for arms and huge funds from various sources. The Ukrainian President must now do whatever is possible to help his people. Going to the International Court of Justice and asking for more armaments from the West is not going to help Ukraine’s people at large. What is needed now is to stop the war, refrain from pumping more armaments, and work on humanitarian services. Ukraine’s president must work towards peacebuilding.

Last but not the least, the international and the local media covering the events must not fall prey to countries’ propaganda machinery. This will help to gather positive public opinion to end the conflict.