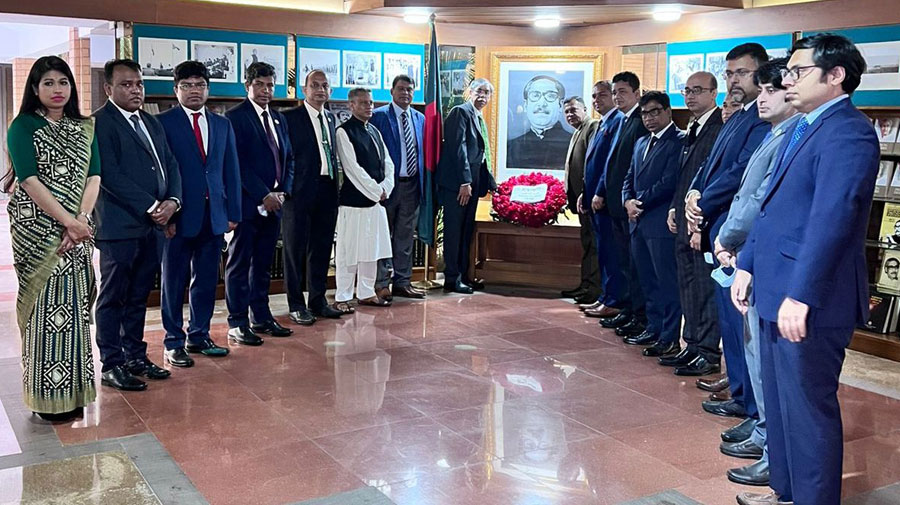 Bangladesh High Commission in New Delhi paid homage to Father of the Nation Bangabandhu Sheikh Mujibur Rahman today (Monday) to mark his historic 7th March speech in 1971 that galvanized the people of Bangladesh to prepare for the war of liberation.

Bangladesh High Commissioner to India Muhammad Imran hoisted the national flag at chancery premises. H.E. Muhammad Imran led the members of the mission to place a floral wreath at the portrait of Bangabandhu at the chancery building.

Describing the historic 7th march speech of Bangabandhu was one of the best speeches in the world; H.E. High Commissioner Muhammad Imran said the speech inspired freedom loving people to converse under a single umbrella against the suppression, oppression, discrimination of the then, Pakistani autocrat roller.

Bangabandhu’s historic speech was one of the most inspirational speech in world diplomacy apart from giving directives to the oppressed humanity to unite to free the Bengali nation, he added.

His historic speech was one of the most inspirational speeches in the world history towards world humanity.

A documentary was also screened on the historic speech of Father of the Nation Bangabandhu Sheikh Mujibur Rahman, which he delivered on the March 7, 1971.

Later, High Commissioner and the officials of the mission joined the live programme of the Prime Minister virtually marking on the day, organised by the Ministry of Cultural affairs.