Why Central Asia is important for India? 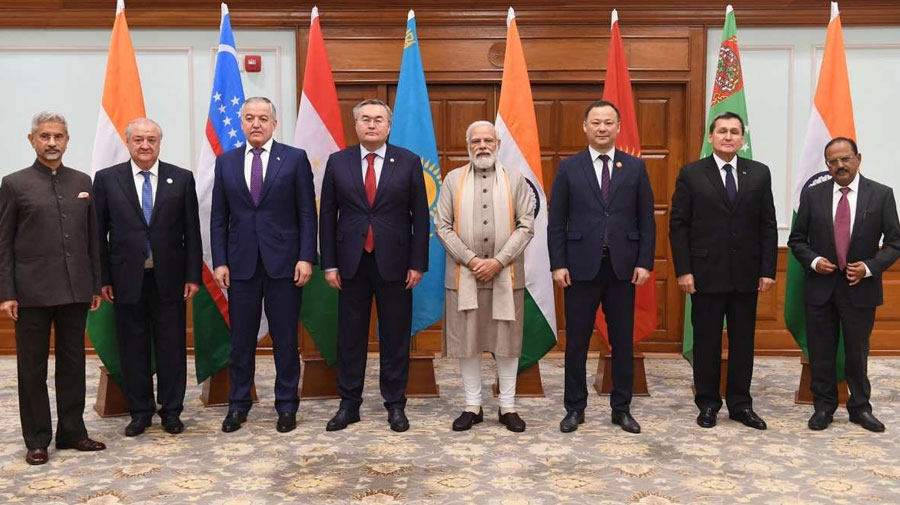 India and Central Asia have a long history of historical, cultural, political, and economic ties that have evolved into a stable, mature, and transformative partnership over time. India’s proximity to and growing convergence with the five Central Asian countries—Kazakhstan, Kyrgyzstan, Tajikistan, Turkmenistan, and Uzbekistan—has resulted in increased cooperation in addressing emerging geostrategic challenges in the aftermath of the COVID-19 pandemic and the changing world order. Simultaneously, the two sides have intensified their discussions and cooperation on issues such as trade and connectivity, economic development, development partnerships, energy security, regional issues of mutual interest, and each side’s shared geopolitical concerns about emerging challenges in Afghanistan.

During the third India-Central Asia Dialogue, which took place in New Delhi on 19 December 2021, the two sides reaffirmed their commitment to fostering robust cooperation in addressing emerging global concerns, while emphasising the critical importance of promoting security, stability, and long-term shared economic prosperity within the India-Central Asia geopolitical architecture. Prime Minister Narendra Modi’s historic visit to all five Central Asian countries in July 2015—the first time an Indian Prime Minister has visited all five countries in a single visit since their independence in the early 1990s—was a watershed moment in reviving the two sides’ socio-political and economic ties. Given the increased activism evident in recent years along the India–Central Asia corridor, one could argue that New Delhi’s push and leadership in reviving strategic convergence between the two sides is destined to restore much-needed equilibrium in India’s extended western neighbourhood. This, hopefully, will result in the effective containment of provocative posturing from all sides, while enhancing the efficacy of reformed multilateralism and global governance transparency.

The third India-Central Asia Dialogue held recently has had a catalytic effect due to the consolidation of the two sides, particularly in the context of rapidly changing geopolitical fault lines on regional and transnational scales, the launch of joint celebrations marking the 30th anniversary of diplomatic relations between India and Central Asian countries in 2022, the emerging imbroglio in Afghanistan, which falls within each side’s backyard, and the changing climate. The meeting also discussed new avenues of cooperation based on shared interests and the importance of deepening strategic engagement in the “4cs”—commerce, capacity building, connectivity, and contact—which encompass the dimensions of security and terrorism, trade and economy, development partnership, energy security, healthcare, and climate change. Even Prime Minister Modi emphasised New Delhi’s long-standing connectivity ties with Central Asian countries, while reiterating the commitment to enhanced politico-economic integration in India’s “extended neighbourhood.”

The Dialogue identified critical areas of strategic engagement aimed at strengthening defence and security ties, economic and connectivity initiatives, and energy cooperation, particularly in the context of candid and cordial discussions about India’s US $1 billion Line of Credit for Central Asian projects, connectivity efforts through the Chabahar Port, and the Turkmenistan-Afghanistan-Pakistan-India (TAPI) gas pipeline. The two sides agreeing to continue developing transit and transportation potential while also improving the region’s logistics network was another significant development. Simultaneously, the meeting discussed informally the optimal utilisation of the International North-South Transport Corridor (INSTC) in conjunction with the Ashgabat Agreement on International Transport and Transit Corridors (ITTC) in order to improve connectivity between India and Central Asian countries.

Concerning the security paradigm, both parties recognised the strategic imperatives for a peaceful, stable, and prosperous Afghanistan, particularly in light of the country’s geographical proximity to India and its land borders with three Central Asian countries—Tajikistan, Turkmenistan, and Uzbekistan. Keeping in mind the potential danger and consequences of terrorism’s spill over effect into the extended neighbourhood, the Ministers’ Joint Statement emphasised the following:

“the establishment of a truly representative and inclusive government, the fight against terrorism and drug trafficking, the UN’s central role in delivering immediate humanitarian assistance to the Afghan people, and the protection of women, children, and other national ethnic groups’ rights.”

The unanimity and reaffirmation of the strategic significance of UN Security Council Resolution 2593 (2021), “which unequivocally demands that Afghan territory not be used for sheltering, training, planning, or financing terrorist acts and called for concerted action against all terrorist groups,” was another significant factor that is expected to shape the trajectory of future consultations and action plans on the Afghanistan situation. To continue combating the scourge of global terrorism, the meeting urged the international community to work constructively to strengthen the UN-led global counter-terrorism cooperation, while expressing urgency in fully implementing relevant UN Security Council resolutions defining the Global Counter-Terrorism Strategy and FATF standards. In essence, the New Delhi Dialogue sends a clear and unambiguous message. It effectively demonstrates India’s and Central Asia’s partners’ determination to work cooperatively to ensure geostrategic equilibrium in the extended neighbourhood.

On the issue of energy security, the India-Central Asia Dialogue reaffirmed the two sides’ long-standing commitment to capacity building and connectivity enhancement. While New Delhi recognises and appreciates Central Asia’s significant endowment of energy-related natural resources, particularly in the form of large reserves of coal, gas, mineral resources, and crude oil, the meeting focused on enhancing collaboration in order to strengthen bilateral trade relations in energy resources. Increased cooperation between specialised national institutions in the fields of renewable energy and information technology is a positive step forward in the direction of energy cooperation.

With regards to COVID-19, while Central Asian countries appreciated India’s assistance in supplying vaccines and essential medicines during the pandemic’s early stages, New Delhi reciprocated by expressing gratitude for medical supplies received from Kazakhstan and Uzbekistan and the offer of assistance made by Turkmenistan during the second wave of COVID-19 in India in April-May 2021. Significant advancements in vaccine dose sharing, technology transfer, local manufacturing capacity enhancement, and promotion of supply chains for medical products, all of which are accompanied by price transparency, will have an impact. Simultaneously, expansion of trade and economic engagement demonstrates a commitment to maximising trade potential in critical sectors such as pharmaceuticals, information technology, agriculture, energy, textiles, and gems and jewellery. The initiative to establish direct links between India’s states and various regions of Central Asian countries through the establishment of twinning/partnership relations is destined to be transformative in terms of trade dynamics.

In recent years, the contours of the India-Central Asia relationship have undergone an unprecedented transformation, with growing convergence having the potential to usher in a paradigm shift in the extended neighbourhood’s geostrategic dynamics. The transformative effect of Indian Prime Minister Narendra Modi’s July 2015 visit has been bolstered by subsequent high-level exchange visits at various levels—all of which have consolidated the strengthening of strategic ties. The fact that the foreign ministers of the five Central Asian nations travelled to New Delhi in December 2021 to attend the third India-Central Asia Dialogue despite the threat of the Omicron variant and while deviating from the overlapping meeting of the Organization of Islamic Cooperation’s foreign ministers demonstrates the importance they place on relations with India.