Smt. Nirmala Sitharaman at the post-budget session by PHDCCI 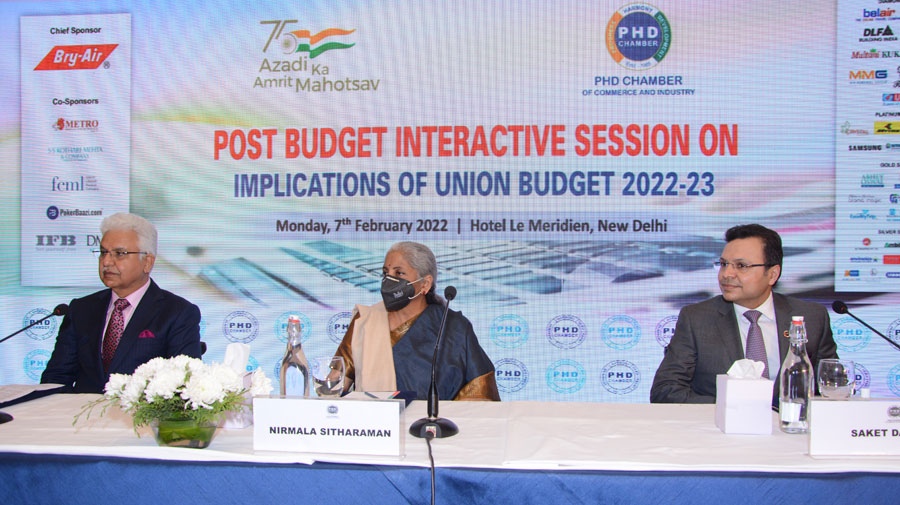 The Union Budget 2022-23 is highly promising, pragmatic, transforming, and progressive, stated Shri Pradeep Multani, President, PHD Chamber of Commerce and Industry (PHDCCI) in his address during a post-budget interactive session on the topic, ‘Implications of Union Budget 2022-23’ organized by PHDCCI.

He lauded the Union Finance Minister Smt Nirmala Sitharaman, who was also present at the event, for this year’s Union Budget. He said, “We are highly encouraged to see the focus of the budget on four priorities, which includes PM GatiShakti; Inclusive Development; Productivity Enhancement & Investment; Sunrise Opportunities; Energy Transition, and Climate Action; and Financing of Investments. I would like to say that this Budget looks into the future while keeping a close eye on the ground. It reflects consistency in the government’s approach in making India a modern, developed and inclusive nation.” He added, “We, at PHDCCI, are totally committed with the aim of our Hon’ble Prime Minister, Shri Narendra Modi to achieve the goal of a $5 trillion economy. We strongly feel that each one of us–government, industry, and bureaucrats need to work as a powerful team to achieve these goals.”

The Finance Minister Smt. Nirmala Sitharaman was welcomed by PHDCCI President Mr Pradeep Multani who gave an insight into the thought that went into preparing this year’s Union Budget, “Much has been spoken and said about the Budget,” she said, elaborating. India is at a stage where despite the pandemic we have to work on a two-track path – one is by rail, which has a multimodal approach and is guided by PM Gati Shakti; it is to ensure that we have a synergy with every mode of transport and linkages with logistics and ensuring that products reach their destination inside this country or outside. The other track is the opportunities with startups and the sunrise sector. The young generation is coming up with various unicorns, this has given us new returns and a mind to invest in these new minds. Compliances have been made easy and this will inspire the coming generation who want to do business.”

She added, “The emphasis on public investment and infrastructure has been done with a lot of consideration with other stakeholders, and this will only result in crowding in of private investment. This is an opportune time to invest as the corporate tax rate has been reduced and they can expand their horizons. India will be the fastest-growing economy this year and next year. India and the private sector need to work together as a team.

Concluding remarks were given by Mr Saket Dalmia, Senior Vice President, PHDCCI. The event ended with a Vote of Thanks by Mr Sanjeev Agrawal, Vice President, PHDCCI. Thanking the Finance Minister for gracing the event, he concurred, “The budget has very rightly touched each and every segment of the economy. The government has undertaken structural reform measures to boost economic growth and make the country an Aatmanirbhar Bharat. The qualitative change that our nation has witnessed in the last few years has become a model of sustainable development for many countries; as a result, India has a lot to offer to the world in the coming times.”