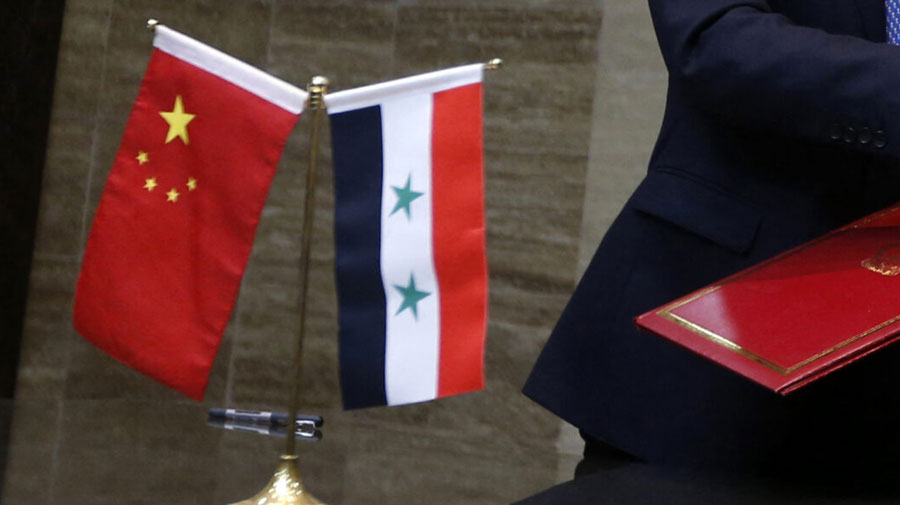 For a long time, China has been making efforts to make inroads in the Middle East through its economic and diplomatic overtures. In this series, China’s ambitious connectivity initiative, the ‘Belt and Road Initiative (BRI)’, received a significant push after Syria became a signatory to BRI on 12th January 2022. An MoU signed between China and Syria in Damascus placed Syria as the latest entrant among over 140 BRI participating countries. Syria’s decision to join BRI followed the visit of Chinese State Councilor and Foreign Minister Wang Yi’s visit to Syria in July 2021 and a subsequent phone conversation between Chinese President Xi Jinping and Syrian President Bashar al-Assad in November 2021. Syria claims that its participation in BRI would not only facilitate post-war reconstruction but also draw socio-economic development. Endorsing the claims, China’s state-run Xinhua also stated that the development would not only boost bilateral ties between the two countries but also multilateral cooperation with those nations, who are seeking pragmatic cooperation with Syria.

A myriad of factors, inviting criticism to BRI projects, including being uneconomical, interfering in local governance, exploiting natural resources, Chinese debt-trap policy and adversely impacting local job market as well as the environment, has not desisted other Middle-Eastern nations, including Saudi Arabia, Turkey and Iran from being a signatory to the BRI. One of the reasons attributed to the allurement of several countries towards this initiative is that, unlike the US and West, Chinese investment and funding comes with no strings attached, in terms of human rights and democracy, even for troubled and autocratic regimes.

Syria, undergoing a civil war situation for the past few years, needs China’s BRI for its infrastructural development to initiate reconstruction and socio-economic development of the country. As per UN estimates the rebuilding of war-torn Syria would need around $250 billion. Syria’s geo-strategic location, offering Beijing access to the ports of Tartus and Latakia in Syrian Mediterranean Sea, provides China with multi-billion dollar investment opportunities in projects in the field of infrastructure, telecommunications and energy. Moreover, the Syrian participation would further strengthen Beijing’s footholds in Greece’s Piraeus as well as Israeli ports of Haifa and Ashdod. While, China may participate in Syria’s reconstruction process, as in Africa, it is keen to secure its energy supplies from the oil-rich Syria and develop a secondary route to the Mediterranean and southern Europe as well.

The significance of Levant in BRI project diplomacy cannot be gainsaid, particularly with regard to China-Central Asia-West Asia economic corridor because it provides China an option to diversify its trade routes and curtail its dependence on Suez Canal. Notably, China is developing a Special Economic Zone (SEZ) near Tripoli Port (Lebanon). The SEZ allowing China lower taxes/ tariffs can facilitate it to export varied items to Syria at competitive prices. China believes that Syria’s strategic importance outweighs the political turmoil prevailing there, hence, the development of close Sino-Syria relations would be mutually beneficial in the long run. A politically and economically stable Syria would be better equipped to confront the challenges of terrorism and extremism. Thus, Chinese economic and strategic objectives, including support to keep activities of Islamist elements under check in its Xinjiang province that perceives its religious affinity to Central Asia and the Middle East, would be served better, by Syria.

President Assad has consolidated his position in Syria, with the political and military support; he has been receiving from Russia and Iran. However, such assistance is gradually losing its relevance as the war in Syria is also gradually moving towards its end. Hence, Beijing with its economic propositions now intends to acquire a more dominant role in Syria’s economic and political landscape.

For its post-war reconstruction, Syria needs efficient electricity-generating plants, construction of infrastructure projects, food processing plants, production units, machinery etc. Significantly in these areas, Chinese companies enjoy much competitive advantage over Moscow or Tehran, as also witnessed in the case of African continent. Hence Syria’s move to join the BRI project aims to affirm this Chinese assistance. In fact, Beijing’s presence and cooperation with Damascus/Assad regime is not new. According to a 2017 Israeli intelligence report, thousands of Uighur were fighting in alliance with the ISIS and Al-Qaeda affiliates against the Assad regime, in Idlib, the strong hold of Al-Qaeda. However, Beijing enhanced its cooperation, militarily and in intelligence sharing, with the Assad led Syrian government, to ensure the elimination of such groups.

Even on the economic front, in 2018, Chinese President Xi offered US $20 billion in loans and US $106 million in financial aid to the Middle Eastern States including Syria. Of this, it is estimated that around US $90 million was set aside for Yemen, Jordan, Lebanon and Syria only. Data from the Chinese Ministry of Commerce confirms that Sino-Syria’s total bilateral trade, recording a year-on-year increase of 33 percent, stood at US $1.3 billion in 2019 with Beijing’s investment in Syria being US $13.7 billion by 2019. China’s assistance to Syria with regards to the delivery of COVID-19 vaccine in early January 2022 coupled with Chinese grant worth $40,000 to ‘Syria Trust for Development’, a non-profit organization focused on development, indicates the existing level of cooperation prior to Syrian decision on January 12, 2022 to join the BRI.

Syria’s joining of BRI might have irked US and its closest ally in the Middle East, Israel. Regional states are already exploring the potential role of China in resolving the regional quagmires inter alia including Arab-Israeli conflict, Iranian nuclear deal, Yemen’s conflict and other issues emanating from time to time. Israel, despite being wary of China’s growing footprint in the region, appreciates Beijing’s investments at Haifa port and Tel Aviv ‘red line’ metro project. Meanwhile, Israel is also apprehensive that enhancing Chinese investment in the country may annoy the US, hurting not only its defense relations with the US but may also compel US to revisit its unequivocal support to Israel at global forums like UN. Additionally, US also views Beijing’s intention to mediate the Israeli-Palestine conflict as a challenge to its authority and influence in the region. Moreover, China’s mediation could also be detrimental to the Israeli side, owing to the former’s growing proximity with Islamic countries.

It is evident from the pattern observed in the states, including Sudan, Pakistan or any African country, which joined the BRI project that China either directly or in the garb of UN Peacekeeping Forces (UNPKF), deploys its troops to ensure the security and safety of its BRI infrastructure projects. Hence, Syria’s participation in the BRI project may have implications over Israel’s pro-active and aggressive policy of attacking Iran-backed militias and Hezbollah forces in Syria via airstrikes. Israel may face some reluctance in bluntly targeting the Iran-backed militias, particularly in the areas, where Chinese BRI projects get underway. Consequently, it may shift to covert in-land operations on Syrian land via its special units, that may also reduce the precision and accuracy rate in eliminating the targets. Israel is known for, besides, raising an element of risk in case the operation goes awry, owing to terrain complexities. Furthermore, any dent in its aggressive policy may embolden that militias and non-state actors to challenge Israel via the porous borders that Syria shares with Israel and put Israel’s national security under threat.

On the diplomatic front too, bilateral relations between Israel and China may suffer a setback if Beijing sides with Damascus to question the joint US-Israel strategy in the region and asks Israel to revisit its aggressive policy towards Syria. On the other hand, as Beijing considers Israel an important destination in its BRI strategy, hence, it would be interesting to see how Syria’s inclusion into the BRI would play out the recalibration of regional alignments in upcoming years. Meanwhile, it is no hidden fact that China has stepped up its role as an economic guarantor in the Middle East and continues with its forays on the diplomatic and political front, to replace US as the main superpower in the region. On its part, while Israel requires a cautious approach and a considered assessment of Beijing’s footprints in the region, particularly in its neighboring states, Syria may witness a spurt in its reconstruction efforts and infrastructure growth but it must remain vigilant in its dealing with China, considering the shared grumbling experiences of BRI participating countries across the world.