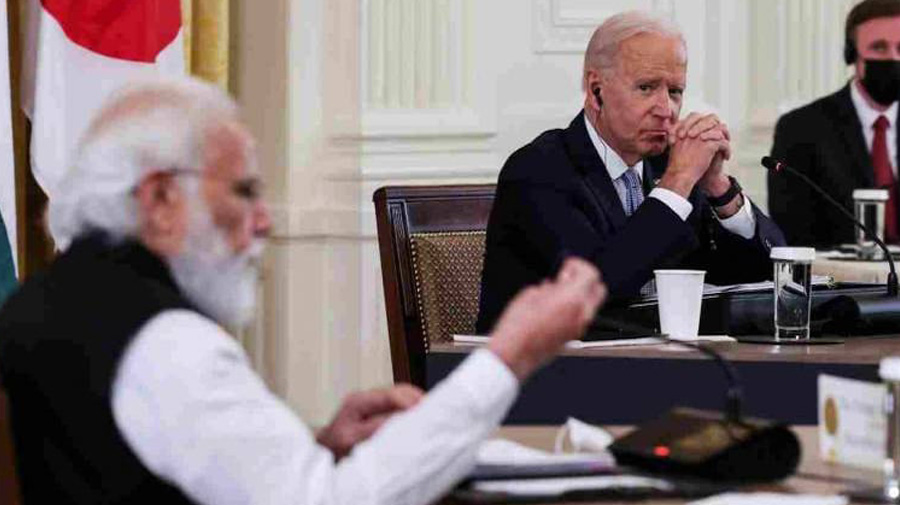 The economies of the Indian Ocean Region (IOR) and Indo-Pacific as a whole have been regarded as the most critical geographies. Concurrently, a tremendous rise in security concerns related to vital sea routes and lines of communication, aggressive maritime militarisation, and the scramble for natural resources have threatened the region’s transformation (Panda, 2020). At the same time, increasing Chinese assertiveness is the biggest concern for significant economies across the IOR, which in turn has given birth to several minilaterals like a Quadrilateral Security Dialogue (QUAD); the Indo-Pacific QUAD, the West Asia QUAD, and a trilateral security pact namely the AUKUS (Australia, United Kingdom, and the US) with the United States of America (US) being one of the common strategic element among all seeking to reconfigure the Indo-Pacific balance of power.

For India, the new security agreement is inextricably tied to its participation and strategic calculations vis-à-vis the QUAD. In particular, AUKUS highlights some of the key dilemmas that India ought to face concerning the QUAD, whether it should share or pass the burden to restrict Chinese belligerence in the Indo-Pacific or commit to even greater reliance the United States as its strategic partner (Miller, 2021). India finds itself in a swivelling position to counterbalance its bilateral interests vis-à-vis the two QUAD’s, especially the new “West Asia QUAD.” For India, to become part of the grouping constitutes a radical departure from its long-pursued foreign policy involving dehyphenation. If it gets institutionalised, the group will also be against Iran since Israel considers Iran, its mortal enemy.

To demonstrate its strategic presence across the Indo-Pacific region and counter the Chinese aggression vis-à-vis, its growing influence in challenging the regional status quo has made the United States of America (US) and its strategic allies reorient the Quadrilateral Security Dialogue or QUAD, in 2017. QUAD is a grouping of four countries, namely India, Japan, Australia, and the US, termed the Indo- Pacific QUAD, whose origin can be traced back to the evolution of Malabar Exercises and the 2004 Tsunami. The grouping’s motive has been to secure a rules-based Indo- Pacific, freedom of navigation, and keep the strategic sea- routes in the region free from any military influence. In March 2021, US President Joe Biden hosted the first-ever Indo- Pacific QUAD summit virtually, attended by the leaders of the four-member states, followed by the first-ever in-person meeting on September 24, 2021, at the White House.

The birth of the QUAD as a single strategic space from the vision of Indo-Pacific involved two underlying objectives:

a) The first was that the US, Australia, India, and Japan have a vested interest in upholding the rules and norms of the current world order; and ensuring freedom of trade and navigation, thus promoting trade ties and connectivity across the region.

b) The second was, all the member states believed that Chinese influence and the reach of its Belt and Road Initiative (BRI) posed a serious threat to the region.

The QUAD nations have been convening regularly, reaffirming regional security and non-proliferation, upholding international law, enhancing connectivity and economic development across the IOR. The Indo-Pacific QUAD is more like an informal grouping with no military dimension. The member states agreed to cooperate on the global issues of climate change, sharing of science and technology expertise, fostering trade and connectivity, and the need for solving humanitarian and economic challenges caused by COVID-19.

Post the QUAD being formalised for the Indo-Pacific region, the US has taken the lead to constitute another four-member grouping for West Asia, with India being one of the strategic elements. The West Asia QUAD comprising India, the US, Israel, and the United Arab Emirates (UAE) had its first-ever meeting with foreign ministers on October 18, 2021. This grouping is significant in the deepening strategic and political alliance between India and the US. After the withdrawal from Afghanistan, the US and its western allies have been groping for ways to recalibrate their strategy in West Asia. The United States involving India as a close and strategic partner in the West Asia QUAD signifies how deeply India has become involved in the US administration’s anti-China manoeuvres. The maritime interests discussed in the meeting focused on controlling the sea lanes and, in particular, the Bab-El-Mandeb strait, which connects the Arabian Sea and the Gulf of Aden to the Red Sea, and the Suez Canal. Like the Malacca straits, which fall under the purview of the QUAD for the Indo-Pacific region, the Bab-El-Mandeb strait is a potential chokepoint for Chinese maritime presence.

Another trilateral security pact, namely AUKUS, comprising Australia, the United Kingdom (UK), and the US, was jointly announced by the leaders of three member states on September 15, 2021, to counter China. Under this pact, Australia will be provided with the technology to develop nuclear-powered submarines. The AUKUS grants Australia exclusive rights to join the strategic club of only six world powers, the US, UK, France, China, India, and Russia, to counter Beijing’s adventurism. Other vital areas under AUKUS are high technology and defense-industrial cooperation, effective underwater capabilities to AI, quantum computing, and cyber warfare.

India’s swivelling position across the two QUAD’s and AUKUS

The new minilaterals illustrate that India is now ready to shift from bilateral relations conducted in separate silos towards an integrated regional policy. Across Indo-Pacific and in West Asia, regional coalitions are bound to widen Delhi’s reach and deepen its impact. India’s strategic approach for the Indo-Pacific focuses more on the Indian Ocean and less on the Pacific Ocean. In contrast, the Chinese assertiveness arouses concern for the US, Australia, and Japan. India swivels across the broad spectrum that it would like China to be contained but does not want to be the only one containing Chinese expansionism; it relies on diverse sources of defense equipment, including Russia. With the West Asian Quad being formed, India would like not to disturb its relations with Iran but rather maintain its non-alignment stand to balance its strategic fulcrum across the new minilaterals and bilateral relationships.

The policymakers in India noticed that under AUKUS, the US is sharing coveted technology with only one strategic ally of the Indo-Pacific QUAD. The US is unlikely to quit West Asian politics, but it wants to reduce the regional burdens and strengthen its local partnerships. One of the crucial gains for India’s current foreign policy and its engagement with the QUADs will see the simultaneous expansion of Delhi’s cooperation with Japan, Australia, Israel and the Arab world. A QUAD without India would have less credibility in the IOR and would immediately lose the significance of “Indo” in the “Indo-Pacific.”

Rohan Malhotra
Author is working as a Young Policy Professional with DST-CPR IISc Bangalore. Presently, he is hosted at DST Government of India, New Delhi. He has done his B.Tech in Mechanical Engineering from Chandigarh Engineering College and further pursued Masters in International Studies from Symbiosis School of International Studies, Pune. His research interests include studying of strategic technologies from the perspective of geopolitical scenarios focusing on how India's diplomatic conduct will be reshaped using Science as a tool with a solution-oriented practice in key sectors.
Tags:
Share:
Share this...