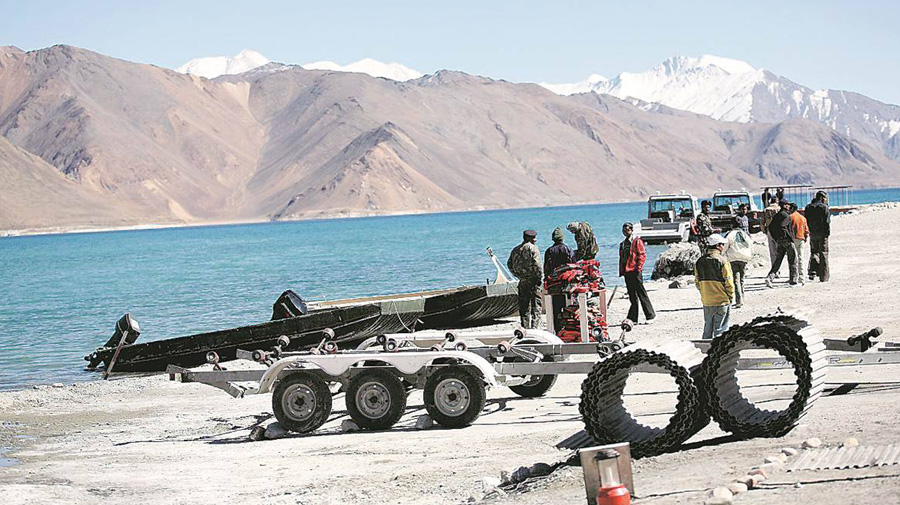 The Line of Actual Control (LAC) which separates Indian controlled territory and Chinese controlled territory witnessed partial disengagement from both sides in early 2021, after several rounds of high-level military talks. In January 2022, both sides held the 14th round of these dialogues. They were preceded by the bloodiest (if not the longest) crisis at the Sino-Indian border in the past 50 years.

In September 2014, there was a three-week standoff between India and China as the latter opposed the Indian construction of a canal in the border village of Demchok; in September 2015, there was a face-off between troops of both sides in the Burtse region of northern Ladakh; in June 2017, a standoff occurred at Doklam near the Doka La pass; in May 2020, soldiers from both the countries engaged in a fistfight at Pangong Tso lake, which was followed by faceoff at the Muguthang Valley in Sikkim; in June 2020, violent face-off caused the death of an Indian colonel along with his 19 soldiers.

Writing about the emboldened Indian approach to fight back after the massacre of its soldiers in Galwan, Foreign Policy in its article titled, ‘Did India Just Win at the Line of Actual Control?’ mentioned, “What followed [after the Galwan clash] was a concerted effort to use all of the economic, diplomatic, and military power at India’s disposal to push China to return to the status quo—what it called a “strategy of hurt.” This strategy was a dictum to Beijing hinting that India would inflict economic, diplomatic, and military costs.

India marked the biggest mobilisation of its armed forces near LAC in recent decades. This signified the reorientation of the country’s military policy towards its northern borders, which was highly Pakistan-centric for almost half a century. The same article by Foreign Policy mentioned that the Indian army has positioned its three divisions, including one armoured one, in the eastern Ladakh. It wrote, “The air force also shifted its foremost assets to the area, including MiG-29s, Sukhoi-30s, and Mirage 2000s. The navy’s P-8I Poseidon aircrafts also conducted reconnaissance and surveillance missions over the high Himalayas.” To counter Chinese attempts of enhancing military build-up here, New Delhi has recently deployed upgraded L70 anti-aircraft guns on the high mountains in the Arunachal Pradesh region along with the deployment of lately inducted M-777 howitzers and Swedish Bofors guns. Outlook in its article titled, “Arunachal Sector: India Boosts Firepower Along LAC To Counter Chinese Aggression” stated, “India has a sizable number of Bofors howitzers in the eastern sector which forms the backbone of its firepower capability in the region.”

The crux in its Youtube video titled, “Amid Tensions With China At LAC, How Indian Army Is Gearing Up For A Harsh Winter At The Border” mentioned that the Indian Army is equipped with the latest Finnish Sako Sniper Rifles, Israeli Negev Light Machine Guns, the American Sig Sauer Assault Rifles, variety of advanced drones, and K9 Vajra T Guns. Around 50,000 to 60,000 additional troops have been deployed by India along the LAC, according to military officials. The Indo-Tibetan Border Police (ITBP) is also assisting India’s strategic border build-up. It is planning to recruit an additional 10,000 troops to deploy along the LAC who will be responsible for guarding 47 Border-Out-Posts (BOPs). The ITBP has filled all the vacancies in this region and also sent its many doctors as well as paramedical staff to eastern Ladakh and nearby locations. The number of warehouses has also been increased by the force to store the ration which hints the preparation for the long haul.

The road construction along the India-China border is happening at a rapid pace under ‘India-China Border Roads (ICBRs)’, which are classified as ‘strategically important’. Besides ICBRs, the Ministry of Defence (MoD) has planned to build additional 104 roads which are around 6400 km long. These roads are along LAC in Ladakh, Himachal Pradesh, Uttarakhand, Sikkim, and Arunachal Pradesh. Also, to avoid delay in their execution, the government has appointed an ‘empowered committee’. More than 75% of roads along the LAC are ready and facilitating quick mobilisation for Indian troops. The Border Roads Organisation of India has played a significant role in expanding India’s presence along the LAC. In 2019, BRO built close to 60,000 Km roads in the country. Last year, Rajnath Singh, the Defence Minister of India, spent an entire week in the Ladakh region to inaugurate more than 60 bridges across six states and two union territories.

The 4G services in four forward villages in Ladakh launched by the district administration have leaped expanding reliable voice and data connectivity along the LAC. The Reliance-Jio voice and data services are inaugurated in Demchok, Chushul, Nyoma and Durbuk. The Centre’s Universal Service Obligation Fund has financed these projects.

Commenting on India’s new way of looking at the China problem, GP. Capt. (Dr.) R Srinivasan, an independent researcher and the Managing Editor of Electronic Journal of Social and Strategic Studies, said, “At least the present government has reacted (please note that it also woke up only after Galwan) and announced infrastructure development, procurement of new weapon systems, etc. However, announcing that border roads are being developed is not to say that they will be available for use immediately.”

He also enumerates things New Delhi must keep in mind to secure its position at LAC- 1) The infrastructure and weapon procurement must be hastened by cutting down red tape. 2) More importantly, diplomatic pressure should be brought to bear to an extent that the Chinese halt provocations. It is time to tell them bluntly that they are in illegal occupation of Aksai Chin, Karakoram Pass, and 22000 sq km of Pakistan Occupied Kashmir (ceded to them by Pakistan). The Chinese must halt all activities in these territories if fruitful settlement of border issues is desired.

Strengthening of border infrastructure not only enhances the mobilisation capability for Indian troops along the Sino-Indian border but also fosters India’s Act East engagements. Also, even though both countries are currently moving towards disengagement at the borders, this is not the last time they will be having conflict. Due to the ongoing infrastructure push along the LAC, India will be able to take control of any conflicting situation at its earliest. Maj Gen Ashok K Mehta (Retd) in his article for The Tribune mentioned, “The lesson from Ladakh is that India will have to fend for itself along the LAC for a long time to come. No foreign soldier will join the standoff; nor will India ask for combatants.”