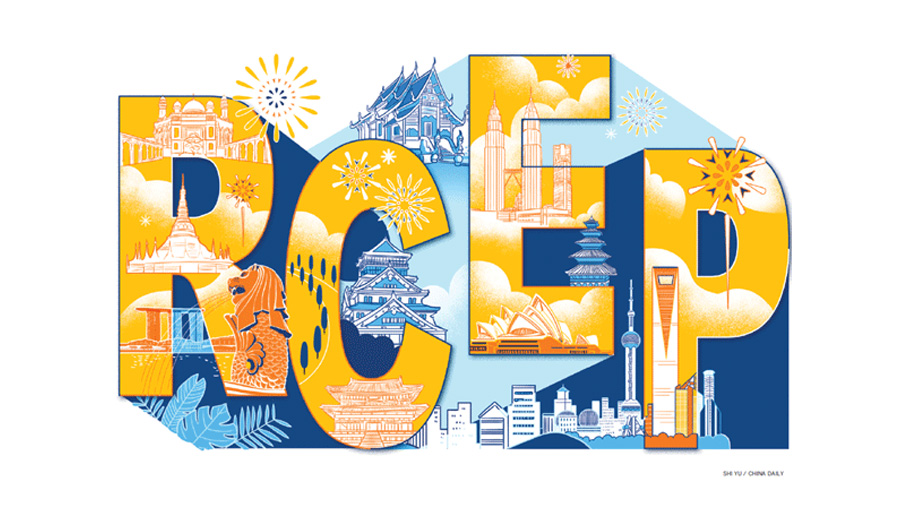 The world’s biggest free trade deal, the Regional Comprehensive Economic Partnership (RCEP) came into force on January 1, 2022. Over a decade in the making, the RCEP was introduced at the Association of Southeast Asian Nations (ASEAN) summit that took place in Bali (Indonesia) in 2011. The countries comprising 10 ASEAN (Brunei, Myanmar, Cambodia, Indonesia, Laos, Malaysia, the Philippines, Singapore, Thailand and Vietnam) with five partner countries (Australia, China, Japan, Korea, and New Zealand) are the members of this agreement. It represents a collaborative market of more than 2.2 billion people, covering about 30 percent of global gross domestic product (GDP), worth $26.2 trillion and nearly a third of the world’s population. It is also significant in that it is the first free trade agreement between China, Japan, and South Korea, three of the four largest economies in Asia.

With countries in the Asia Pacific trying to recover from the COVID-19 pandemic, around 90 percent of trade tariffs are set to be eliminated under RCEP in a major boost to inter-regional trade. The direct economic benefits of RCEP are projected to be quite significant. For the world as a whole, it is expected to increase incomes by 263 billion dollars a year, 2.6 million jobs and brings in 496 billion dollars’ worth of exports. According to the U.N.’s trade department UNCTAD, RCEP would boost inter-regional trade by $42 billion, raising the Asia Pacific region’s position as a “center of gravity” for global commerce.

But the benefits of the trade bloc are likely to be uneven among the 15 member signatories. While some analysts feel that China, Japan and South Korea are likely to be the major beneficiaries, others have opined that small countries like Cambodia, Myanmar, Laos and Vietnam have the greatest potential to gain because the RCEP gives them the choice to change in terms of reforms they wish to bring in. India’s main concern was that it could be flooded with cheap imports from China that is why it withdrew from the RCEP in 2019.

as a competing and more inclusive agreement than the US-backed TPP, which later became the Comprehensive and Progressive Agreement for Trans-Pacific Partnership (CPTPP), also known as TPP11, which has 11 countries rather than 15, includes some countries from the other side of the Pacific as well, Chile, Peru, Canada Mexico. These are more advanced countries, the agreement is smaller but it is at the same time it is a state-of-the-art agreement with nearly zero tariffs and much more rigorous rules to promote trade. So the two agreements overlap, they are complementary and in the long run, they will encourage trade in the East Asian region. Former President Barack Obama pushed for the precursor of the CPTPP, the Trans-Pacific Partnership (TPP) as an integral part of his ‘pivot to Asia.’ But Obama’s successor Donald Trump would scrap that component as one of his first acts as president in early 2017. Japan then stepped in to take the lead with the TPP rechristened as the CPTPP coming into force in late 2018. The CPTTP is a significantly watered down version of what the US had initially proposed, despite that, it was a very ambitious agreement much more than what we have in the RCEP.

Although the immediate economic benefits of the RCEP are most likely to be modest, the deal has widely been seen as a geopolitical victory for China at a time when US economic influence in Asia-Pacific has waned. By withdrawing from the TPP under the Trump administration, the US has lost its influence to shape rules of trade deals. A PIIE paper however suggests that the RCEP and the CPTPP would together more than offset the global negative economic impact of the China-United States trade war.

Having more parties involved in an agreement is probably more impactful, and that’s the way business is conducted these days. On the other hand, what is required in the region are different alternatives and also for countries not to be completely dependent. This is going to be a tremendous challenge especially as the United States is not part of the framework. To accommodate for the diverse membership of RCEP, with rich countries like Singapore and poorer countries like Laos and Cambodia the agreement had to be flexible which translates into generally a lack of prescribed depth. Experts say that the minimum bar set under the RCEP as far as things like labour, safety standards or subsidies is quite low, likely in order to accommodate the huge diversity in the size of the 15 participating economies. So that also means that compared to the CPTPP, the RCEP gives nations more options in terms of protecting a certain percentage of their industries. But 82% of the trade flows covered by the RCEP are actually covered by pre-existing agreements between member countries, so as a trade agreement with a 20-year time horizon it will definitely make an impact on the global economy but in the short term, it will not have a very sizable impact on trade.

India did not join the RCEP because “Indian concerns were not addressed.” India runs a huge trade deficit with ASEAN countries and was looking for specific protections for its industry and farmers from a surge in imports, especially from China. In 2018-19, while India’s total imports from RCEP countries was US$172.9 billion, its exports accounted for only US$67.8 billion. This trade deficit has weakened India’s financial condition and creditworthiness, while also limiting its options to adopt unconventional monetary policies The government is in fact looking to review its trade pacts with South Korea and ASEAN. But there are other factors that affected India’s decision; the present government wanted to push Prime Minister Narendra Modi’s grand vision of restarting the economy and making it more self-reliant which he laid out in May 2020, in addition to his earlier “Make in India” initiative. It may create opportunities for Indian firms active in machinery, chemicals, and transport equipment but manufacturing enterprises in food and agriculture will be adversely affected. Importantly, the RCEP has not made any arrangements on lowering Non-tariff barriers (NTBs). Indian firms would have had a hard time competing with Chinese state-owned enterprises that have access to all kinds of official and unofficial support. So although there may seem benefits to joining the RCEP in terms of integrating effectively into regional value chains and attracting greater investment, the current post-Covid19 struggling Indian economy is yet ill-prepared to embrace a trade deal like RCEP.

Also, does it matter that the world’s biggest economy and largest democracy have no part in the big trade deals of the moment? China, to which two-thirds of the world looks as its largest trade partner, has long drawn strategic strength from an equivocal economic prowess. It is the region’s biggest echelon. It is the single biggest trading partner for all Asian countries. But at the same time, there is a lot of concern about China’s rules of engagement. Further, while the strong economic component may have been a consideration, political and security aspects of the relationship with China are too pressing to be completely ignored.