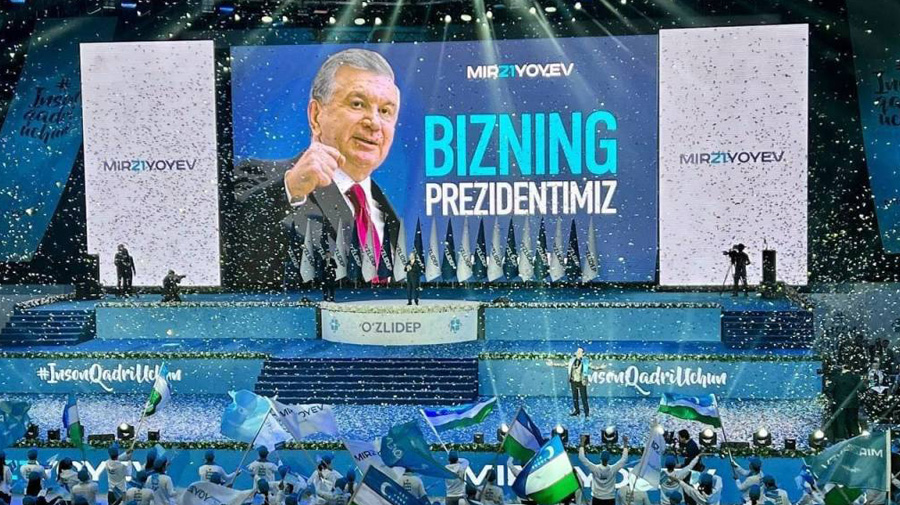 On October 25, 2021, the Central Election Commission announced the preliminary results of the Presidential elections of the Republic of Uzbekistan.

In this regard, the Movement of Entrepreneurs and Business people – the Liberal Democratic Party of Uzbekistan held an event at Humo Arena Complex in Tashkent. Activists and supporters of the party took part in it.

The voting became a reflection of the broad support of the people of Uzbekistan for the course of reforms and transformations, the results of which are clearly felt in their lives, the embodiment of the confidence of citizens in the future. Over the past five years, unprecedented large-scale work has been carried out in the country under the leadership of Shavkat Mirziyoyev. The spirit of updates has reached every sphere. In accordance with the Action Strategy for five priority areas of development of the Republic of Uzbekistan in 2017-2021, the most important administrative, legal and economic reforms were implemented.

During this period, the country’s economy grew by 24 percent, industry by 34 percent, exports increased by 1.5 times, the volume of foreign investment by 3 times. The country’s gross domestic product has reached $60 billion. The average monthly salary increased 2.2 times. Large-scale opportunities have been created for the development of regions, the expansion of industry and the service sector. Hundreds of enterprises and factories, thousands of new jobs have appeared. Large-scale construction and landscaping activity was carried out.

Practical effectiveness, human interests are put at the forefront of reforms. Socially oriented programs have been implemented. Much attention was paid to the development of science, education, healthcare, culture and art, mass media and sports.

On the eve of the elections, the New Uzbekistan strategy was developed, designed to consistently continue this work, bring the development of the country and the life of people to a new level. Voters were widely informed about the goals and content of the program during pre-election meetings, and citizens believed in the success of the strategy.

Speaking at the event, Shavkat Mirziyoyev thanked people for the trust placed in him.

“The trust of our great people is a great happiness for me! I express my deep gratitude to all my fellow party members, our young people, dear mothers and fathers for the high trust and support they have shown me. This trust gives me strength. And at the same time, I feel with all my heart how much responsibility this is”, Shavkat Mirziyoyev said. It was noted that in these troubled times, many difficult challenges have to be overcome, and our people, united, with their inherent diligence and dedication, achieve tremendous success.

“We have passed any kind of trials in the last five years! They hardened us. Brought us closer together. We are united. Today the world has seen again what a united people are capable of”, the President of Uzbekistan said.

It was emphasized that the Presidential elections, held for the first time based on the Election Code, were held in the spirit of democracy, openly and publicly.

“Observers came from many countries, major international organizations. They could visit any polling station of their choice and see the created conditions, making sure that our people are not indifferent to the future. They actively participated in the elections, came to vote together with their families. This testifies to the spirit, mood and political culture of our people. At meetings, people make relevant proposals for each area, city or district. Criticism also sounds. This is also the result of the fact that our lives have changed, democratic reforms are being carried out. I want to say again: there is no way back. Now Uzbekistan will only move forward”, Shavkat Mirziyoyev said.

The President thanked all foreign and local observers, members of the Central Election Commission, district and precinct election commissions, and media representatives.

He also expressed gratitude to the candidates who participated in the Presidential elections from other political parties. “They also strive to develop Uzbekistan. Therefore, we will take into account their proposals in our program, which our people liked. Yesterday we were competitors, but now we need to act as a single fist. I promise to use all my strength and potential to justify the high trust of our people, to fulfill their dreams and aspirations, to ensure a prosperous life. We will all build a New Uzbekistan together”, Shavkat Mirziyoyev said.

According to preliminary results unveiled by the Central Election Commission of Uzbekistan on 25 October, Maksuda Vorisova from People’s Democratic Party was placed second with 6.6% of the votes. Alisher Kadyrov from Milliy Tiklanish gained 5.5%, candidate from Ecological Party, Narzullo Oblomurodov received 4.1%, and least of the votes, 3.4% were for Bahrom Abduhalimov from Adolat Social Democratic Party.

“According to the electoral law in the country, the candidate who receives more than half of the votes cast will be considered the winner,” said Zayniddin Nizamhodjayev, Chairman of the Central Election Commission.

More than 16.21 million people cast their votes in the presidential elections held on Sunday, he added, noting that the voter turn-out was 80.4%.

“The presidential election, which took place in a real competitive environment between five political parties and their candidates, is a clear indication that freedom and democracy are increasingly being consolidated in Uzbekistan,” he said. No complaints about irregularities in the election were reported, he went on to say. The country with a population of about 35 million people, has a total of more than 20 million registered voters. As many as 10,760 polling stations were set up across the country for the presidential election.

Observers from the CIS, the SCO, OIC, the OSCE and from other foreign countries including India attended the elections. In particular, the delegation headed by the Chief Election Commissioner of India visited Uzbekistan monitored the election processes.

Presidents of foreign countries, including Russia, Turkey, Kazakhstan, Belarus, Tajikistan, Turkmenistan and many others held a telephone call with Shavkat Mirziyoyev to congratulate him on his victory in the Presidential elections.

Prime Minister of India Narendra Modi also congratulated President Shavkat Mirziyoyev on his electoral victory and expressed confidence that the strategic partnership between the two countries will continue to strengthen during his second term.