Diplomatist > Home Featured > Regions > World > Has AUKUS ended all hopes of a Quad plus France?

Has AUKUS ended all hopes of a Quad plus France? 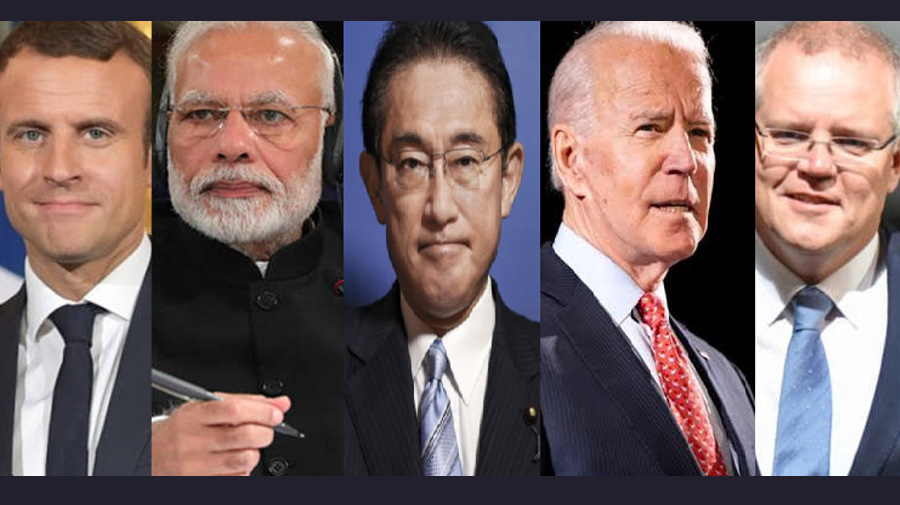 The announcement of the AUKUS security pact last week created shock and furore in the French defence and foreign ministries. Under this trilateral alliance, Australia will receive help from the United States of America and the United Kingdom to acquire nuclear-powered submarines. This deal comes at the cost of Australia’s deal with France for diesel submarines. France’s foreign minister condemned the pact and French ambassadors in Washington and Canberra were called back. This incident has deeply impacted France’s relations with all three countries and will take time and require mutual efforts to restore trust. Therefore, arises the question, does AUKUS mean that all hopes of France joining the Quadrilateral Security Dialogue are lost?

Ever since the revival of the Quad in 2017, there has been speculation around a possible expansion of the grouping. France has been at the helm of discussions, followed by the UK. The Quad is a grouping of like-minded nations who came together with the aim of maintaining a free and open Indo-Pacific. France too, shares democratic values and interests in the region. They also share friendly ties with all of the member states. Therefore, it was indeed a move worth considering for Paris. France also has interests in penetrating and developing bilateral ties in the ASEAN region.  Additionally, France has a major stake in the free movement of goods across the Indo-Pacific and has numerous overseas territories in the region. The growing territorial assertion coming from China is a cause of concern for the French too. Chinese control of multiple ports in the region including a military base in Djibouti being a worrying sign for them. Thus, it seemed a logical move for France to consider joining the Quad as a step towards its Indo-Pacific policy.

A new high in France’s partnership with the Quad

In April 2021, the La Perouse exercise of the French Navy was held in the Bay of Bengal. At first, France was joined by the navies of all four Quad countries. This was a landmark in the context of the country’s partnership with the Quad, but more than that a hint of an increased likelihood of the Quad adding a new member soon. However, the AUKUS deal has completely changed the dynamics of such a possibility. France will now have to reconsider their priorities and whether entering the Quad is in their best interests anymore.

France’s fallout with Australia and the US

The handling of the nuclear deal with France has been a failure of Australian diplomacy. Even during the two long years of negotiating the deal, Australia never seemed fully convinced about acquiring diesel electric submarines. The deal was already signed when Australia started talks with the US when it realised that it has to forego its agreement with France. Perhaps it wasn’t too late to inform them at that point itself. On the contrary, Australia waited till after the announcement of AUKUS to officially declare the scrapping of the French deal. A breach of contract along with a replacement of the deal by a military ally has made them feel ‘angered’ and ‘betrayed’ at the same time. This has compromised France’s bilateral relations with two out of the four Quad members. On one hand, there is Australia who has gone back on their commitment and on the other is the US.

In contrast to Australia and the US, France’s relations with the other two Quad members remain unharmed. AUKUS will in no way negatively impact their bilateral ties with India, who share a strong military and economic partnership with France. Similarly, Japan, who is one of France’s oldest diplomatic partners, will not be affected. In fact, this provides the remaining half of the Quad to further improve their respective bilateral cooperation with France. Also, Paris cannot let the submarine deal interfere with its interests in the Indo-Pacific. Therefore, while its breakout with the US and Australia might prevent it from immediately interacting with the Quad, pursuing bilateral means through India and Japan is strategically important for France.

Are the interests truly common?

Another factor of consideration for France is to evaluate the extent to which joining the Quad would help them achieve their goals. While France’s interests might overlap with the Quad and its members in some aspects, they are not congruent. Unlike the US and other Quad members, France’s interests do not lie in countering China but rather in promoting its own relations and footprint in the Indo-Pacific. Apart from India, the focus of Quad countries is largely limited to the East China Sea and the South China Sea region. For France, the Southern Indian Ocean and waters surrounding the African coastline are much more important due to the large presence of French territories there. France also has to account for the costs that come along with the benefits of joining the Quad. One of the consequences is upsetting China. France maintains reasonably better relations with China than any of the Quad members do. China is the largest exporter to France. Even though France has been openly critical of China’s expansionist behaviour, joining the Quad would set them off.

In the near future

The chances of France joining the Quad anytime soon are as good as none. Before even considering such a move, France needs to regain faith in the US and Australia. This requires extended efforts from all three countries and will need time to happen. Over the long run, there is a possibility that France could reconsider its entry into the Quad. Firstly, the recent deal snubbing France has created a sense of insecurity in them. If the Quad and various other groups keep cooperating extensively in the Indo-Pacific, it is possible that France joins the Quad as a way to prevent being left behind. Slowly and steadily, France’s relations with the countries will regain normalcy over time. However, if and when the nations will have enough confidence for France to join the Indo-Pacific group remains a question mark. One thing is for sure though, that the AUKUS deal has made the decision even tougher for France.

Dhruv Nilkanth
Author is an international relations student at the Jindal School of International Affairs. He has previously been a research assistant with the Centre for Middle East Studies at the O.P. Jindal Global University and a geopolitical risk intelligence intern at Mitkat Advisory Services. His areas of interest include the Middle East, Indo-Pacific and Europe.
Tags:
Share:
Share this...