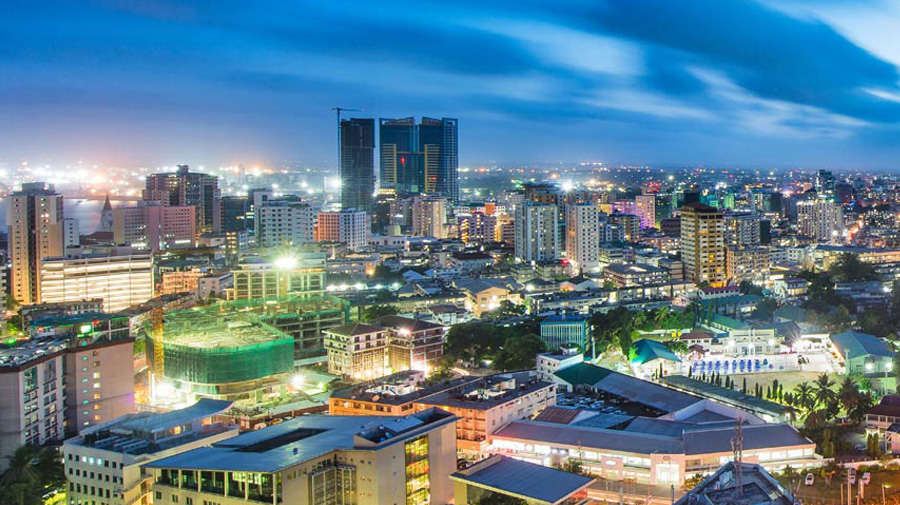 Tanzania, one of the most promising lands of East Africa, is the fastest growing economies in the continent. The country sustained relatively high economic growth at about 6-7 percent over the past decade (2010-2019) and reached a GDP of USD 55.5 billion, making it the second largest economy in East Africa after Kenya and the seventh largest in Sub-Saharan Africa. This growth has reduced poverty levels in the country, induced structural changes in the economy and also helped achieve productivity improvements. The share of agriculture to GDP declined during this phase while the share of industry and trade increased. The GNI per capita rose by 6.1% during 2010-2019, from USD 720 to USD 1,080. In 2019, Tanzania became a lower middle-income country with a GNI per capita of USD 1,080. However, due to the impact of the pandemic, the economic growth slowed down to 2.1% in 2020 from 6.8% in 2019. Consequently, the GDP growth of the country also witnessed a slowdown in recent years, from 7.7% in 2011 to 5.8% in 2019.

The Bank of Tanzania (BOT) released its Economic Bulletin (June 2021) revealing that in the quarter ending March 2021, the economy grew by 4.9% compared with 5.9% in the corresponding quarter in 2020. As per the bulletin, mining and quarrying recorded the highest growth of 10.2% attributed to an increase in the production of gold, coal and gypsum. The global economic slowdown due to the pandemic has adversely affected export-oriented industries, especially tourism and traditional export, and also caused a drop in foreign investment. Gold has been the sole export to benefit from the crisis, as international gold prices rose sharply between 2019 and 2020. The domestic economic activity has also been severely affected even though there are no stringent mobility restrictions imposed but the pandemic has prompted businesses and consumers to adopt extra precautionary behaviours. The decline in production, consumption and imports have significantly reduced fiscal revenue. On one hand, challenges in the financial sector such as the share of nonperforming loans have compounded and on the other, the growth of credit to private sector has slowed. The inflation rate in the economy, however, has remained stable. It is estimated that the current low and stable headline inflation is favoured by low domestic prices. Projections are that inflation will remain low, mainly because of the adequate food supply, anticipated low global oil prices and stability of the exchange rate.

According to the data released in the National Data of Tanzania Mainland (2013-2019) by the National Bureau Statistics, services made the highest share of GDP (40%), followed by Industry and Construction (31%) and Agriculture, Forestry and Fishing (28.9%). Tourism along with mining, construction, agriculture and manufacturing are the most notable sectors of the Tanzanian economy. In April 2021, the new President of Tanzania Samia Suluhu Hassan mentioned in her speech to the Parliament that the priority of the government in the next five years is to reach a GDP growth rate of at least 8% yearly. Looking at the economy slowdown caused by the pandemic, this growth rate looks unachievable.

The pandemic has crushed the tourism sector and created a need for assistance to confront the ongoing economic and health challenges. The International Monetary Fund (IMF) in September 2021 approved an emergency financial assistance of US$567.25 under the Rapid Credit Facility and Rapid Financing Instrument to support the efforts in addressing the urgent health, humanitarian and economic costs.

Despite the pandemic effect, the African Development Bank (AfDB) has projected Tanzania’s GDP growth to remain stable at 6.6% in 2021, subject to favourable weather, prudent fiscal management, mitigation of financial sector vulnerabilities and implementation of reforms to improve the business environment. The overall economic outlook remains uncertain yet somewhat positive, where the African Bank Development Group predicts the real GDP to grow 4.1% in 2021 and 5.8% in 2022, largely because of the improved performance of the tourism sector and reopening of the trade corridors. As per AfDB, spending on large infrastructure projects (mainly financed by external borrowing) and depressed revenue performance will widen the fiscal deficit to 3.2% of GDP in both 2021 and 2022. The major issues to the outlook include business regulatory bottlenecks that constrain private sector activity and uncertainties regarding the pandemic. Poverty and unemployment are expected to remain high due to depressed private sector activity.

In the World Bank Doing Business Report of 2020, Tanzania ranked 141st among 190 countries and ranked 4th in the East African Community (EAC) for the ease of doing business. The country is also currently implementing the “Blueprint for Regulatory Reforms to Improve the Business Environment in Tanzania” and aims to raise its score to at least 100. Tanzania is implementing reforms to improve the business environment in the country and private sector engagement is crucial for the economic development of the country. The private sector has been active in creating jobs, innovating, generating tax revenue and bringing a healthy competition to the market. A great percentage of youth is currently employed by private sector in Tanzania and moreover, market-based solutions have the potential to tackle societal challenges in the country. For Tanzania, the percentage of external debt in the total public debt also stands extremely high, as per AfDB, it accounts for 73% of the total. In a scenario where the pandemic is likely to increase vulnerabilities, maintaining debt sustainability will require innovative development financing options. Reducing the dependence on traditional financing instruments, Tanzania needs to unleash public-private partnerships (PPPs) which can effectively and efficiently mobilise additional sources of finance to fund infrastructure development in the country. The country has made considerable progress in the ICT sector and continued rapid expansion of the digital economy will support government’s response to the pandemic.

Tanzania has been one of the top growth performers in the region but as the impact of the pandemic continues to unfold, the government policy response needs to be well-targeted to mitigate the wide-ranging impact on economy and livelihoods.

Hema Narang
Author has recently completed her doctoral studies from the School of International Studies, Jawaharlal Nehru University. She has formerly been a visiting fellow with the Centre for Africa Studies, Harvard University and Harvard-Yenching Institute (CAS-HYI), 2019-20.
Tags:
Share:
Share this...