A Minute to Midnight 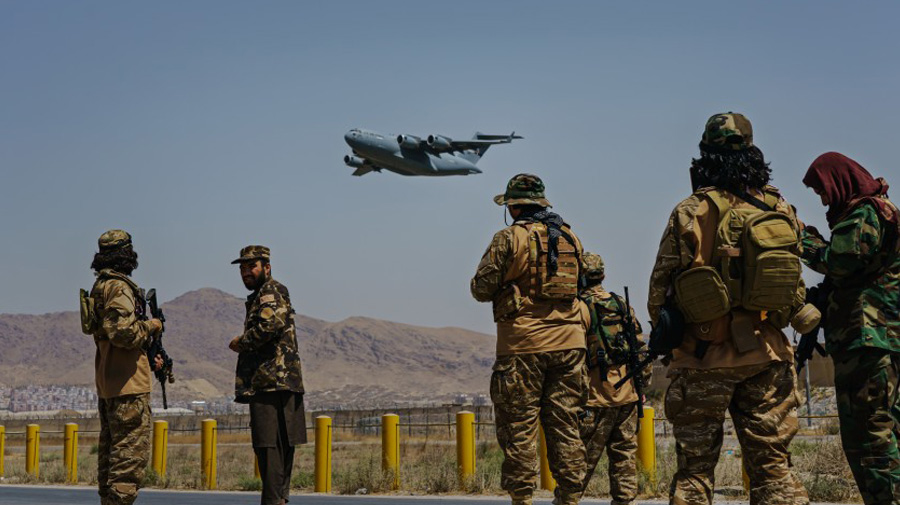 The last American soldier in Afghanistan boarded the C-17 cargo plane at the Hamid Karzai International Airport on August 30, 11:59 p.m. in Kabul, at minute to midnight, concluding America’s 20-year war in Afghanistan. Around the same time the United Nations Security Council under India’s presidency, adopted a resolution calling out the Taliban to facilitate safe passage for people wanting to leave Afghanistan, allow humanitarians to access the country, uphold human rights, including for women and children and ensure that the war-torn country not be used to threaten or attack any nation or shelter terrorists. Drafted by the United States, Britain and France, the resolution was passed with 13 votes in favor and no objections with China and Russia abstaining. The bulk international community is in fact waiting to see what the Taliban does next after making pledges of inclusivity and rights which appear to be part of a false public relations campaign. China, Russia, Iran, and Syria have expressed their willingness for dialogue with the Taliban.

Although President Joe Biden was committed to the withdrawal of troops from Afghanistan, the swift pace of the Taliban’s military advance appears to have completely surprised the US government. The US timetable for pulling out, and its security preparations for the evacuation of thousands of potential refugees were utterly disorganized.

When the US and Taliban struck the Doha agreement for, “Bringing Peace to Afghanistan between the Islamic Emirate of Afghanistan which is not recognized by the United States as a state and is known as the Taliban and the United States of America,” on February 29, 2020 it was tacit that the Taliban was being treated as a legitimate entity in any future political process. Despite the fact that the US administration, albeit former, initiated direct talks with the Taliban political leadership in Doha, excluding the Afghanistan government led by the then President Ashraf Ghani, America has not recognized the Taliban as the official government of Afghanistan. US Secretary of State Antony Blinken stated, “A future Afghan government that upholds the basic rights of its people and that doesn’t harbor terrorists is a government we can work with and recognize.”

As foreign governments debate over the extent of recognition and support that will be extended to the Taliban, the new government is poised to face huge challenges, with growing humanitarian and economic crises as funds are cut off by the US. With a severe drought sweeping through the country, there are questions about how the Taliban government will sustain itself without international aid. The Taliban meanwhile is doing what it knows best, fighting and seizing districts in the northern Panjshir Valley, the last remaining province in Afghanistan in which the Northern Alliance is holding out against the Islamist group. The Taliban are yet to set out the contours of their new Islamic government, but Mullah Abdul Ghani Baradar, Taliban co-founder, is being tipped to head a new administration

By the time the last U.S. plane took off from Kabul airport, the U.S. and its coalition partners had evacuated 124,334 civilians from Afghanistan, including almost 6,000 Americans. President Joe Biden described the rushed 18-day airlifted evacuation of more than 124,000 civilians, by the U.S as a “heroic” and “extraordinary success,” but many American officials regret leaving ordinary Afghans in the lurch as U.S. troops pulled out for the final time. It is feared that fewer than half of the at-risk Afghans have been evacuated. While the total number of at-risk Afghans who aided the American war effort is still unknown, Secretary Alejandro Mayorkas US Dept. of homeland security, which is now leading the evacuation effort said that some 50,000 Afghans are expected to be admitted into the United States.

Without the presence of U.S. troops, it is not easy for the remaining Americans and Afghans to leave Kabul. US officials are reportedly trying to get Hamid Karzai International Airport in Kabul, and other airports across Afghanistan, up and running again, as well as trying to secure “overland” routes so people can leave by car or foot. It remains to be seen whether any commercial airlines will be willing to provide service to Kabul once the airport reopens.

Western governments fear Afghanistan could again become a haven for extremists bent on attacking them. In the wake of the Taliban takeover, most Western countries are setting up embassies in the Gulf for their diplomatic relations with Afghanistan. Since the departure from Afghanistan, the US has said it will maintain an “over-the-horizon” capability to strike against any threats to its security in Afghanistan. Expressing doubts about the Taliban’s ability to consolidate power and establish effective governance, General Mark Milley, chairman of the Joint Chiefs of Staff said, “I think there’s at least a very good probability of a broader civil war and that will then, in turn, lead to conditions that could, in fact, lead to a reconstitution of Al-Qaeda or a growth of ISIS or other… terrorist groups.”

The Taliban’s total victory has major implications for the broader region. Most nations are concerned that the region would witness a resurgence of terrorism. For Pakistan which has been a key player in removing the elected Afghan government from power and establishing the Taliban as a decisive power in Afghanistan, it has been a strategic victory. Recently, a UN Monitoring report has said that a significant part of the leadership of Al-Qaida resides in the Afghanistan-Pakistan border region. Former Afghan vice president Amrullah Saleh has asserted that the Taliban are being micromanaged by Pakistan’s notorious intelligence agency–the ISI, adding that Islamabad is in-charge of the war-ravaged country effectively as a colonial power. “It is the Pakistanis who are in-charge as effectively a colonial power. But this is not going to last… They may have territorial control, but as our history has shown, control of land does not necessarily mean control over the people or stability,” Saleh, a vocal critic of Pakistan, Meanwhile Inter-Services Intelligence (ISI) director general Hameed arrived in Kabul to meet the Taliban along with a delegation of senior Pakistani officials.

While there may be many ‘whys and wherefores’ for pulling out of the ‘forever war,’ the retreat will be a symbol of defeat in its Global War on Terrorism. America entered Afghanistan with the sole purpose of battling the Taliban and their militant partners in Al Qaeda and the Haqqani network. That purpose still remains to be fulfilled. In these two decades, violent Islamic extremism has expanded exponentially; in Afghanistan, the Islamic State Khorasan, or ISIS-K represents a complicated dynamic amongst rival terrorist groups in the region. According to Ali Mohammad Ali, a former Afghan security official, “Afghanistan has now become the Las Vegas of the terrorists, of the radicals and of the extremists.”

Just hours after the last American soldier left Kabul, Al Qaeda’s senior leadership released a statement congratulating the Islamic Ummah on the occasion of the Taliban’s victory in Afghanistan. The brief message was distributed online by As Sahab, al Qaeda’s central media arm, in Arabic and English. In a newly-released video that was aired on Afghanistan’s national RTA television station, Taliban blames America for the 9/11 hijackings describing it as the true “terrorist” party, and blaming the US for the 20-year war. Less than two weeks after the country fell to the Taliban, Dr. Amin al Haq, the former security chief of Osama bin Laden’s Black Guard, triumphantly returned to his home in eastern Afghanistan from Pakistan where he was reportedly freed a decade ago. After America’s ill-planned exit from Afghanistan, criticism of US foreign policy has exploded across the world. Seizing on the ugly scenes at Kabul airport many have blasted America’s hasty withdrawal.

Since 2001 the most important component of America’s War on Terror has been a direct military intervention. But after the humiliating retreat from Afghanistan, US policymakers should ask if terrorism although a serious concern, represents a major security threat to the American homeland. In 20 years since 2001 over 2,400 Americans and 1,145 European allied soldiers have died in Afghanistan. Should the US abandon the use of military intervention and nation-building in the War on Terror? As South Asia comes to terms with the return of the Taliban, the US must closely review what happened in Afghanistan, including the evacuation, to see what lessons could be learned.