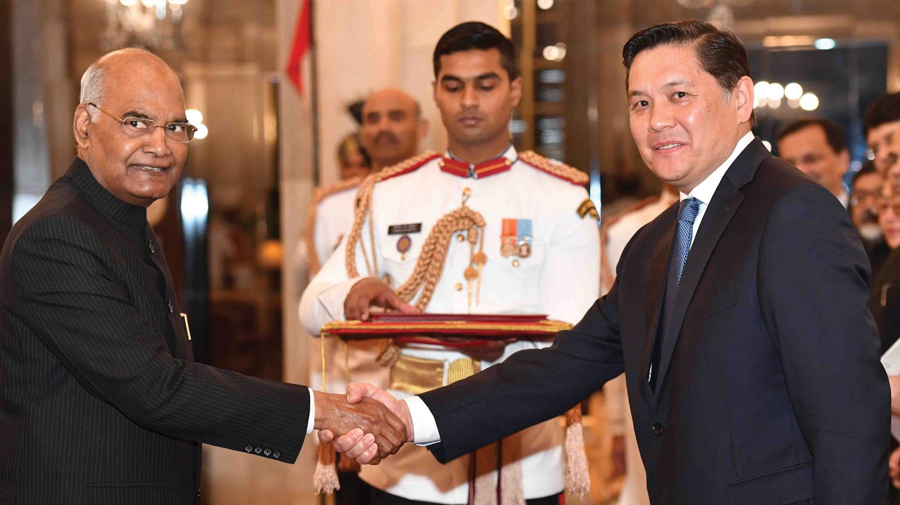 Strategic Partnership, Progressive Friendship and Equality Based on Sustainable Development and Mutual Trust

Our countries established diplomatic relations in 1992. In the same year, Kyrgyzstan opened its Embassy in Delhi, and in 1993, the Embassy of India opened in Bishkek.

The intensification and expansion of bilateral cooperation between the Kyrgyz Republic and India is one of the important directions of the foreign policy of Kyrgyzstan. Mutual understanding and similarity of positions on international and regional issues and problems, active political dialogue between Kyrgyzstan and India create favorable conditions for deepening and expanding the entire spectrum of cooperation between the two countries.

After gaining independence in 1991 Kyrgyzstan has begun its own way of development on principles of democracy with independent foreign policy. The corresponding democratic transformation took place in India much earlier. In this context, the Kyrgyz side, of course, is very interested in the positive experience of India as the largest democracy in the world.

Throughout the history of the establishment of diplomatic relations between the Kyrgyz Republic and the Republic of India, a number of mutual visits of the highest took place. The presidents of the Kyrgyz Republic visited India in 1992, 1999, 2002, 2003, 2016 and 2019. The prime ministers and vice-presidents of India visited Kyrgyzstan in 1995, 1996, 1999, 2015 and in 2019. During these visits, the foundations for the development of cooperation in the political, trade, economic, cultural and humanitarian fields were laid.

Indian Prime Minister Narendra Modi has visited Kyrgyzstan twice, in 2015 and in 2019. At the same time, the visit of Mr. Modi to Kyrgyzstan in 2019 can be considered as a new era in the development of bilateral partnership, since following the visit, the parties signed a declaration on the establishment of bilateral strategic partnership relations. It would be fair to note that raising the level of relations between our countries provides for new obligations to take effective measures to develop mutually beneficial cooperation in a practical plane and deepen mutual trust.

There are also additional platforms between our countries, within which Kyrgyzstan and India interact – these are meetings of intergovernmental commissions and consultations between the foreign ministries of the two countries, interaction within the framework of the Shanghai Cooperation Organization and other international structures.

Separately, I would like to touch upon cooperation in the trade and economic area, in which there is fertile ground for cooperation in the mining, pharmaceutical, IT, textile, education, hydropower, agricultural, industrial and tourism sectors. However, both sides are not making full use of the existing potential. The trade turnover between the countries is still has a great potential to raise, so in 2020 it amounted to only 48.4 million US dollars, of which exports from Kyrgyzstan to India – 6.7 million.

In this context, I would like to emphasize the words of the President of Kyrgyzstan, Mr. Sadyr Japarov: “A stable economy, open and transparent work of business structures, development of investment and entrepreneurial activities – in symbiosis, they are the key to a brighter future. I will protect and support every investor!”

In March 2019, I presented my Letters of Credence to the President of India Mr. Nath Ram Kovind and officially took up the duties of the Extraordinary and Plenipotentiary Ambassador of the Kyrgyz Republic in India. On that day, I remember very well the words of Mr. Nath Ram Kovind that relations between Kyrgyzstan and India are developing steadily, on the basis of historical and civilizational ties and are supported by common democratic values.

In turn, India is a very close-minded country for Kyrgyzstan, the two states and peoples have a lot in common, and at present, our countries invariably continue to follow the same development path, first of all, in the development and strengthening of democratic institutions. I would like to emphasize that I fully share the words of the President of India and note my readiness to make maximum efforts for further mutually beneficial cooperation.

Next year, Kyrgyzstan and India will celebrate the 30th anniversary of the establishment of diplomatic relations. In this regard, it is planned to hold a number of bilateral visits and events in the political, trade, economic, cultural and humanitarian spheres. Special attention will be paid to holding events within the framework of the cross-year of cultures, which has also been postponed by mutual agreement to 2022.

The development of cultural and humanitarian cooperation between Kyrgyzstan and India is one of the important areas of bilateral cooperation. Kyrgyzstan and India are connected by centuries-old history and culture, the long history of our cultural interaction testifies to the deep ties between the peoples of our countries, which are become stronger from year to year.

I would like to emphasize that Indian culture, Indian art, Indian history, Indian cuisine and Indian cinema are very popular among the Kyrgyz people. I can note that a whole generation of Kyrgyz people grew up watching Indian films. Representatives of the Kyrgyz Republic are happy to come to India to participate in various cultural festivals.

An important component in the field of cultural and humanitarian interaction is the education sector. About 13 thousand Indian students study at the universities of Kyrgyzstan. The priority area for Indian students is the medical field, namely, general medicine. In Kyrgyzstan, they not only study but simultaneously explore our country, our people, our traditions and culture, make friends and save good memories.  It is very pleasant for us to realize that graduates of Kyrgyz universities work in various medical clinics in many states of India. Taking into consideration the strong spiritual connection of our peoples, the development of public diplomacy, people to people contacts is one of the important pillars of bilateral relations between our countries.

Of course, Kyrgyzstan and India still have a lot to do to strengthen all areas of cooperation, but at the same time, I would like to note that our countries have an appropriate attitude, which, I am sure, will give the necessary impetus to deepening partnership.

H.E. Mr Asein Isaev
Author is Extraordinary and Plenipotentiary Ambassador of the Kyrgyz Republic in India
Tags:
Share:
Share this...