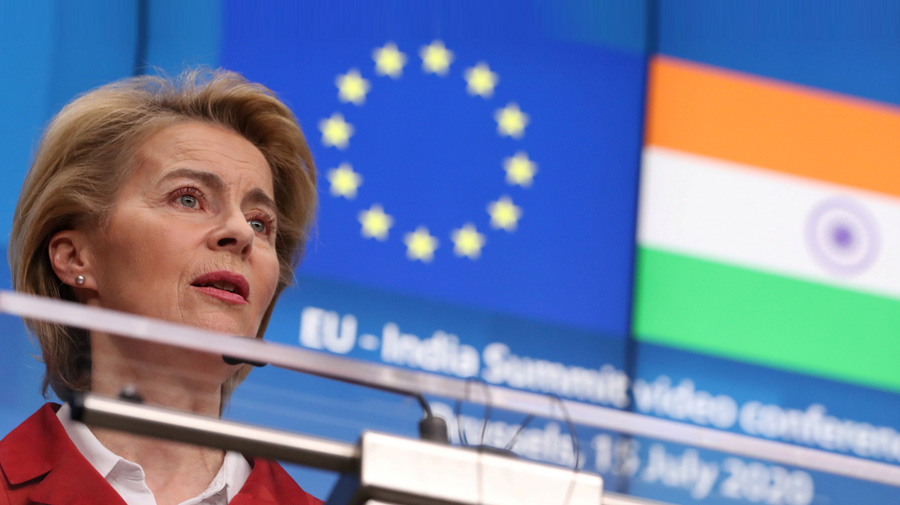 The 15th India-EU Summit provided a platform for the leaders of both the actors to agree and promote jointly a sustainable and viable rules-based approach to connectivity called the EU-India Connectivity Partnership. They affirmed their shared values of democracy, freedom, rule of law and respect for human rights that has been imbibed in their Strategic Partnership. Such a connectivity project makes the Union accessible not only to India but also to other regions such as Africa, Central Asia and the Indo-Pacific. It is India’s first such connectivity initiative with any foreign partner that will cover three geographic zones, much needed in an era of globalisation and increasing connectedness that aims to make borders across the globe porous. Needless to say, such an initiative is bound to have global ramifications which go beyond just India and the Union and is all set to provide an alternative to China’s mega Belt and Road Initiative (BRI).

China’s BRI often referred to as the New Silk Road, is one of the most ambitious infrastructure projects ever launched by Chinese President Xi Jinping in 2013 which includes a vast collection of development and investment initiatives aimed to stretch from East Asia to Europe with an aim to increase China’s economic and political influence. Although the partnership does not attempt to compete with the BRI, it is a clear-cut effort to block China from creating a multitude of inroads in the three continents towards Beijing. Leading journalist and editor Indrani Bagchi argue that a ‘globally connected Europe’ is an answer to China’s Border Road Initiative. While trying to impede Chinese investments, the connectivity project also tries to gain an upper hand by emphasising the environment and sustainable development. It would not only open up new possibilities in India and Europe but also enable digital world connectivity, achieve energy security and establish people-to-people contact by creating assets and capacities in the adjoining regions.

The BRI, being an integral factor of China’s charm offensive has pushed certain countries into a debt trap. The US and EU have previously accused China of setting up expensive projects which the host country is often not able to afford, subsequently resulting in the country’s debt-servicing problems. For instance, the Chinese have taken parts of Sri Lanka’s Hambantota port on a 99-year lease. Similarly, tiny Montenegro in Central Europe took a huge loan from China to build a highway and is now trying to obtain a loan from the EU to repay it. Further, in Pakistan, several highways and industrial parks are also being built under the China-Pakistan Economic Corridor (CPEC) agreements. These China-backed power projects have received financial backing from Chinese banks at huge interest rates. While on one hand, China continues to pursue its hyper-nationalistic debt trap diplomacy, on the other hand, diplomats argue that the new India-EU partners would ensure that their projects do not impose a heavy debt burden, like the Chinese ones.

This initiative comes at a time when superpowers such as the US seek to stimulate similar efforts to counter China’s influence. US President Joe Biden’s proposal to Boris Johnson, UK prime minister, for democratic nations to set up an infrastructure effort to rival the BRI also backs his thought of pushing the EU to take a tougher stand against China. Historically viewing Europe-China relations indicate numerous instances when the EU and China have found themselves at loggerheads. Moreover, in recent years, in particular, the EU has not only been apprehensive of the Chinese provocation of European countries pushing them towards adopting a ‘One-China’ policy with no exception but also of China’s assault on Hong Kong’s independence as well as China’s assertion of a wolf warrior diplomacy across its foreign policy. For instance, the Union had signed the EU-China Comprehensive Agreement on Investments (CAI) in December 2020 but that has now run into headwinds due to European sanctions imposed in response to China’s conduct and denial of human rights towards Tibet and Uyghurs, along with forced labour issues.

China can be said to be antithetical to what today’s Europe stands for. To a certain extent, the EU-China relationship has been an example of a transactional relationship that completely lacks a shared vision and a common goal. The European ideals of liberal democracy, human rights, persuasion over coercion for resolving conflicts, etc. don’t find any takers in China. Thus, although the EU’s goal to increase connectivity and accessibility across the globe does not directly attempt to compete with the OBOR projects, it underlines their perception of China as a systemic rival promoting alternative models of governance. The future of the connectivity partnership will now depend upon how strongly can the Union and India showcase their diplomatic and economic assertiveness with an attempt to globally counter China.

Shreya Sinha
Shreya Sinha is a Doctoral Candidate at the Centre for European Studies, School of International Studies, Jawaharlal Nehru University. She holds her M.Phil. and MA degrees from the same school at JNU. She holds her Bachelor's degree in Political Science and History disciplines from St. Stephen's College, Delhi University. She has also been awarded the Junior Research Fellowship in Political Science by the University Grants Commission. Her interest areas include Defense and Security Policy of the European Union, Non-Traditional Security Studies, Energy Security and Transatlantic Security Partnership. She can be reached at https://www.linkedin.com/in/shreya-sinha-5b22611a6/
Tags:
Share:
Share this...