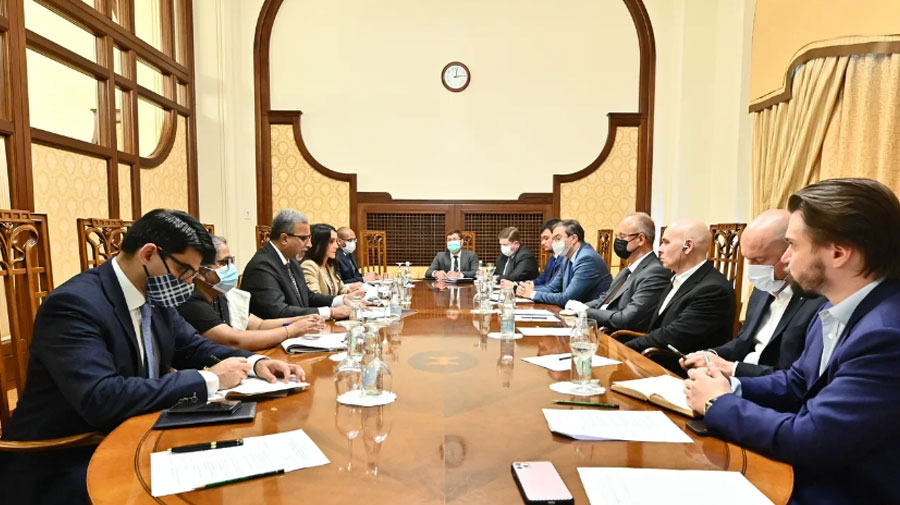 On August 6, adviser to the Russian President and Executive Secretary of the Eastern Economic Forum Organizing Committee Anton Kobyakov held a meeting in Moscow with Ambassador Extraordinary and Plenipotentiary of the Republic of India to the Russian Federation D. B. Venkatesh Varma during which they discussed possible formats for India’s participation in the EEF 2021 and SPIEF 2022, the members of the Indian delegation, business programme events, and agreements that the countries may sign.

“The traditionally friendly Russian-Indian ties have steadily strengthened over the last few decades. In recent years, they have attained the level of a particularly privileged strategic partnership that represents a unique format of interstate interaction. We consider it very important to expand cooperation in the Eurasian Economic Community space and also continue the dialogue on the North-South international transport corridor project whose implementation will significantly expand our trade opportunities,” Kobyakov said.

He also pointed out that the 6th Eastern Economic Forum will be the second major international event held after SPIEF in 2021 and that it will be held in a hybrid format. Kobyakov said this will not affect the productivity of the event since it is expected to be attended by prominent guests and feature fruitful discussions given the importance of the themes in the business programme. In addition, he said ensuring sanitary and epidemiological safety during the Forum is a top priority.

“The Indian delegation is ready to contribute to the business programme of the Eastern Economic Forum. We are interested in organizing a Russia–India–Japan trilateral meeting as well as meetings at the level of the federal ministers of Russia and India. We also look forward to expanding Russian-Indian business contacts at the regional level. For example, business representatives of the state of Gujarat WEF were invited to the Republic of Sakha (Yakutia) as part of the EEF to secure agreements in the diamond industry and pharmaceuticals that were reached at the Forum in 2019. Given the closed borders, participation in the EEF opens a window of opportunity for the realization of joint business interests,” D. B. Venkatesh Varma said.

In addition, they discussed the Russia–India business dialogue that is part of the Forum’s business programme. The event is scheduled to be held in person, but a hybrid format may also be used with the help of an organized studio in New Delhi.

The officials discussed prolonging a cooperation agreement at the EEF 2021 with one of Russia’s key partners in India – the Invest India National Investment Promotion and Facilitation Agency.

The Eastern Economic Forum is held annually with the objective of facilitating the accelerated development of the Russian Far East’s economy and expanding international cooperation in the Asia-Pacific region in accordance with the Executive order of the President of the Russian Federation No. 250 of 19 May 2015.

The 2021 Eastern Economic Forum will be held in Vladivostok from 2–4 September. Far Eastern Federal University’s (FEFU) campus on Russkiy Ostrov will serve as the forum’s venue. The Official EEF Site: www.forumvostok.ru/en

The Roscongress Foundation is a socially oriented non-financial development institution and a major organizer of international conventions; exhibitions; and business, public, sporting, and cultural events. It was established in pursuance of a decision by the President of the Russian Federation.

The Foundation was established in 2007 with the aim of facilitating the development of Russia’s economic potential, promoting its national interests, and strengthening the country’s image. One of the roles of the Foundation is to comprehensively evaluate, analyse, and cover issues on the Russian and global economic agendas. It also offers administrative services, provides promotional support for business projects and attracting investment, and helps foster social entrepreneurship and charitable initiatives.

Each year, the Foundation’s events draw participants from 208 countries and territories, with more than 15,000 media representatives working on-site at Roscongress’ various venues. The Foundation benefits from analytical and professional expertise provided by 5000 people working in Russia and abroad. In addition, it works in close cooperation with 155 economic partners; industrialists’ and entrepreneurs’ unions; and financial, trade, and business associations from 75 countries worldwide.