Britain in the Making of the Israel-Palestine Crisis 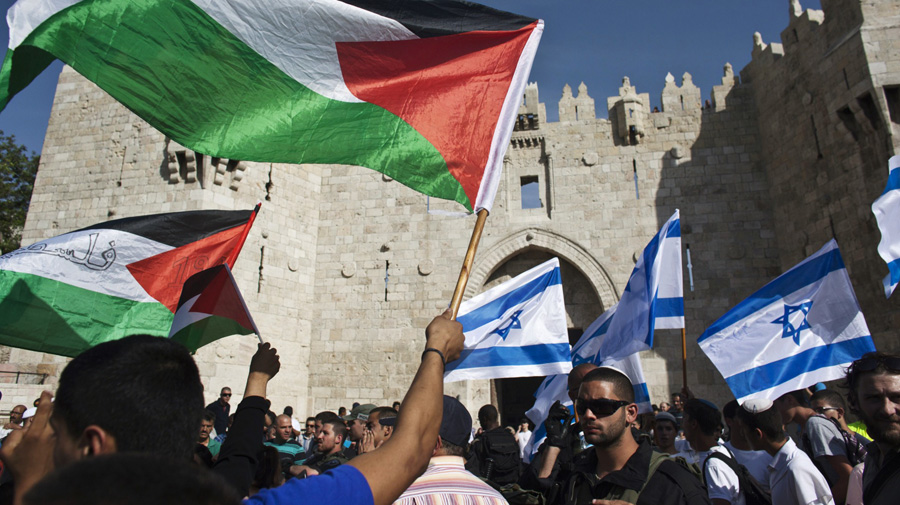 Contrary to popular belief, the notion of a Jewish homeland had been initiated much before the extermination of the community by Nazi Germany. The inception of the Israel-Palestine conflict, as it stands today, is attributable to the colonial ambitions of Britain and the domestic political concerns which shaped most of Britain’s actions on the global front. During his speech at the Oxford Centre for Islamic Studies on May 21st 2009, the British foreign secretary David Miliband in a rare confession noted “the failure- it has to be not just our-to establish two states in Palestine”(https://bit.ly).

Sir Mark Sykes, a British Diplomat made a very wise statement for British colonial policy – he said “All we have to do is not to mix ourselves up with religious squabbles” ( File: Sykes-Picot negotiations 1915). Had Britain followed this advice, the world wouldn’t have witnessed two of the most conflicted partitions and violent on-going rivalries – that of India-Pakistan and Israel-Palestine.

Present-day Palestine was under the Ottoman Turks before the First World War. The War led to the creation of six new states – Lebanon, Turkey, Syria, Transjordan, Palestine and Iraq. Except for Turkey, which was secured by the Ottoman military commanders, the rest came under Anglo-French domination. This division of the former Ottoman Empire’s Arab provinces subsequently laid the foundation for the perpetual instability and political turmoil in the area.

During the war, the allies needed the support of Hussein Bin Ali, the Sharif of Mecca to defeat the Ottoman Turks. According to most sources, this negotiation was done in 1915 through a series of letters exchanged between the Sharif and the then British High Commissioner of Egypt, Sir Henry McMahon. The British asked for assistance in the war in return for a promise that “England will acknowledge the independence of the Arab countries”. (Mcmohan-Hussein correspondence).

However British imperialism has been marked with actions that forwarded the British interest at the cost of its colonies. There was no clear demarcation of the boundaries between the states after the fall of the Ottoman Empire. The unilateral promises made by Britain to the Sharif were not appreciated by its French allies. Hence, on one hand, while Mcmohan-Hussein correspondence was ongoing, the British and French negotiations for dividing the spoils of the unfinished war had begun. This exchange between Mark Sykes, a British diplomat and Francois Georges-Picot, a French diplomat, drew lines on the Middle Eastern land according to the needs and interests of the Imperialists with little consideration for the ethno-religious concerns of the region. The Sykes-Picot Agreement (1916) divided the land among the English and the French while declaring Palestine as an international zone due to its religious significance (The agreement). This agreement blatantly violated the British promise to the Sharif. The Western colonial masters have often used natives as pawns to meet selfish goals while they breached their end of agreements. Another example, around the same time, was when the Indians contributed to the British war effort and in return witnessed the brutal Jallianwala Bagh Massacre of April 1919.

Initiation of the two-nation theory

Soon after the agreement, the British recalibrated their interest in Palestine for its strategic value of being a buffer to the Suez Canal. It was during these calculations that the leading members of the British Jewish community convinced them that their political Zionist interests in Palestine were in alignment with the English political ambitions. The lobbying resulted in what is known as the inception of the two-nation theory – the Balfour Declaration. A letter from the British foreign secretary Lord Balfour to a prominent member of the British Jewish community, Walter Rothschild, declared for the first time the support of a Great Western Power for the creation of a Jewish homeland in Palestine (Balfour Declaration). The text also declared that nothing shall be done which may prejudice the civil and religious rights of the existing non-Jewish communities in Palestine.

By the end of 1917 and while the war was still raging, the British has made tall promises to several parties- they had promised an independent Arab nation to the Sharif, agreed to share a part of the Arab province with their French allies and had openly favoured the creation of a Jewish homeland in the the-now-clearly-demarcated state of Palestine. None of these agreements was made public immediately and hence each of these parties believed that the British were earnestly supportive of their respective causes.

Meanwhile, for the British, control on Palestine to secure military communication routes with the east was gaining currency which was a region of hard-earned Britain colonies, won in battle with other prominent European imperialists. This made it imperative to keep the French out of Palestine for France was a tough contender for power across the globe then. With the Balfour Declaration Britain had tactically won the confidence of powerful Jewish lobbyists of the West- especially Chaim Weizmann, the president of the British Zionist Organisation- who now favoured British rule in Palestine in return for a Zionist homeland at Jerusalem. That coupled with the carefully worded Balfour Declaration, which with the promise for the protection of the native Arabs had struck a delicate balance between the interests of the two communities which held major stakes in Jerusalem. Unsurprisingly, this earned the British “a Mandate for Palestine” which was approved by the League of Nations in 1922.

The British occupied Palestine from 1917 to 1948- an era which transformed the demography of what was known as Palestine. On its ruins stand Israel, what is left of Palestine and a brutally contested Holy land of Jerusalem. The mandate period was marked by large-scale immigration of Jews, acquisition of land from the Arabs and massive discontent among the occupants in its entirety.

The making of the current turmoil

The crisis began soon after with the Nebi-Musa Riots of 1920 and the Jaffa Riots of 1921. After the grant of the mandate, it was the British responsibility to resolve the violent conflicts for which purpose several committees were constituted (a classic British drill for crisis intervention). The Report of Commission on the Palestine Disturbances 1929 stated “the Arab feel animosity and hostility towards Jews consequent upon the disappointment of their political and national aspirations and fear for their economic future”(https://bit.ly). This pointed to the impracticality of Jewish immigration into a flooded labour market which however did not change the British pro-Zionist stand. The British seemed to have conveniently turned a blind eye to the promise of protection of the Palestinian Arab interests, violating one-half of the Declaration.

The most violent clash of 1936 led to The Palestine Royal Commission Report(1937) which recommended an end to the mandate and a two-state solution (The report). However, the British inability to recommend boundaries to enable a relatively civil partition led to their retraction and subsequent reversal of plans wherein they committed to the independence of Palestine essentially halting the making of the Zionist Homeland (McDonald White Paper 1939).This desperate attempt to remedy the disastrous effects of their actions made them violate the Declaration entirely. The Zionists, now with greater numerical strength and wider global influence, fought the British military and installations in Palestine while continuing to facilitate illegal immigration- an act termed as Jewish terrorism by the British (as is often reiterated in the current times).

By this time the Second World War had begun and with the discovery of the holocaust arose a new-found sympathy for the Jewish cause. Anti-Semitism gained traction on a battle-cry footing and consequently, the Zionist ambition found powerful International allies like the U.S.

After a chronicle of bloody battles, ethnic cleansing(Naqba, according to the Arabs), war and devastation, Israel was born in 1948 and millions of native Palestinians were rendered homeless and stateless. The war for a clearly demarcated home for the Palestinian Arabs and Israel’s vehement protection of its hard-earned Homeland continues to make this an especially disturbed and distraught region. Several factors assisted in the culmination of the current crisis but the British, with their boundless ambitions and political ploys, have played a significant role in particularly turbulent partitions in the modern world- Israel-Palestine is no exception.

Tanya Vatsa
Author has BA/LLB(Hons.) from National Law University, Lucknow, India; Currently a Gandhi Fellow with one and a half years of experience as an assistant advocate; has previously published articles on foreign affairs in the International policy digest and the Kootneeti.
Tags:
Share:
Share this...