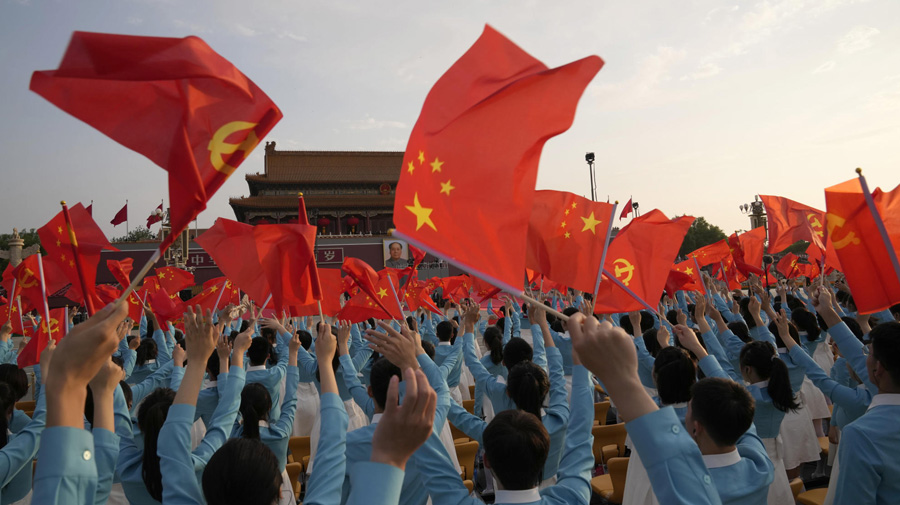 As the Chinese Communist Party (CCP) celebrates 100 years of its formation on first July 2021, it is worth looking at where the current CCP leadership is headed given its profound implications for the world.

This article briefly looks at Chinese President Xi Jinping’s efforts towards centralization of power within the party, a trend that is reminiscent of Mao’s era. Further, it examines the possibility of an imminent political crisis within the party leadership. The article concludes by suggesting a likely transformative change in the top CCP leadership in event of a crisis.

Xi Jinping assumed the leadership of the party and the military at the 18th Party Congress in 2012 when he took over as General Secretary of the CCP and the Chairman of Central Military Commission (CMC), the apex military body that oversees the People’s Liberation Army (PLA). In March 2013 he assumed the presidency of PRC, thus completing the succession process.

However, soon after ascending to power, Xi launched an anti-corruption campaign in 2013 aimed at weakening and eliminating the two most dominant factions that ruled the CCP then – the Shanghai faction and the Chinese Communist Youth League (CCYL) faction. Both the factions had been dominating the elite politics in China for more than two decades and had agreed on an informal power-sharing arrangement to alternate the position of General Secretary (along with Presidency and Chairman of CMC) between themselves to avoid any succession crisis and infighting that had marred the post-Mao era. Jiang Zemin of the Shanghai faction inherited power in 1989 and his successor Hu Jintao of the CCYL faction assumed party leadership and presidency in 2002. Xi succeeded Hu as part of this power-sharing compromise as he belonged to the Shanghai faction in 2012.

After purging his rivals and opponents mainly on charges of corruption, Xi appointed his trusted loyalists and old-time friends to key party and government positions such as Central Committee, Governorship, and Provincial Party Secretary. These positions were key to secure an entry into the Politburo and eventually the Politburo Standing Committee (PSC) of the CCP – the seat of ultimate power in China.  Niel Thomas in his study noted that “approximately 60% of the 19th Politburo have direct ties to Xi, up from around 20% in the 18th Politburo.”

Further, just months before the 19th Party Congress, when Xi was about to begin his second term, he got rid of Sun Zhengcai, his potential successor, on charges of corruption. Interestingly, it had been a party convention to appoint a successor before the beginning of the second term of the incumbent President. Hu Chinchua, another potential successor of Xi failed to win a membership to Politburo at the 19th Party Congress thus putting him out of contention for succession.

Once assured of requisite support in the PSC, Politburo and Central Committee, Xi began to undo the limited political reforms that had evolved after years of struggle. First, he went against the party convention by not appointing his successor at the 19th Party Congress. In the same year, he amended a 1980 document from the Deng era relegating the principle of ‘collective leadership’ that had become the central characteristic feature of the CCP leadership.

In 2018, he abolished the two-term limit on the presidency that the PRC Constitution placed on the incumbent leader – a reform that was introduced by Deng Xiaoping in 1982. In the same year, Article two of the Chinese Communist Party Disciplinary Regulations was amended to provide for the two safeguards: “to resolutely preserving General Secretary Xi Jinping’s status as the core of the Party Central Committee and the core of the entire Party and to resolutely preserving the authority and unified leadership of the Party Central Committee.”

But power does not necessarily translate into authority unless people view it as legitimate. The anti-corruption drive had lent some legitimacy to Xi’s autocratic rule. But it was the successful handling of the pandemic and recovery from the impending economic crisis in record time that soared Xi’s domestic popularity and legitimacy multiple times. The state-controlled media ensured that people took note of it. Xi capitalized on the hyper-nationalist sentiments arising out of events leading up to the Hong Kong protests and its attempted integration, reclamation of Taiwan and commemorating PLA’s heroics in Galwan against the Indian army. Aggressive posturing against the U.S., Japan, EU and Australia has also helped in evoking popular support.

Consolidation of power followed by its legitimisation has helped Xi to ‘personalise’ his rule & become the autocrat that Mao was. These evolving trends make him appear formidable and invincible. Observers believe that Xi has cleared his way to hold on to power till at least 2032 or even further given he is only 68 years of age.

However, McGregor and Blanchette have noted in their paper that Xi’s power-hungry actions may push CCP towards a succession crisis. Xi has sought to destroy the principle of ‘collective leadership’, de-institutionalise the bi-factional party system and scrap the informal power-sharing arrangement, all that had evolved after years of infighting and had together imparted a degree of stability to CCP elite leadership and certainty to the succession process.

Mao had centralised power during his reign and kept altering his preferred successors. He held on to power till his death in 1976. The result was that his death triggered a series of succession crises that continued till 1989. Leadership travelled from the Gang of Four to Hua Guofeng and then to Deng Xiaoping in 1980 in quick succession. Later, in 1987, in a remarkable turn of events, Hu Yaobang, CCP’s General Secretary and Deng’s protégé, was removed from his position midway through his tenure because of his pro-reform attitude. Again in 1989, Zhou Ziang, another of Deng’s protégé and chosen successor, was reprimanded for his alleged role in Tiananmen Square protests of 1989 & removed from the position of General Secretary of CCP.

It is worth noting that in each of these instances after Mao’s death, a rival faction had a hand in removing the incumbent leader. It was under these circumstances that ‘collective leadership’ and ‘bi-factional party system’ evolved and institutionalized as the characteristic feature of CCP’s elite politics to avoid any political infighting and succession crisis in the future.

The CCP had to wait for more than five decades (53 years) since the establishment of the PRC to witness its first-ever orderly succession when power transferred from Jiang Zemin to Hu Jintao in 2002. However, even on this occasion succession process wasn’t completely smooth as Jiang Zemin held on to the chairmanship of CMC for two more years till 2004 before vacating it. Besides, Hu Jintao could never come out of Zemin’s influence entirely during his ten-year reign. In 2012, the transfer of power from Hu to Xi Jinping was thus truly the first-ever orderly and smooth succession process.

Thus, Xi’s attempts at repressing factional politics – an inevitable consequence of CCP’s party structure and functioning – may push the CCP into another crisis. Factionalism within the CCP has had a long history even before the 1990s when the Shanghai and CCYL factions came into being. The dominant factions in the past being the Gang of Four in 1976, Deng’s immortal eight, and the Conservatives & Reformists during 1980-89.

If CCP’s history serves any precedent, the rival factions while may be weakened and lying dormant, aren’t dead. The party leadership is in for political turmoil given the uncertainty over the succession process. Whether the crisis would occur during Xi’s reign or after he steps down is debatable but a turmoil resulting in a transformative change in the CCP leadership is highly probable.

The promise to deliver on economic growth fuels CCP’s political legitimacy and failure to keep the promise will dent the party’s claim to absolute leadership. There have already been several concerns regarding China’s economic slowdown. China’s aggressive foreign policy has further exacerbated the problem. The world has begun to see China’s rise as a concern. With its wolf warrior diplomacy, China has managed to irritate its major trading partners and investors such as Japan, the U.S., the EU, Canada, Australia, and even India. Taiwan and Hongkong which have been leading investors in the Chinese economy haven’t been spared either. It threatens to push China into partial isolation ending its near-monopoly over manufacturing, global supply chain and critical technology. The recently concluded Quad and G7 meet (Australia, India, South Africa and South Korea participated as special invitees) have sought to counter Chinese dominance in investments, supply chain, critical technology by promising to put in place alternative arrangements.

The above developments point towards an evolving crisis and failure to deliver on the economic front which may further be accentuated by the CCP’s fallout with its private enterprises, that have so far played a majority role in driving China’s growth, may just be the spark needed to allow the political tension brewing within the CCP to manifest itself out in the open, as it did during the build-up to the 1989 Tiananmen protests, especially when factional politics within the CCP has had an economic undertone (differences over economic policies and preferences) to it throughout its history. A possible crisis that appears probable will lead the party elite into a phase of reconfiguration and rebalancing based on a new set of bargains similar to what evolved in the post-Mao era.