Morocco, Spain and the Instrumentalisation of Migration 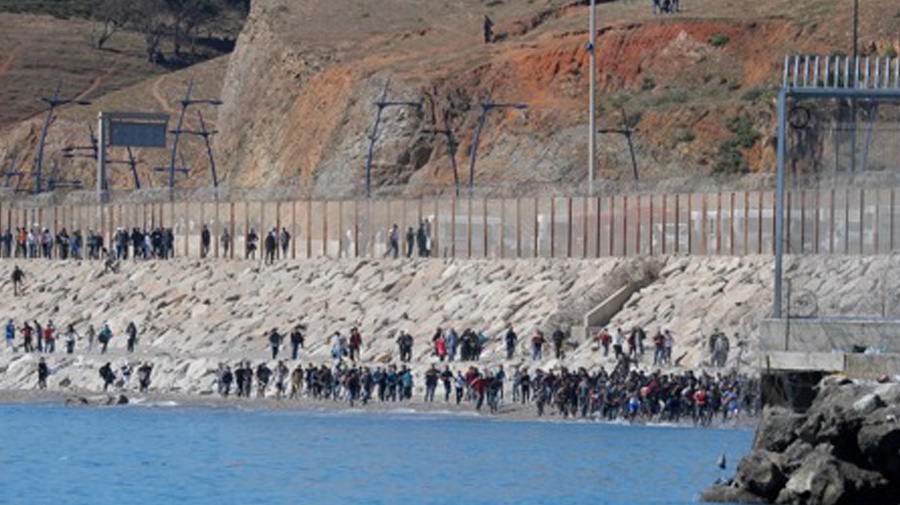 Amidst an ongoing diplomatic row between Morocco and Spain, Ceuta, one of the two Spanish enclaves on the Northern coast of Africa, saw a dramatic influx of migrants from Morocco. An unprecedented surge of thousands of unauthorised migrants crossed the border from Morocco to Ceuta in less than 48 hours.

The influx coincides with heightened tensions following Spain’s decision to allow the leader of the Polisario Front in Western Sahara, which is a disputed territory claimed by Morocco and the indigenous Sahrawi people, to seek medical treatment in Spain in April 2021.

According to reports, Moroccan authorities patrolling the border on the 17th of May demonstrated an unusual laissez-faire attitude towards border control leading to desperate migrants, including children, enter Ceuta in an irregular manner. More than half of the migrants, who crossed the border, predominantly Moroccans, were returned to Morocco.

Reacting to the situation in Ceuta, the European Commission President Ursula von der Leyen expressed the blocs’ solidarity with Spain and emphasised the need for “common EU (European Union) solutions to migration management.”

All in all, Ceuta’s migration crisis has deepened the diplomatic spat between the two nations and drawn attention to the fundamental shortcomings in the EU’s migration policy.

The Genesis of the Migration Crisis

For years, the border fence at Ceuta and Melilla has been a focal point of discussion for irregular immigration from Morocco and sub-Saharan Africa to Europe. Often referred to as Africa’s gateway to Europe, the two Spanish enclaves are perhaps the only land borders that separate Europe and Africa.

While the highly controversial border barriers in these enclaves may have reduced the number of migrants over time, they still haven’t eliminated the problem of irregular migration. Every year, thousands of migrants, either fleeing turmoil or seeking a better life, attempt to reach Europe through these two coastal towns. Around 2,200 migrants irregularly entered these enclaves from Morocco last year.

The current migrant crisis at Ceuta was triggered by the recent political developments in Western Sahara, a former colony of Spain annexed by Morocco in 1975. Since the outset, Western Sahara has been a source of conflict between Morocco and the pro-independence Polisario Front. The three-decade-old truce was disrupted last November when tensions renewed in the region after Morocco launched a military operation to clear a blockade by protestors in an UN-monitored buffer zone of Western Sahara. In addition, under the Trump administration, the US agreed to recognise Moroccan sovereignty over Western Sahara in return for the normalisation of Israel-Moroccan diplomatic ties.

Against this background, Spain’s decision of receiving Brahim Ghali, the leader of the Algeria-backed Polisario Front, with fake travel documents, did not go down well with Rabat, which warned Spain of “consequences”. Morocco’s relaxation of border control in Ceuta and Melilla came in retaliation for this move, leveraging migration to coerce Spain into supporting its claim over Western Saharan.

The current spat has dipped the bilateral relations between the two countries to an all-time low. Although it is not the first time that Morocco has used migration to pursue its interests, this time around, Morocco has decided to be open about its actions and seems adamant about pressuring Spain to comply with its demands.

Ghali’s treatment may have been a humanitarian act for Spain, but through Moroccan lenses it is a deliberate political act undermining its integrity in Western Sahara. Given the geopolitical issues at stake, it is in both countries’ best interest to preventing the situation from worsening and finding measures to reignite bilateral relations. A lot also depends upon the US foreign policy as the support garnered during the Trump administration has most evidently given a boost to Moroccan confidence over the Western Sahara matter.

The Ceuta crisis is another manifestation of migrants’ vulnerability, as they get played as convenient pawns in a big political game. Human rights groups have criticised Spain for using excessive force on migrants.

Lack of adequate legal protection and no legal pathways into Europe continue to characterise the predicament of these migrants. The rapid expulsion of migrants that included some unaccompanied minors means that they had been denied the right to seek asylum under international law.

Amongst those who remained, most were left stranded on the streets. Unaccompanied minors were put in deplorable, overcrowded warehouses at a time when pandemic necessitates proper hygiene and social distancing measures a must. Thus, the crisis demonstrates that the EU is still a long way from having a comprehensive and compassionate framework in place to deal with huge groups of migrants entering illegally on its shores.

The repercussions have been felt in the political arena of Spain, with immigration being pushed back on the agenda in the Spanish political discourse.

In recent years, the far-right xenophobic Vox party has gained traction in Spanish national politics. Vox politicians were quick in calling the arrival of immigrants “an invasion” and have warned to withdraw its support from the regional government if it were to grant asylum to these immigrants.

In an attempt to offset Vox’s populism, there is also a possibility that centre-right Partido Popular may take an anti-immigrant stance for the next national election. Sans doubt, the crisis is one of the toughest challenges faced by the Socialist government of Spain.

What does it mean for Europe?

For the EU, the crisis has once again raised questions about its policy of heavily depending upon third countries to control irregular migration into the bloc. Trusting undemocratic and unstable political regimes are bound to have consequences on the continent, as seen earlier in Turkey’s border conflict with Greece and Libya’s clashes with Italy.

With von der Leyen emphasising the importance of forging deeper ties through agreement on the New Pact on Migration, it appears that externalisation will continue to be the EU’s preferred policy path. In doing so, the bloc must not drift away from its normative values and international human rights standards that call for migrants’ rights to be given precedence over achieving efficiency in border management and migration control.

The contemporary nature of international politics frequently reveals that no issue affects simply a part of the globe. Arguably, the finest example is migration.

A migratory crisis between Spain and Morocco is also a European-African dilemma that requires answers from all involved. The EU’s role as a facilitator is important in encouraging dialogues and cooperation to resolve the diplomatic feud between Spain and Morocco. As a multilateral actor, it cannot remain a bystander as the Western Sahara problem wreaks havoc on the region, causing fresh schisms and divisions.

More importantly, the EU should revaluate its externalisation policy and strive towards building a more humane mechanism to deal with migration. It must be borne in mind that a crisis such as this will be immediately exploited by far-right populist parties, resulting in an increase in Euroscepticism and political radicalism.

Gatha Nautiyal
Author is a researcher based out of Bangalore, India. She holds a PhD in European Studies from Jawaharlal Nehru University, India. Her thesis focuses on Moroccan immigration in Spain and her main research interests include international migration, causes of migration and socio-political effects of migration.
Tags:
Share:
Share this...