Rohingyas: A Security Threat or A Matter of Human Rights violation? 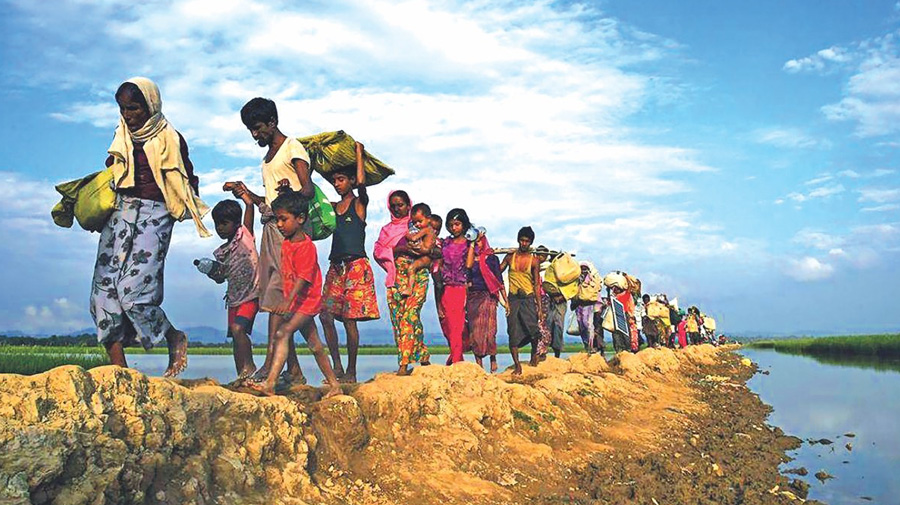 An upshot that has come to be known as ‘the Rohingya crisis’ is a mishap that was in the making for over several decades and derails the precarious situation of thousands of people belonging to the Rohingya-Muslim minority community in Myanmar’s Rakhine State. Myanmar does not decipher the community as its citizens and ruminates that they are “Illegal immigrants” from Bangladesh. The vehemence in Rakhine State has budged several thousands of Rohingyas within Myanmar and driven out some of them to neighbouring Bangladesh after the military launched a sanguineous crackdown actuated by militant attacks on security posts in late August 2017. The United Nations (UN) has described the ardor against the Rohingya community as a “textbook example of ethnic cleansing.” Antonio Guterres, the United Nations Secretary General, said that “The grievances and unresolved precarious situation of the Rohingya have festered for far too long and are becoming an undeniable factor in regional destabilisation“. The crisis has acquired a security dimension with perturbations being raised over the wriggle of Islamic extremism amongst the Rohingyas, who have grown increasingly forlorn over their precarious situation.

Rohingyas used to live in the Rakhine state. Rohingya is an ethnic Muslim minority in the Rakhine state of Myanmar. It is a Sunni Muslim community. The Rakhine state was a part of THE Arakan Kingdom. The kingdom from 1429 to 1785 ruled over what is now Rakhine State, Myanmar and Chittagong Division, Bangladesh. From 1429 to 1531 it was a protectorate of the Bengal Sultanate at different time periods. After gaining independence from Bengal, it thrived with help from the Portuguese settlement in Chittagong. In 1666, it lost control of Chittagong after a war with the Mughal Empire. Its reign continued until the 18th century when it fell to the invasion of the Burmese Empire. The Rohingya community has been—a Buddhist majority country in Myanmar—for centuries. Later on, Burma was governed by colonial rule as a part of British India. Myanmar was known as Burma under British colonial rule (from 1824-1948) and during this colonial period, Rohingyas had to face the curse i.e. slavery. There was significant migration between today’s Myanmar, India, and Bangladesh. Once Burma won independence in 1945, the government passed the Union Citizenship Act, which detailed the ethnicities “indigenous” to Myanmar. The Rohingya were not considered to be one of the country’s 135 official ethnic groups. Rohingyas arrived in the Rakhine state of Myanmar during the 19th and early 20th century. The Myanmar government disavowed their historical claims and denied the group recognition as one of the 135 ethnic groups.

Here, we will focus on two aspects. First, the Human rights violations and abuses. Second, the International response towards this crisis.

The Human Rights violations and abuses

In the first part, the human rights violations and abuses are worsening in Myanmar. This crisis has given way to massive human rights violations and Humanitarian crisis. The Armed conflict between the military and the Rohingya Muslim minority has intensified, forcing several hundred thousand to flee to Bangladesh and other places. Over 800,000 Rohingyas fled Myanmar between 2016 and 2017 as the military waged a genocidal campaign, veiled as a counterinsurgency,  against the civilian population. The UN fact-finding mission determined that the military’s actions in Shan and Kachin states since 2011 amounted to genocide, war crimes against humanity.

In the case of repatriation of the Rohingyas population, the legal conditions for repatriation seem to be far from acceptable in the framework of the agreement signed between Bangladesh and Myanmar. Particularly, Rohingyas deeply despised the flawed process of the National verification card (NVC). Considering they view it as a perpetuation of the discriminatory 1982 citizenship law which has effectively left them stateless in their own country. They are facing restrictions on every aspect such as marriages, family planning, employment,  education, religious choice and freedom of movement. They require permission for everything.

Secondly, In this human rights violations aspect, the major concern is the violence against Muslim women and girls, denied by the Myanmar government. Rohingya women and girls have been victims, in recent decades, of THE grave and repugnant violence committed by the security forces in Myanmar. Arrests, torture, rape, widespread killings, forced labour and other severe abuses are resulting in waves of mass displacement.

The massive refugee outflow has spawned a serious humanitarian crisis that entails implications on regional stability and security. Nearly all neighbouring countries of Myanmar are only seeing this crisis or issue through security lenses. But the affected community requires a lot of attention in terms of their stable place to live.

We came across various types of international responses. Well in the case of India, various factors have framed India’s stance. India took the side of the Myanmar government because it was derailed that raising the issue publicly might jostle Myanmar towards China as it was building relations with the then newly formed quasi-democratic government. India also has economic concerns with its companies holding stakes in the Shwe Gas field off the coast of Rakhine State. Despite energy interests and focus on building cross-border pipelines, India wants to connect its landlocked northeastern region with the Bay of Bengal through Rakhine State under a joint project with Myanmar that immures development of the port at Sittwe, inland-waterway in the Kaladan River, and road construction to conjoin it with India’s Northeast. India was chary that instability in the Rakhine State would have baneful effects on these concerns. With increasing security cooperation between the two countries, particularly in tackling cross-border ethnic insurgency in their shared border regions, India was careful not to upset the Myanmar regime. India’s offer of relief assistance was a gesture of abetment to the Myanmar government as much as it was about its humanitarian concerns in a neighbouring country. Thus, geopolitics, security and economic interests and humanitarian concerns were key in moulding India’s Rohingya response. Apart from geopolitics, humanitarian concerns and non-interference in internal affairs, two other factors appeared to have driven the Indian approach—the growing security concerns and the need for diplomatic balancing between Bangladesh and Myanmar. Bangladesh authorities have claimed that at least 14 criminal groups are active in the Rohingya refugee camps of which some are reportedly linked to the Arakan Rohingya Salvation Army (ARSA). The most active ARSA faction is locally known as the Hakim Bahini (Hakim group named after Abdul Hakim, a Rohingya refugee from Maungdaw, Rakhine state). As we see the interference of Al-Qaeda, Al-Qaeda is exploiting the Rohingya crisis by framing it within an Islamic eschatological narrative known as ‘Ghazwatul Hind’. Ghazwa is an Arabic word that means battle, and Al-Hind generally denotes the Indian Subcontinent/South Asian region, which roughly encompasses Pakistan, India, Bangladesh, Nepal, Bhutan, Sri Lanka, Maldives, and, to some extent, the Rakhine state of western Myanmar (aka Arakan). The concept of ‘Ghazwatul Hind’ is premised primarily on three hadiths (Prophetic Sayings) which refer to the Indian subcontinent. The sayings glorify the status of those who will participate in the battle which has been described as the ‘Ghazwatul Hind.’ For example, on 13 April 2019, one of Al Qaeda’s media production houses “Ummah Network” uploaded a YouTube video message by its Bengali ideologue Shaikh Tamim Al Adnani. The 25-minute-long video titled “Ghazwa-e-Hind is knocking your door” purported Arakan as part of a global crisis facing the Muslim community. The video further prodded Muslims to rise against “quisling ” forces against Islam in the Muslim regions conceived to be under attack.

Now, in the case of China, it continues to shield Myanmar from accountability and scrutiny, obstructing international action and weakening UN measures. China expanded its investment in the country. They had signed an agreement on the China-Myanmar Economic Corridor, a development project under China’s “One Belt, One Road” initiative linking Hunan province to the Indian Ocean.

In the case of Japan, attempting to compete with China for influence, Japan broke with other democracies and called for the international Community to avoid Criticizing the Myanmar government.

Although various countries condemn the actions of the Myanmar government towards Rohingyas. For instance, the Gambian government filed a lawsuit against Myanmar for genocide at the International Court of Justice (ICJ). But, at a court hearing on provisional measures in December 2019, a delegation led by Aung San Suu Kyi rejected accusations that the country had breached the obligations under the Genocide Convention.

Finally, some countries are seeing this crisis as a security threat to them. Some are seeing this issue as a matter of the violation of human rights of Rohingyas. But there are no proper homes for Rohingya refugees. No country is ready to accept it because of various so-called “security threats”. This worsens their livelihood day by day. A few months back, around January 2020, a government appointed panel established in Myanmar to probe allegations of abuses in the Rakhine state in 2017 that drew global outrage said that they had found no evidence of genocide against the Rohingyas Muslim minority. The panel blamed Rohingya militants for attacking 30 police posts and “provoking” crackdown. A Rohingya leader, Dil Mohammed, described the report as a whitewash. So, in this whole game of what is right or what is wrong, powerless people are so much affected. This crisis requires an urgent well-established solution.