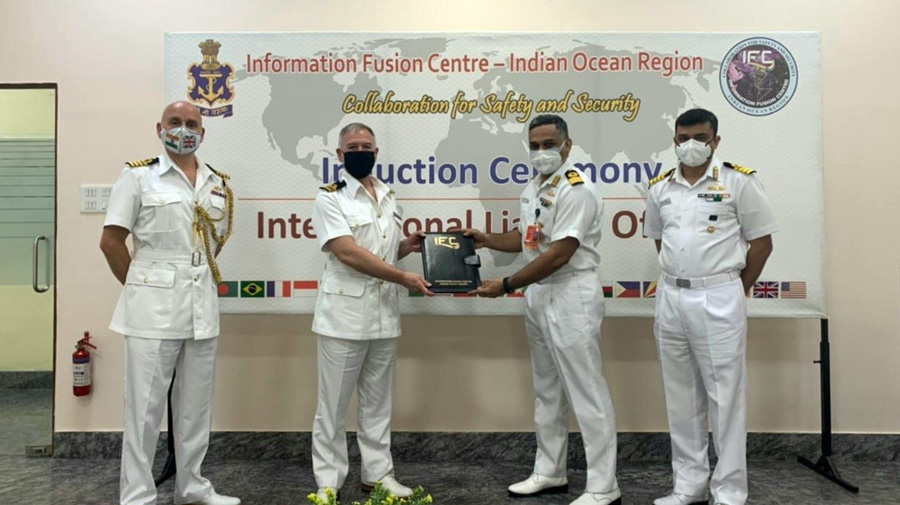 Lieutenant Commander Stephen Smith will be based full-time at the Centre, working directly with the Indian Armed Forces and fellow liaison officers from partner nations to enhance maritime domain awareness in the region. He will be inducted in an official ceremony as the UK’s first ILO at the Centre, building on the UK and Indian Prime Ministers’ historic commitment to boost cooperation with the launch of the 2030 Roadmap in May.

The UK is world renowned for its maritime awareness capability, leading on anti-piracy in the western Indian Ocean region and contributing over £20 million to tackle the problem. The UK’s White Shipping Agreement with India, for example, enables information sharing across the whole of the Indian Ocean Region. Working closely with the Maritime Trade Information Centre in the UK, the ILO will bring this specialist maritime trade operations knowledge to the IFC-IOR.

Admiral Tony Radakin KCB ADC, First Sea Lord and Chief of Naval Staff, said: “I am delighted to see Lt Cdr Stephen Smith join the international team at the Indian Navy’s Information Fusion Centre-Indian Ocean Region as the first ever UK Liaison Officer. I wish him and his new team every success and am excited at the opportunities this position brings us for closer UK-India collaboration and information sharing. Coming as a natural outgrowth of the strong partnership between the Royal Navy and Indian Navy, this is a significant step up in our shared maritime domain awareness effort, and boldly underlines UK and Indian desires to work together in the Indian Ocean Region and wider Indo-Pacific.”

Jan Thompson, Acting British High Commissioner to India, said: “The UK has committed to becoming the European country with the broadest, most integrated presence in the Indo-Pacific in support of trade, shared security and values. I am delighted that we’ve taken another tangible step to enhance our joint capability to tackle shared challenges.”

Gavin Thompson, Defence Adviser at the British High Commission, said: “The IFC-IOR is an excellent platform to enable closer engagement and ensure greater sharing of information on vessels of interest. The UK and Indian armed forces already enjoy high levels of interoperability, which will be on full display during the upcoming visit of the UK’s Carrier Strike Group, led by one of our largest aircraft carriers – HMS Queen Elizabeth. The appointment of the UK Liaison Officer forms part of our enhanced maritime partnership to bolster security in the Indian Ocean.”