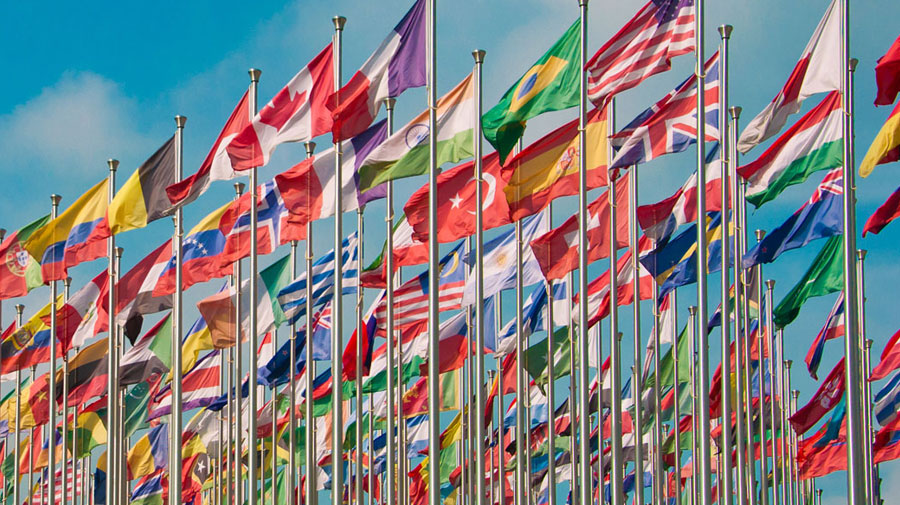 The esprit de global is in vogue in the Post-War World Order since 1945. The bipolar power politics and two blocism or aligned front continued as the Cold War from 1917 October Revolution in Russia to its Soviet Coalition till 1991. George Orwell coined this term bloc rivalry, ‘the Cold War’ that was between the Western Democratic countries led by the US and the Communist countries led by the Soviet Union and its secondment of the People’s Republic of China. A New Cold war was also witnessed in a conflict-ridden global theatre from 1979 to 1985. Meanwhile, world affairs were in transformation and in continued transition.

Since the 1980s Liberalization Policy was enacted in many countries of the world to give impetus to their political economy when they focused just on politics without adequate measures to improve towards robust health of the economy. Then Mikhail Gorbachev introduced reforms in politics and economy based on the norms and values espoused by Russia’s adversaries in the West in his official pronouncements in 1987. Great power rivalry ended on 3 December 1989 at Malta Summit during the meeting of Mikhail Gorbachev and Ronald Reagan. Meanwhile, there were determinants that were imperative to herald the German Unification in 1990.

This set the world tones into a liberal world order as the ultimate march of history and time. From 1991 to 2001, International Relations were in an interregnum when a unipolar moment and proclamation of a New World Order began to see challenges of the globalizing sphere of international affairs. Its complexity was intruding on the mindscape of national affairs. A New Global Order is said to have been evolved when politics got competitive, and economics and finance were relatively dependent and interdependent against an autarkic or independent étatisme or statism. In the years ahead, a deepening momentum of connection is going to increase further when the Non-West aspires to the quality of life, government and governance when they try to emulate the West.

The Eastern European countries started to intermingle with the prosperous and developed Western Hemisphere and in its connection to the immediate neighborhood of the Western borders in the developing phenomena of world affairs. A successor to the Soviet coalition, the Commonwealth of Independent States on 21 December 1991 was forged and the Soviet Union was officially dissolved the same year on 26 December. Strategic anxiety and arms pressures were somewhat lessened and contained. But their territorial sovereignty was endangered when insecurity heightened with Moscow’s revisionist posture in the erstwhile republics. There is a coercive and hegemonic mentality in Russia’s relations with its once strategic sphere of influence. This compelled those countries to join the EU and NATO system to get protection from a security dilemma and economic support.

Currently, the global challenges are to be responded to in policy meetings at the global conclave. Group Seven, an exclusive club of rich nations, spearheads global public policy. The Non-West expects the inclusion of their needs and demands that are unmet in terms of accessing global public goods and addressing their economic disparity. A disadvantageous situation prevails in their political economy and human security that needs to be mitigated in the coming decades. However, global trends are not in their suitably conducive policy praxis to achieve welfare, social security, and multiple challenges to sustainable development. There are a multitude of problems and threats the Non-West alone cannot manage and alleviate. CORONA Pandemic is a disastrous episode that befell them and vulnerabilities of climate change have worsened much.

Cornwall Summit of G7 in England in 2021 convened to respond to COVID 19-Pandemic and Climate Change that has worldwide ramifications in direct and indirect ways to normalize everyday affairs in the states of the world without exceptions to this elite ensemble. British Prime Minister Boris Johnson particularly called for measures to curb global public health threats concertedly in the future. He pushed approaches to mitigate the challenges of pandemic and extended support with all means to the rest of the world rolling out 1 Billion vaccine doses so that the sensitivity of jabbing a large number of populations who are devoid of access to it is held on time. South Africa stressed revamping the WHO to grapple with this problem.

Boris Johnson called for climate change control ahead of the COP26 meeting in November in the UK. A step up climate action has to pursue green economy, green finance, and carbon emission taxing, and phasing out fossil fuel consumption. The G7 pledged to net-zero carbon emissions by 2050. Another field of focus of this summit is on coordinated international economic policies that assist in speedy financial and economic recovery and its uniformity. Corporate taxation of multinational corporations was negotiated to reform the tax base to curb money laundering and its haven for no tax exemptions in the host state’s economy. America is also reviewing to support Pound 500 billion to IMF to Special Drawing Rights to member countries when the Trump Administration was hesitant. G7 pledged to Build Back a Better World initiative to build infrastructure in the least and middle-income countries where it is in dire need. They support regulating digital currencies. The G7 called for peace in Taiwan’s cross-strait relations. They supported Japan’s hosting of mega sporting events of the Olympics and Paralympics this year.

A precursor policy position to this summit is a joint statement of G7 and EU issues to show concern over the erosion of the democratic system in Hong Kong in mainland China changing electoral processes that restrict freedom, liberty and civil rights. A continuous annexation of the Crimea region by Russia was also condemned. America’s readmission to the spirit of international cooperation in the Paris Climate Agreement was welcomed. China in the case of Hong Kong, Taiwan, Xinjiang, COVID origins, and other matters related to its affairs raised in the Cornwall gathering of G7 was responded to by China’s filing complaints to their false accusations, meddling statements, and blatant lies in the summitry communications. Whereas China’s threat theory was rejected by the Foreign Affairs Ministry of PRC, a systemic threat was articulated to the rise of China by G7.

Multipolar and multilateral world order and global events were proceeding to shape a world in reorder. It is certainly unfolding After the Coronavirus (AC) that plagued the world. It is succeeded by two other important conclaves to manage the imminent diplomatic and security issues, threat and anxiety – the NATO summit in Brussels, Belgium, and the US-Russia Presidential Meetings in a neutral diplomatic venue Geneva in Switzerland.

The strategic agenda tops these international meetings and prospects of rebalancing hard power politics. This is a defining moment in diplomacy in the aftermath of Trump’s withdrawal from liberal international order and American democrats vow to re-engage America’s commitment to world affairs by returning to high tables where engagement is the norm and universal values steered by America’s leadership and example. This can salvage the ruins of principles and ideas of Biden’s predecessor Trump policy position that ought to be repaired in the international mosaic of emerging worldviews.

In the Brussels Summit Communiqué issued by the Heads of State and Government participating in the meeting of the North Atlantic Council in Brussels on 14 June 2021, NATO outlined three core tasks of collective defense, crisis management and cooperative security. It remains an indivisible concern of member states in this defensive mechanism to ensure the Trans Atlantic Euro-American sphere of influence. NATO 2030 transatlantic agenda complements this purpose. Cybersecurity, climate change, and threats from authoritarian regimes pose challenges to an open and democratic society. The next strategic concept would be formulated and support an effective, clear and convincing strategic communication. Strategic conversations are becoming stringent if this may not be a trend to the technocratic and authoritarian regime in discourse in foreign and security policy.

For more than 25 years NATO-Russia Council has been in operation but it depends on Russia’s vow to the Western-led rules-based international order and security approach. It called on the Russians to abrogate designating the Czech Republic and the US as unfriendly countries. A deterrence and defense concept with NATO’s military edge over a hybrid threat of disinformation campaign, ICT use, military and non-conventional threats of state and non-state actors, and against its potential adversaries of liberty and democracy principles that define Western governing supremacy. It acknowledges threats to international peace and security in the conflict-ridden Middle East and North Africa and other theatres of the African Continent, Eastern European countries, China’s defense capability, and Russian military build-up and intrusions in its erstwhile theatre of influence.

After this Transatlantic Security congregation, the American President touched down in Geneva to have a rendezvous with the Russian President Vladimir Putin since his assumption of the White House. American Presidents expressed heated allegations and curt exchanges with Russian President Putin, a diplomatic business as usual, in international power politics. America’s accusations and pressure build-up embolden Russia to further the authoritarian traits of its historical legacy. America shows the concern of Russian dissidents of Putin and NATO’s concerns of its Russian strategic incursions. Although the ice-breaking meeting may allay fears of the military showdown, confidence-building measures in diplomacy are infinitesimal to contain saber-rattling rhetoric each display on the globalized media.

Trump’s apprehension of Russia’s electoral tampering issue in the Finnish capital Helsinki on 16 July, 2018 was stated with no breaching actions from Putin. Trump’s wake-up call was ditched. Biden was certain that bilateral relations do not digress into annihilating conflict. Putin met five serving American Presidents and he expressed concern over NATO expansion to its peripheral zones, democratic promotion to the Russian dissidents, and doublespeak in Iraq, Syria, and other internal conflicts. Ukraine coming into American orbiting influence was a serious note Putin takes on. This Geneva Summit achieved some concrete results to normalize diplomatic relations with ambassadors of both countries returning to take charge of the diplomatic mission in each other’s capital. The START III nuclear treaty expires in 2024 and cyber-security issues will be initiated in consultations of the State Department and the Russian foreign ministry.

It is said that two former marines of the US army were sentenced to long jail terms in Moscow on dubious charges and exchanging with dissimilar cases of a drug peddling Russian citizens in the US. In response to quelling oppositional movements of the Russian youth, Putin raised the issue of Capitol Hill storming of Trump supporters in January 2021 and urged America to respond to their demands. The US Congress labels Russia as an enemy as an unfair attitude and treatment. Putin’s art of timing is surprising when he goes to meet state persons in a late arrival but this time in Geneva he was ahead of Biden’s entry, according to media reports.

An international era that is uncommon and unparallel has been a curtain-raiser. A global focus is on heavyweights of international relations, and global optics getting wider attention on the media – social, academic, and public intellectual circle. The issues were tall and politicians were not small. Meeting item coverage mainly was the world’s daunting challenge to alleviate climate change, security, and health challenges. In this matter of its response from the West and impending problems emanating from the Non-West, global issues need global solutions. And global public policy is affecting conduct and perception in the post-western world order. Only at this hour, interdependence and globalization of politics, economics, and security are surfacing in the high tables, and like in history, they need diplomatic acumen, conduct, and prowess to resolve the burning and buzzing issues with clear mindsets in international relations. 2021 is the year that is slowly emerging from CORONA Pandemic onset, and vaccinating the global citizens may take a year or two, and waves of the pandemic spike have to be restrained with appropriate public health measures. A scope of great power relations summitry shapes the world that will be in reordering balance of power politics supplemented by economic well-being.