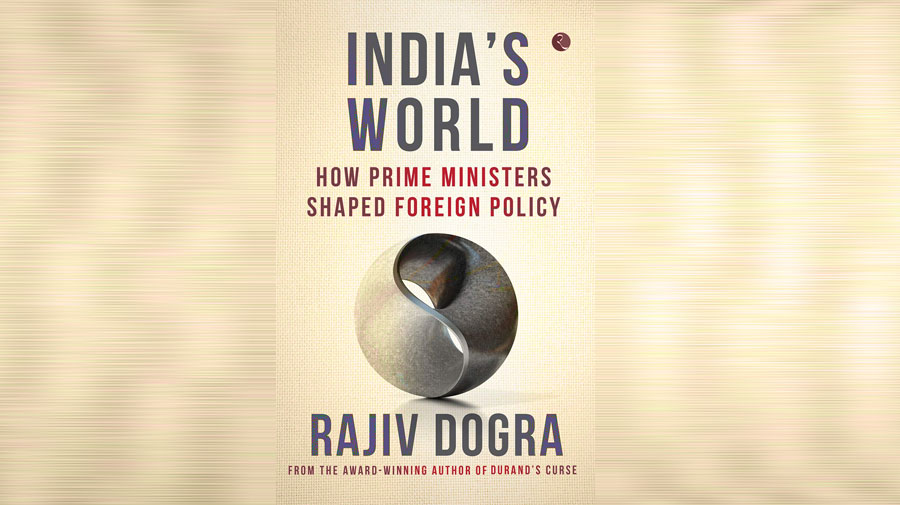 A diplomatic account can be of two kinds. One is an autobiographical account where the author narrates groundbreaking incidents involving him/her in their diplomatic career. The second kind is India’s World that adopts a fact-based, research-grounded, story-telling narrative of a country’s foreign policy and diplomatic history.

Published in 2020, the book came out at a time when India is stepping up its game to play a greater role in the world. It aims to assess the term of eight Prime Ministers on three accounts — ensuring the country’s security, strengthening its unity and democracy and giving India enough leverage to play a major role in global institutions and practices. The theme of the book is an important one, given India’s consistent rise in the diplomatic world and its ambitions of being a great power.

It begins with a short, crisp and relevant prologue that sets the stage for India’s path in the world from the past to the present. It is divided into eight chapters focusing on eight different prime ministers, in chronological order. One significant event dominates the trajectory of these men and women, as the judgment dawns upon by the citizens of the country. Apart from personal notes or comments exchanged by the stalwarts, Dogra introduces the readers to the world of civil servants —advisors, secretaries, ambassadors— who played an important role during the crisis faced by the leaders of the country. This makes the book more than just an assessment of prime ministers, rich with diplomatic accounts and decision-making carried out by Indian officers within and beyond India.

The first Prime Minister to be put under the litmus test is the most beloved and detested Indian, both at the same time, Pandit Jawaharlal Nehru. The dominating themes under his years of nation-building revolve from India as the leader in Global South to a humiliating defeat at the hands of the Chinese. As the reader progresses, one is drawn towards the subtlety and greatness of Shastri.

Dogra’s Indira Gandhi is a bold strategist, transformative genius, ruthless political leader with a legacy of contradictions. Her account is marred with the politics of the Nixon-Kissinger duo and their mutual dislike for our first woman prime minister. Her principle aid, P.N. Haksar’s account on various occasions gives an insight into how India in the aftermath of the 1971 Liberation war held its ground and position in the world amidst the threat of Pakistan-US-China nexus. A recent article published in The Hindu mentions about the ‘dominance of diplomatic families’ since independence that includes the Haksars.

Rajiv Gandhi’s term is described as a mixed bag. The author comments how this young man’s push for modernization and diplomatic success in Maldives and China could not compensate for his misadventure in Sri Lanka. Calling his brand of diplomacy “aspirational” and “arrogant”, Dogra considers him a “reluctant politician” who was outwitted by veterans.

Calling Narasimha Rao a real Chanakya, Dogra reminds the often forgotten truth that it was Rao who had done the groundwork for India’s second nuclear test and forwarded the legacy to his successor Vajpayee after losing elections to his party.

The rest of the book puts down the vast, complex and dynamic history of the two decades into 80 pages. He lauds Manmohan’s brilliance in striking a nuclear deal with US amid domestic chaos across the party and Modi’s embrace for traditional summit diplomacy and maintaining personal ties with world leaders. The epilogue is a continuation of challenges faced by Modi amid a rising China, a nightmare of Pakistan, a promising United States and reluctant allies like Iran and Russia. He encourages translating the curiosity of citizens, scholars, bureaucrats and politicians into a collective vision of India’s place in the world. Often quoting the wise old man of Asia, Lee Kuan Yew throughout the book, Dogra concludes his thoughts on India’s future with Yew’s advice that “India has to solve its economic and social problems before it can play a major role in Southeast Asia”.

Often the professional performance of any Prime Minister is recorded by how successful were they to bridge Indo-US ties and bring the two states closer. This western notion of the need for American recognition and acceptance, defined as a benchmark or yardstick for success is reflected in some parts of the book but the author manages to bring India’s neighbourhood into the picture.

One intelligent observation that the author makes and can be summed up as the premise of the book is how Indian foreign policy in its future, like its past, will be in the “hands of few”. There are some prime ministers that do not find a mention in Dogra’s account including the ones of the period between 1989 and 1991. Perhaps, the excluded leaders could not set an agenda and give a direction to foreign policy due to domestic political turmoil. However, there is an exception. Prime Minister I.K. Gujral’s period, short but an important one for India’s external affairs is missing. It seems as though Dogra fell in his own trap by sharing the narrative of a few powerful long-term leaders, setting aside gains made by others.

Dogra does try to tread the rocky path by addressing some controversial moments in the history of Indian foreign policy. Some of them include — first, an account of Nehru’s epitome of non-alignment moment leading to a rejection of the UN Security Council seat; second, Indira Gandhi’s falter at Shimla conference and refusal to launch an offensive after a stellar victory against West Pakistan; third, a critique of Vajpayee’s assessment of Kargil attack and his hesitations at Agra summit; fourth, infamous 4-point Musharraf formula that Manmohan Singh seemed ready to sign.

The writing style of the author is clear and consistent with the skill of grasping the reader’s attention with a hook. The readability is maintained throughout. It is recommended for college students as an introductory read to understand the basic history of Indian foreign policy throughout time. For early scholars and researchers, this bare, honest and reflective account of the veteran diplomat can be supplemented with others for further research on India’s vibrant diplomatic accolades.

Apoorva Jain
Author is a graduate in political science from Delhi University and is currently pursuing her masters in International Studies from Jawaharlal Nehru University.
Tags:
Share:
Share this...