United States Troops Withdrawal From Afghanistan And Its Implications 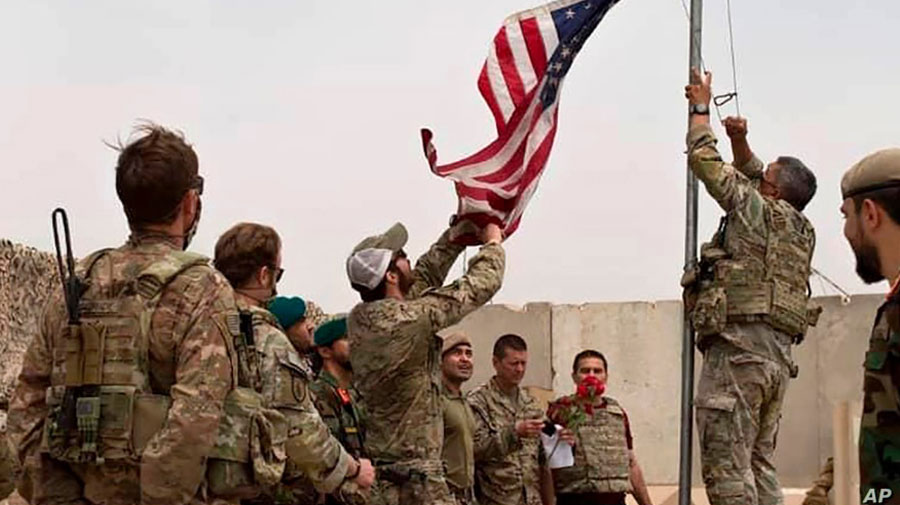 The current war began when the Bush administration invaded Afghanistan a few weeks after 9/11. Osama bin Laden carried out a planned invasion of the United States on Afghan soil. The Taliban had given refuge to Osama bin Laden and his supporters when they ruled large parts of Afghanistan.

Two months after the US-led invasion, the Taliban regime and the group’s defenses collapsed, and the United States formed a new government of Afghans fighting the Taliban. The United States retained limited troops to fight and capture al-Qaeda and Taliban leaders and invested little in the Afghan economy and society. It took the Taliban four years to regroup and mobilize an effective insurgent force to fight the Americans and the Afghan government, a group that has grown stronger since 2004. Since 2001, the US-led coalition has spent $ 1 trillion in Afghanistan, pledging to mobilize 140,000 troops and 100,000 contractors in a failed attempt to defeat the Taliban. The Taliban are expanding their territory and killing hundreds of Afghan soldiers every month, feeling that they are on the verge of victory. Militias from different ethnic groups in the country have taken up arms, fearing that the Kabul regime will collapse and another civil war with the Taliban will break out if Afghanistan is on the verge of ending the game.

US military presence in Afghanistan

October 2001: Just one month after 9/11, US bombers appear over Taliban positions in Afghanistan, launching an airstrike.

December 2009: Barack Obama decides to send another 30,000 troops to increase the number of US troops on Afghan soil to 100,000. At the same time, he spoke about the beginning of the withdrawal plan of these forces in 2011.

October 2014: The United States and Britain announced the end of their military operations in Afghanistan.

March 2015: Barack Obama said he is delaying the withdrawal of US troops at the request of Afghan President Mohammad Ashraf Ghani.

August 2017: Donald Trump announces the deployment of more troops to Afghanistan to counter the re-emergence of the Taliban.

September 2019: Peace talks begin between the US government and the Taliban.

February 2020: After many ups and downs in the US-Taliban peace talks, the Doha Agreement was signed between the two sides, one of the main provisions of which was the withdrawal of US troops from Afghanistan.

September 2020: Inter-Afghan talks begin in Doha, Qatar, with the presence of Abdullah Abdullah, Chairman of the Supreme National Reconciliation Council of Afghanistan, US Secretary of State Mike Pompeo, the Afghan government delegation, and the Taliban.

Under an agreement signed in February 2020 between the Taliban and the United States, the United States was scheduled to withdraw its entire army by May 1 this year, but their withdrawal was eventually postponed to September 11 by Joe Biden’s decision. Withdrawal from Afghanistan coincides with the twentieth anniversary of the US-led invasion of Afghanistan following the 9/11 attacks on the World Trade Organization towers in New York. There are currently at least 2,500 US troops and 7,500 NATO troops on Afghan soil.

In the Doha agreement between the United States and the Taliban, which was signed last year, the Taliban pledged a ceasefire with the International Coalition Forces until the withdrawal of these forces by the first of the month. On Saturday, May 1, US and NATO forces officially began the process of withdrawing their troops from Afghanistan, which will be completed by September 11, according to a new decision by US President Joe Biden.

The Afghan peace process was supposed to be concluded a long time ago, but the talks have not progressed for months. At first, it took months to release the Taliban prisoners, then an agreement on the principles of direct talks between representatives of the Islamic Republic of Afghanistan and members of the Taliban lasted three months, and it is not clear when the talks will resume. What can be deduced from the above points is that peace will not come to the country so soon and the stream of blood will not stop.

What can be noted, however, is that the Taliban have so far gained more ground in the negotiations without the other side being the Afghan government. The Taliban can use the tactic of not participating in the talks on the one hand until September and on the other hand use this tactic to achieve more. In addition, the withdrawal of foreign troops from Afghanistan gives the Taliban the feeling that they consider themselves victorious and refuse to make concessions in peace talks and accept the demands of the Islamic Republic of Afghanistan. They will also think that after the withdrawal of foreign troops from Afghanistan, they can gain power militarily and achieve their goals.

Implications of U.S withdrawal from Afghanistan

Although President Ghani has sought to maintain the confidence and morale of the people in the face of the withdrawal of US and NATO troops from Afghanistan, there is considerable concern about the implications of their withdrawal in Afghanistan and the region President Ghani had proposed many times, that if the Taliban were ready to talk, he would give up what remained of his presidential term, and hold re-election in which the Taliban were free to participate. The Taliban have always rejected elections as un-Islamic, and the government of Afghanistan as a “puppet” of the US. Ghani’s proposal gained no traction.

Given the possible warnings of the consequences of the withdrawal of foreign troops from Afghanistan, the Islamic Republic of Afghanistan should also take certain measures. The leadership of the government and political groups must put aside political and personal differences and work together to confront the Taliban. In recent days, it has been seen that the Republic’s side still does not agree on a single plan to participate in the Istanbul Summit, and the composition of the delegation participating in the Summit is another unresolved issue. The persistence of this divisiveness, selfishness, and hypocrisy on the part of the Islamic Republic can provide an opportunity for the Taliban and also weaken the power of the Islamic Republic at the negotiating table.

Based on past experience, it can be said that in the current situation, there is no unity of opinion and the principle of unity in the structure of the Afghan political system that can compensate for the consequences of the withdrawal of American troops. On the other hand, over time, supporters of the Taliban in the region are becoming more visible and the military strength of the group is increasing. The Taliban never want to be integrated into the current political system, they seek to revive the Islamic Emirate in Afghanistan, which will bring the Taliban closer to their goals with the withdrawal of US troops. Therefore, the danger of a confrontation between the supporters of the Republic and the Emirate in the post-US withdrawal phase in Afghanistan is very high. Even the civil war and the defeat of the 19-year-old caravan of democracy on the path to progress and prosperity and Afghanistan are sounding the alarm. But if the national unity government pursues its fragile policies, it will not be able to meet the challenges ahead. What is expected is that the political leaders of both teams, by creating a joint working team and creating an internal consensus of politicians and members of the government, will facilitate the conditions for sincere cooperation to strengthen the republic and counter the growing threat of US troop’s withdrawals in Afghanistan. Formation. Conditions that meet the needs of Afghan society; On the one hand, to strengthen the conditions for internal cooperation for the effectiveness of the governance work, and on the other hand, to respond to the growing threats posed by the presence of terrorist groups in a timely and effective manner. If such effective action is taken, the withdrawal of US troops could be seen as a turning point in Afghanistan’s security self-reliance and strong hope for the future. Otherwise, the irresponsible and premature departure of the United States, as Afghanistan’s strongest ally, could turn Afghanistan and, ultimately, the region into a hotbed of international extremism and terrorism.