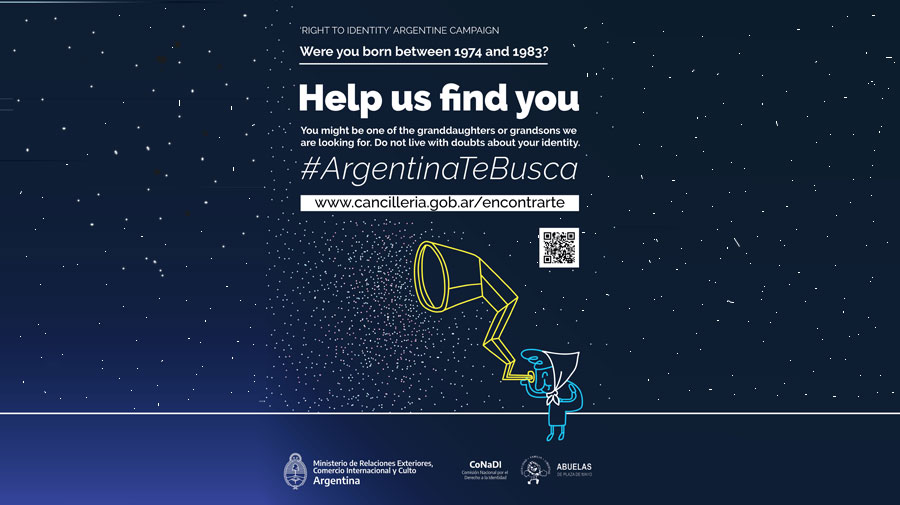 Did you know that the Argentine Government, the Grandmothers of Plaza de Mayo and relatives are still looking for more than 350 granddaughters and grandsons who live with their false identities?

During the last civil-military dictatorship in Argentina (1976-1983) massive human rights violations against the civilian population were committed, including the abduction of about 500 babies, girls and boys, who were separated from their families and grew up with a false identity.

The victims’ families promptly started to look for them gathering at different human rights organizations, which are an emblem today both in Argentina and around the world.  In April 1977, the human rights association named Mothers of Plaza de Mayo began to assemble at Plaza de Mayo square, opposite the Argentine Government House, in the city of Buenos Aires, demanding to learn the fate of their daughters and sons.

Ever since the restoration of democracy, on 10 December 1983, and through the different branches of Government, Argentina has gone through a long Memory, Truth and Justice process.

After genetic science had discovered the “Grandmotherhood Index”, the possibility of proving the biological ties the abducted children and their grandmothers –absent their parents−, the National Bank of Genetic Data (BNDG) was created at the request of the Grandmothers of Plaza de Mayo. The BNDG stores the genetic data of all families looking for their granddaughters or grandsons. In 1992, the National Commission on the Right to Identity (CoNaDi) was created, within the purview of the Ministry of Justice and Human Rights, to foster the search for daughters and sons of disappeared persons and for those who were born while their mothers were illegally detained, with the aim of finding them and restoring their identity.

Thanks to the tireless work of the Mothers, Grandmothers and the Argentine Government since the restoration of democracy in 1983, 130 cases have already been solved and their identity restored. The identity of about 350 persons is yet to be determined.

On the National Day of Memory for Truth and Justice, 24th March 2021, the Foreign Ministry launched the International Campaign for the Right to Identity assuming this search as its own.

This is an outreach campaign to be conducted by the Foreign Ministry through all its offices during this year, so that people with doubts about their identity, or about someone else’s identity, may contact Argentine consulates abroad for guidance.

The initiative was developed with the National Commission for the Right to Identity (CoNaDi) and Grandmothers of Plaza de Mayo, which participated both in the preparation of the outreach material and in the training of the consular staff.

Who we are looking for

Today the granddaughters and grandsons of the Grandmothers of Plaza de Mayo are between 40 and 45 years old. They are adults who might have migrated for multiple reasons and so they might live anywhere in the world. Many of them might be mothers or fathers and, some of them, even grandparents.

They might be anywhere in the world. Their own families, the Grandmothers of Plaza de Mayo and the Argentine State are still looking for them.