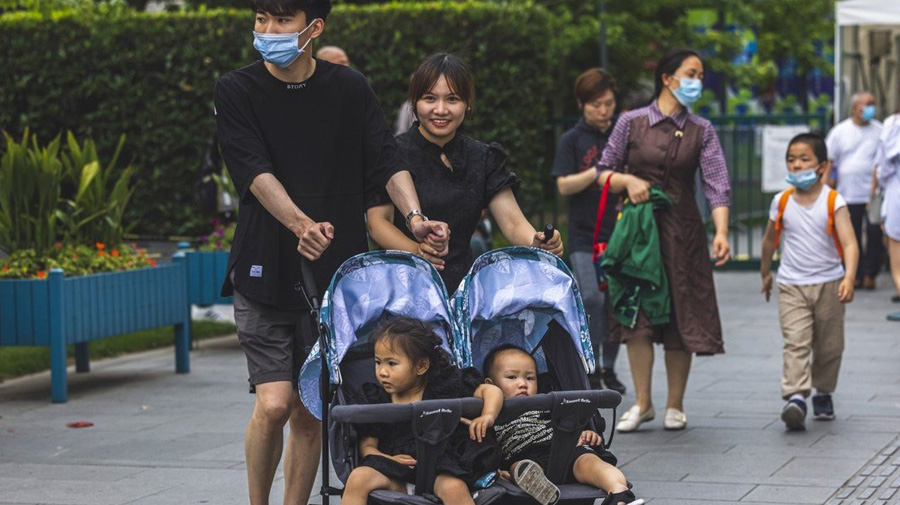 What a turnaround as China makes a revolutionary departure in its approach to social engineering. The recent shift in China’s one-child to three children policy is full of profound implications not only for Chinese society but it needs to be judged also from the perspective of China’s hegemonic aspirations and its probable impact on international politics and the future trajectory of economic trends around the globe at large. As we shall discuss in this paper that this policy change reflects the maturity of realization and futuristic vision of its present leadership to mend its “worst policy mistake in the post-Mao era”. In the three-part analysis we shall unravel the issue.

As we know the Chinese government announced this controversial one-child policy in September 1980, i.e. in the backdrop of its conscious decision towards reform of the economy through ‘four modernizations’ of Premier Zhou Enlai followed by Deng Xiaoping’s ‘open door’ policy and concomitant reforms. No doubt, the idea was to gradually adopt an open market economy, hence encourage competition without the ‘shock therapy approach’. It meant Chinese society had to be prepared accordingly for the take-off stage. In other words, economic growth could not be achieved merely with economic policy changes viz. privatization or by wooing investment in Special Economic Zones. It required tab on population growth as integral to creating conducive conditions for greater human resources and new job opportunities. Otherwise more people meant more crowding in the job market as well as more deprivation, corruption, skewed distribution and less growth. Hence by the end of the 1970s, China perceived the crying need to replace the previous system of voluntary family planning with the deliberate introduction of the one-child policy which would be in sync with rising living standards.

In fact, China’s one-child policy constituted a part of its comprehensive planning, and follow-up actions in pursuit of empowerment of gender, to reduce urban-rural divide, etc. Thus, the one-child policy became synonymous with a radical restructuring of Chinese society and a watchword of China’s modernization. Initially, however, it was narrowly conceived in terms of poverty reduction. It was assumed that once a prosperous economy would be built, people would voluntarily follow the suit. It may be noted that before it became a government policy it was largely a matter of propaganda campaign by the CCP “urging late marriage, long birth intervals and fewer children” and gradual emphasis on coercive measures that brought down the birth rate. But the government was looking for a quicker solution to the population boom, hence enacted the one-child policy in 1980 for each couple “which aimed to accelerate China’s transformation into a wealthy, modern, global power”. In other words, centering on one child family China officially wanted to construct a development model in which family planning, educational facilities, health infrastructure, life expectancy, values of social wellbeing were all interconnected. To play down the voice of the critics, China very intelligently promoted the one-child policy as part of the larger campaign of national prosperity and good life. That is why, although birth control policy is said to breach people’s choice and even when the people in the countryside were strongly opposed to it, China thought its agenda of social engineering to be more important than the target of vibrant and balanced social relationship. So more it moved to open to capitalism during the 1980s and 1990s, correspondingly it ruptured the natural social balance and the gender ratio in society with increasing female foeticide and even giving rise to only male child’s highly unsustainable demands or what is called “little emperor syndrome”. Thus, it failed to visualize that its one-child policy would be a boomerang, a potential liability that would force China to discontinue it.

It shows its policy approach to population control was grossly erroneous. The assumption of the policy turned out to be a misnomer in the long run. No doubt, it had certain dividends in terms of slowing down the rate of population growth and overcoming pressure on health infrastructure. But its unforeseen consequences were largely negative which offset the benefits that accrued from the policy.

It is not that only the West is out to project China for its illiberal control over society, moreover, China’s soft power appeal also suffered due to its coercive measures like compulsory sterilization to check obtrusive population growth. It may however be noted that the one-child policy was relaxed before in some cases that included “ethnic minorities, people living in the border areas, Chinese returned from overseas and the couples whose first child was disabled…” Now the question arises if the Communist party leadership is so much alert, why did not it take a revised stand earlier? Maybe it is due to its inner bureaucratic structure to rethink the impact of such restriction. Consequently, China started to ease the restrictions in 2013. It allowed the couples to have two children if one of the spouses was the only child. So, it was not a sudden policy change on China’s part when on 31st May 2021 China’s official news agency reported that henceforth China’s married couple would be able to give birth to three children each. Even in October 2015, CCP announced that all married couples would be allowed to have two children. So what is discernible from China’s policy is not a radical switchover by upholding a diametrically opposite line which seems apparently contradictory. But China’s deeper calculation and planning seem to have prompted it to arrive at such policy revision in a phased manner.

All countries in the globe need to have balanced population growth, though the importance of population as a component of national power can hardly be exaggerated. It should be kept in mind in this context that both the numerical and qualitative aspects of the population of a state have to be taken into consideration. More what needs to be noted is that factors such as age, sex, birth rates, health, literacy, culture, etc. are very significant determinants in shaping the quality or the national strength of population of any state. If any deviation occurs in a country from these norms, more or less problems are bound to occur in different fields of the concerned country. Still in reality it does not always match since somewhere we can see more population than a requirement or somewhere less population can be seen. Incidentally, China has been coping with overpopulation, its Achilles heel, since its beginning. Under this situation, China has long had strict population control so that China’s rise on the global stage is not endangered by the phenomenon of overpopulation. By intense contrast, China, the most populous country in the world, is ultimately on the way to relaxing that strict rule of family control. So, it will be worth judging to delve into the deeper layers of thought in search of probable answers to this policy shift.

It is learned that Xi Jinping, the present Chinese President, at a recent politburo meeting has agreed to this decision of ‘Three-child policy’ to be executed in China. The statistics released in early May 2021, show that China’s birth rate is at an all-time low level now. China has not had so few children in the last few years since 1950. The calculation is 1.3 children per married woman.  A large part of the population of China has now moved towards old age, much like Japan and Italy, as a result of the strict birth control policies prevalent for decades-long. As a result, Xi Jinping Government has decided to change its policy in search of a new generation.

On the other hand, it is interesting to note that it was not only the government imposed restriction but the one-child policy has gradually won substantial popular endorsement because the cost of living in most of the cities in China is so high that ordinary people cannot afford to have more than one child. This time too, the commotion of the common people has started on the social medium. Most of the couples said: they cannot afford to raise three children even if they want to. One wrote on the Chinese micro-blogging social networking site ‘Weibo’: I also want to have three children, but it will take at least 50 million Yen a year. This is apparently the interpretation of the Chinese government’s present policy; but looking down, it seems that there is something deeper hidden implication behind this ‘three child policy’.

Hence there is no place for prevarication that there is the two-pronged strategy behind this population augmentation policy on the part of the Chinese government. The general or economic explanation of the ‘three children policy’ is well understood. The hidden or undisclosed purpose of the Chinese government is its imperial motive or neo-colonial expansion in West Asia, Africa and Latin America. China clearly understands that its trade war with the US might be over but its OBOR requires the huge overseas deployment of Chinese personnel which may be hampered due to the small family and aging population. That is why, when it wants to masquerade the West by withdrawing from its earlier one-child policy, indicative of violation of basic human right, thereby trying to shed its hitherto intent of social intervention, in fact, its new policy shows how much it has penetrated the social body to fulfill its mission. After all, the change of policy is inevitable as China’s integration with globalization becomes intense and its rivalry with the US gets aggravated and manifest.

Before we conclude, let us note two more points: a) recently there was no natural calamity which could result in remarkable loss of human lives in China and b) China despite its rapidly modernizing military arsenal is not going to recruit more youth in its military forces, rather it has announced a cut in the size of army personnel. As such, we believe that in the future China might deploy its additional people for managing territorial disputes, for building and modernizing infrastructure, even by reviving ancient routes for trade, for penetration into Gulf, Africa and Central Asia for decentralized production and distribution. Besides, its 3-children policy has an irrefutable popular appeal that might strengthen the hands of the Chinese state via populism and nationalism.