Diplomatist > Regions > World > Home Featured > The ‘Bromance’ of the Persian Lion and the Red Dragon: Debt Trap Neo-Colonialism in Making?

The ‘Bromance’ of the Persian Lion and the Red Dragon: Debt Trap Neo-Colonialism in Making? 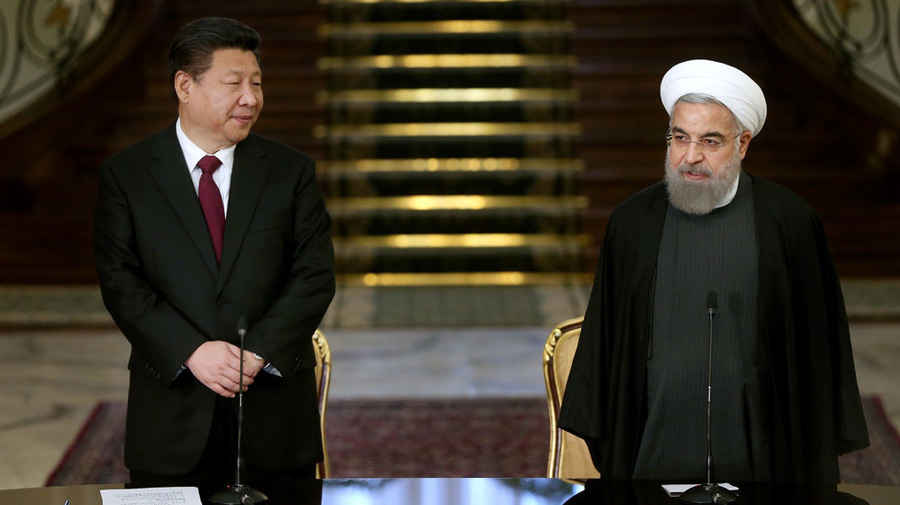 Recently, China and Iran signed a $400 billion 25-year strategic cooperation pact on the 50th anniversary of the founding of diplomatic relations between the two countries that incorporates political-economic and strategic components. Chinese foreign minister, Wang Yi, in his recent visit to West Asian nations, submitted a five-point initiative for realizing stability and security in the Middle East, bolstering equity and justice, promoting mutual respect, achieving non-proliferation, simultaneously encouraging cooperative security and stimulating development partnership. Also, a representative from the Foreign Ministry of Iran announced that the agreement with China presented the comprehensive road map for Iran to carry on its foreign policy for the following 25 years and is expected to intensify the ties between China and Iran and would set a design for two-sided investments in several domains such as ports, energy, transport, industry and services that will likewise play a part in the Belt and Road Initiative (BRI). The Iran-China deal is being watched closely by the world, particularly at a point when the red dragon’s pugnacious actions are expanding across the globe including Antarctica and the Arctic. The agreement moreover enables China to perform a more sweeping role in one of the most vital regions in the world.

China’s magnifying presence in the Middle East, its leveraging diplomacy and strategic ties with Iran are forming a new boiling point with the United States (U.S). As part of the deal, China would raise the import of Iranian oil in resistance to the U.S embargoes. China’s increasing influence in Africa and East Asia has bedeviled the U.S interests; furthermore, the Middle East is the next arena on which China can irk the U.S. supremacy through Iran. Both Iran and China have authoritarian governments and traditional narratives that portray the international system as inequitable and overlooked by Western governments. China–Iran ties began in 1937 though both nations have had a history of social, political, and economic exchanges through the Silk Road. There were unofficial trade ties during the cold war between China and Iran that firmly expanded over time. However, ever since Xi Jinping came to power in 2012, the Communist Party of China (CPC) has displayed a more recalcitrant and unyielding ambition to make China a global horsepower and to strike a more dynamic role in other regions. This ambition was further displayed in launching the BRI, which stressed the imperative value of the Middle East.

At present, China is the sole dominant player active in the Iranian oil patch. China regards sanctions on Iran as an opportunity to secure large markets and fields, which might have gone to Western companies if the sanctions were not put in place. Iran signed the BRI in 2019 where it is supposed to play a pivotal role in China’s geopolitical aspirations in Central Asia and the Middle East. The brand-new strategic cooperation of Tehran with Beijing will provide the Chinese with a vital foothold and empower Iran’s economy and regional standing. China has previously been increasing its maritime and armed presence in the westward Indian Ocean, and the decisive agreement with Iran will serve China to expand its trails in the region further where it can attain a competing “trump card” over India in getting developmental projects though the latter has had strong and friendly relations with the Gulf Countries. As the majority of China’s oil passes through the Strait of Malacca, a choke point and troubled piracy passageway, China is looking for alternative energy requirements in the west such as the Gwadar-Kashgar pipeline project under the China Pakistan Economic Corridor (CPEC). The security at the Pakistan-Iran frontier region is also crucial for China for the advancement of the CPEC project. Also, Iran has proposed to construct a liquefied natural gas (LNG) pipeline to China along the CPEC route. To ensure its survival, Iran has taken the benefit of the bilateral relations by playing the “Chinese Card” to strengthen its regional status and China that has been the biggest crude importer from Iran, post-COVID their proximity has evolved more. The proposed fifth plenary session’s 14th five-year plan at the end of 2021, which will put in place the guiding policies of China’s economic development from 2021 to 2025 of the CPC that is further expected to bring China’s engagement with West Asia and mainly Iran to the spotlight.

The 25-year agreement has been deemed to be the economic salvation for Tehran being hit by sanctions apart from being cash strapped economy by assuring the purchase of its oil and gas to Beijing at a discounted price. China through the agreement wants to heighten its energy security as the Persian Gulf stocks more than half of China’s energy requirements. Iran on the other hand believes that strengthening its mutual ties with China more concretely can bring substantial economic advantages as well as help in its geopolitical ambitions. In 2015, Iran was formally admitted as a founding member of the newly founded Asian Infrastructure Investment Bank (AIIB). There has been a recent debate likewise for Iran, which is an observer of the Shanghai Cooperation Organization (SCO) to eventually attain the status of a member in the near future. China has also aided in the advancement of Iran’s nuclear program through the transfer of machinery and technology. The military co-operation is yet another aspect of their bilateral ties where China would also be permitted to use the Iranian airbases where there are implications that the decisive matters has the backing of the Iranian Revolutionary Guards Corps who dominate over the strategic matters affecting Iran. China is also planning to develop free-trade zones in many parts of Iran such as Maku, Qeshm and Abadan. As per reports, China will likewise station nearly 5000 Chinese security staff to guard its projects in Iran. Apart from that, Beidou, the Global Positioning System (GPS) of China has also intended to support Iran’s cyber specialists in regulating what is shared in the country’s cyberspace flagging the way for Iran to develop a “great firewall” just like in China.

Through the present deal and the expanding affinities between Iran and China, BRI could gradually become a basis of ambivalence in the Middle East, which may end in greater competition by countries to attract Chinese financing and interest. Some foreign affairs experts claim that Iran can utilize its connections with China to establish more ties across Asia while remaining shielded from possible U.S. intervention. Nevertheless, several experts have stated that the landmark deal will have far-reaching ramifications for the region. Mahmoud Ahmadinejad, Iran’s former President has asserted that Iran will not recognize the secret 25-year-old agreement and cautioned that any deal authorized with a different country without the citizens knowing about it will be invalid. An Australian based Iranian expert on technology, Reza Hashemi, has also reprimanded the impending launch of a 5G network in Iran. Hashemi argued that the whole world now knows that the Chinese company, Huawei has been blamed for engaging in spying activities and likewise questioned the actual intention behind bringing the Huawei technology to Iran. A non-resident fellow with the Center on Middle East Policy at the Brookings Institution, Fathollah-Nejad has pointed out that China has a very morose and negative image in Iran where the “shoddy” or “gimcrack” Chinese products have hurt the advancement of local industry apart from China’s role in spreading of the coronavirus. Also, the highly educated and young people of Iran are concerned about China’s potent control over the Iranian people’s access to the Internet and further distress from censorship although Iran has refuted denunciations that it is “selling” Iran. Many experts stated that Chinese entry into Iran was also to seize the “Chabahar project”. In this context, the Chinese firms have often grappled in Iran wherein some projects in the past have faced setbacks like the “North Azadegan oil field”.

The big dilemma among various global experts and Iranian citizens is whether Iran’s engagement with China could conceivably deteriorate the relations between the Iranian citizens and its government in the future. Lamentably, the 25-year agreement has likewise been compared to the “Treaty of Turkmenchay” by some Iranians, which forced them to cede control of many areas in the South Caucasus to Russia in 1828. The Iranian administration and its domestic economy is already grappling due to its inaccessibility with global capital and the Persian Lion amidst this has gradually become something of a cat’s-paw in the Red Dragon’s laden association with the U.S.

The red dragon’s hunger for energy needs in the long term can also further corrode the “petro-dollar hegemony” of the U.S where China might end up turning Middle Eastern suppliers to accept payments in “Renminbi”. Also, China-backed Iran-Pakistan-Taliban alliance building in India’s immediate neighborhood will be an issue of grave concern for India. China is always looking for expansion and diversification of oil and natural gas reserves and chooses to eschew over-dependence on any one trading ally. Co-operating closely with Iran politically may exacerbate its strategic allies like Saudi Arabia and Israel in the realm.

China’s intention to expand economic ties through “Cheque-book diplomacy” with its “eye-catching big deals”, “gateau like contracts” and “land grab strategy” in many nations to satisfy its appetite for raw materials and energy resources however end up in topsy-turvy-dom and wild disarray which China calls it “developmental peace”. The reality of “peaceful development” that China chooses to bring to has in fact invited “exasperation” and “economic crisis” putting various countries in serious debt with the recent instance being, the economic quandary in Pakistan on May 2021 that was intensified after China refused to provide debt relief. A curious question that arises is whether the increasing Chinese-Iranian ties will unavoidably change the political panorama of the region in favor of China besides impairing the U.S. sway or whether the “Bromance” will plunge into “Chinese neo-colonialism” and its expansionist policy through yet another “debt-trap diplomacy” just like Pakistan’s CPEC or Sri Lanka’s Hambantota port. Nevertheless, the post-COVID world will witness the change of balance of power in West Asia from this fledgling bilateral alliance.